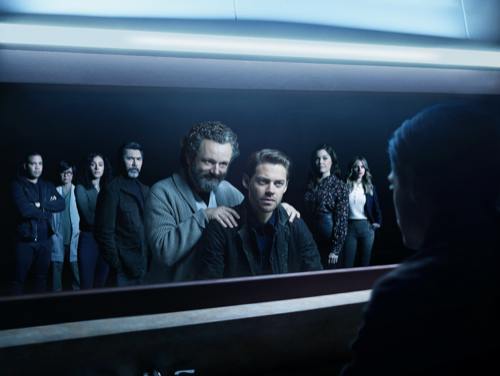 Tonight on FOX their new crime franchise Prodigal Son airs with an all-new Tuesday, January 12, 2021, episode and we have your Prodigal Son recap below.  On tonight’s Prodigal Son season 2 episode 1 Premiere called, “It’s All In The Execution,” as per the FOX synopsis, “Bright finds his personal life in disarray after his sister’s shocking actions. Now, he has to “take care” of her and protect his mother Jessica from a secret that could tear the family apart all over again.

To distract himself, Malcolm takes on a new case and must find the killer behind a recent beheading in the city and the only person he can turn to for help with the case is his father. Meanwhile, Martin returns to Claremont to a surprise new roommate.”

Malcolm found himself on a ledge. He was out there. He was thinking and he wasn’t alone. He was joined by another man. He also knew this man other man, but the other man didn’t know him. Malcolm had profiled his partner. He profiled that this man was the Penthouse Slasher and that he would come to that apartment looking to murder a whole family. Malcolm made sure to stop him. He also went out onto the ledge because he knew the slasher would turn to something drastic if he couldn’t do what he wanted and he was right. The only thing Malcolm got wrong was that he profiled the slasher would have gotten rid of the weapon. And it turns out he was wrong about that because the slasher tried to stab him once he realized that Malcom identified him.

It was a good thing Malcolm was tethered to a heater. Edrisa had tied the knot and she was great at it because she went through an S&M phase back when she was living in New Jersey. Her knot meant Malcom didn’t have to worry about falling. He was able to fight off the slasher and he even ended up saving the other man’s life. He stopped the slasher from falling off the ledge. He also made sure that his team was able to arrest the slasher and that worked out swell for JT. JT is the current head of the Major Crimes Unit. He stepped into the spot after Gil had been seriously wounded and so this might not be a permanent position. He was just the de facto head. He was still closing cases and his department had a great reputation thanks in large part to Malcolm.

Malcolm was a great profiler. He got into a killer’s head and he was able to do so because he studied serial killers after finding out his father was one. His father was the serial killer known as the Surgeon. His other name was Dr. Martin Whitly and he was once a respected surgeon known for cutting edge surgeries. Only Martin gave all of that up in order to pursue his real passion which was killing. He loved finding and cutting up women. He was doing a great job of it too until his son figured out what he was doing and he called the cops on him. Malcolm brought down his father, but that didn’t end their relationship and the two still talked. Malcolm even turned to his father after his sister Ainsley killed a very dangerous man.

Malcolm received advice from his father on how to get rid of the body. He cut up the body based on his father’s word and so Martin now believes they’re partners. They’re partners in crime. Martin called Malcolm the second he was released from general population. He called him when he returned to the asylum and he tried to continue to their newfound relationship, but that was impossible with him now having a roommate. Martin was roommate with a guy who barked at people and he was very off-putting. Malcolm didn’t want to talk about the crimes he did in front of the other man because he wasn’t sure if that man could be trusted. Malcolm only visited his father because he needed hep with his new case.

Major Crimes was investigating the murder of Millie Lee. She was found decapitated in the park and her boyfriend was missing. Her boyfriend Boyd Hicks moved to New York with her from Texas after her husband died. Her husband was murdered as well. It was believed that he was killed by a disgruntled employee. Except there were whispers. Many believe that Millie had something to do with her husband’s murder because it was too convenient that her rich husband dies at the perfect moment and she runs off with her contractor. Millie started a new life for herself in New York. She has an expensive attorney named Natalie Barba and even Barba seemed to believe the rumors. And so Malcom created a profile.

Malcom believes they were seeking a justice-seeker. Someone who knew Millie and her boyfriend murdered her husband for his money. Malcom and Edrisa both realized that Millie had been killed by a guillotine. The last guillotine sold in New York was back in 1996. Malcom was too young to remember it and so he turned to his father because he knew his father liked ancient murder weapons as well. His father did remember the buyer. It was some rock star and so Malcom went to the rock star’s home with Dani. They saw the guillotine for themselves. The weapon was too heavy to move. The killer must have used it in its place and so Malcom tested it. It showed that it had been used as the murder weapon.

There was also a sound coming from right below it. Malcom asked the rock star what was there and he was told it was a sex dungeon. The sex dungeon had been walled off by time Malcom and Dani found it, but Malcom tore down the hastily built wall and he found Boyd. Boyd had been tied up in chains. He was left there to slowly die because the person he and Millie let take the blame for her husband murder – that young man had been executed by the state of Texas. This is why both Boyd and Millie had to die. They killed two people with what they did and Boyd’s hazy confession to Malcom helped Malcom put the pieces together. Malcom believes the killer they’re looking for is the executioner from Texas.

The executioner had killed the wrong man. He now has to kill the right people to make peace with what he did and there were some red herrings along the way. There was the lawyer, Natalie. She was apparently the man who died’s younger sister. She took a job working Millie because she wanted to find evidence of Millie’s guilt and she was going about things the right way while the executioner was just killing people. The executioner later turned up at Malcom’s apartment. He showed up after he heard that Natalie had been arrested for his crime and he broke into Malcom’s apartment because he’s been watching the investigation. He’s seen how Malcom works. He thinks he and Malcom are similar to each other.

The executioner demanded that Natalie go free. Malcom said he couldn’t do that because of the evidence and so the executioner threatened to kill Malcom. He said that way the police would know for a fact they’ve got the wrong person. So, the executioner and Malcom had a battle. They fought with Malcom’s many weapons he has lying around his house and Dani came in just as Malcom had overpowered the executioner. She arrested their guy. She told Malcom to calm down and that’s when they heard the sounds coming from outside.

A cop had mistaken JT for the suspect because he was person of color. This cop called JT a boy and he tried to choke him out. JT had to push him off, but that made the others officers all point their guns at him and so it’s a good thing Dani and Malcom showed up to vouch for him else he might have been killed by his fellow cops. And still in spite of that officer being in the wrong, JT was afraid this would be the end of his career.

Thankfully, Gil came back. He was going to speak up for JT and so JT needed to worry.

And at the asylum, Martin tried to kill his roommate with electrocution and he instead cured the man. Jerry now speaks in full sentences. His doctors also took the suggestion that electroconvulsive therapy would be good for him and so Jerry was off getting treatment while Martin got his room back to himself. And now he can talk to Malcom whenever he likes.