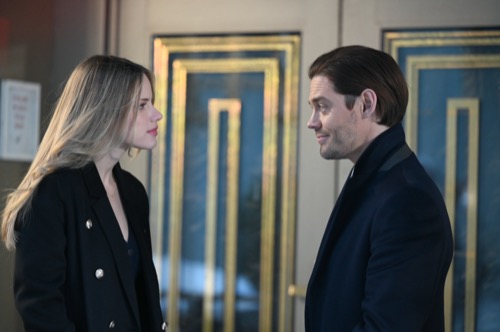 Tonight on FOX their new crime franchise Prodigal Son airs with an all-new Tuesday, February 16, 2021, episode and we have your Prodigal Son recap below.  On tonight’s Prodigal Son season 2 episode 6 called, “Head Case,” as per the FOX synopsis, “While the team investigates the murder of an architect who was tasked with renovating a supposedly haunted hotel, Bright is knocked out and falls into an elevator shaft.

Trapped and unconscious, he imagines an alternate reality that finds him leading a semi-normal life in which his father, who is not a serial killer, helps him solve the case.”

Jessica Whitley was concerned. She was concerned for her children. She learned that one of them killed Endicott and that the other made it disappear. Malcolm covered for his sister. He saw that he wasn’t in the right mind-frame that night and he panicked. He dismembered the body. He made it appear as if Endicott was alive for weeks after his death and worst of all he doesn’t regret what he did. Malcolm would do it all over again if it meant protecting his sister Ainsley. Ainsley doesn’t even know that she committed the crime. She had a blackout and Malcolm did so well in covering it up that he even had her convinced that she had been trying to save Endicott that night. Ainsley thinks that’s how she got the blood on her. She had distanced so well from the actual crime that she didn’t know her brother protected her or that he’s now just as guilty as she is.

Malcolm covered up a murder. He’s now guilty after the fact and he could be sent to jail alongside his sister. This is what has Jessica worried about. Jessica doesn’t want to lose both of her children and she saw what Malcolm didn’t. She saw that Ainsley needed to know the truth. Ainsley couldn’t properly deal with it until she was told that she murdered someone and so Jessica wanted to tell her. Jessica knew she wouldn’t be able to convince Malcolm on her own. So, she went to her ex-husband Martin. Martin was in a psychiatric hospital for the criminally insane and he was thereafter killing numerous women. He wasn’t the perfect partner but he was what Jessica had and so she made do with him.

The two parents agreed it was best to tell Ainsley the truth. They also called Malcolm down to the asylum to inform him about the decision they made and what they were going to be doing. They told him in no uncertain terms that they were going to tell Ainsley. Malcolm didn’t like it. He didn’t think Ainsley could handle the information and so Jessica tried to tell him that his way wasn’t the only way. She said if he had just been honest on the night the murder occurred that maybe they could have spun it. They could have claimed self-defense or claimed mental defects. The last part would even have been true because Ainsley truly didn’t remember the crime. There were so many things they could have done differently that night that it had taken Jessica saying it for Malcolm to realize he made a mistake.

Malcolm came to agree with his parents. He would have liked to have said more, but work called and he responded to a murder carried out at a historic hotel. It turns out the hotel is run-down. It wasn’t operational as a hotel nowadays and the people that lived there pay dirt-cheap rent. The rent is considered to be controlled rent. As in the new owner of the hotel couldn’t raise the rent or try to force them to leave their homes. He instead had to employ certain dirty tricks. Like not fixing the elevator or having noisy work done on the hotel to drive out the renters. Ramon Vieja employed the murder victim Lyle Reynolds to work on the hotel. He wanted to modernize it so that he could turn it back into a profit-making business.

The victim Lyle was later found with a mathematical instrument stabbed in his eye. Someone must have resented the changes he was making to the hotel and Malcolm knew all about that. He liked the hotel as it was. He said it was historic because a few notable celebrities were known to visit the hotel some years and he also recently learned that a murder victim of a famous serial killer had also disappeared from a party held at the hotel back in 1963. Malcolm was able to bond with the people who live at the hotel. He understood why they didn’t want to leave and he also listened as they said they overheard a fight on the night Lyle died. Malcolm later investigated this on his own. He didn’t have either JT or Dani with him. It was just him and his brain.

Malcolm has this urge to solve murders no matter what. He tends to take it personally because of his own past with his serial killer father and so Malcolm took risks he shouldn’t have. He went to the hotel alone. He went poking around and he called Dani when he was able to confirm that the walls were thin there. He also was on the phone with her when he saw someone. Malcolm hung up on Dani to go look for this mysterious person. He got close and unfortunately, he has pushed down an elevator shaft. Malcolm’s mind traveled while he was down there. He went to an alternate universe in which his father didn’t get arrested for multiple murders and it was Gil who was at the asylum. Gil went crazy after he drank Martin’s special “tea”.

Malcolm even had his father in this AU. His father helped him realize that he was still down there in the shaft and that he had to solve the murder to wake up. Malcolm went over the evidence with this false Martin. They talked about the people who lived at the hotel and they determined that the old man who lives there was the Bowery Ripper. The Bowery Ripper was a serial killer back in the 60s who was never caught. He killed with objects that he found at the scene and so he never brought his weapons. It would explain why Lyle was killed with his own device. It also explained why this man has been living at the hotel for so long after everyone else had moved away. Malcolm solved the case in his coma-like state and his plan to wake up didn’t work.

He didn’t wake up after he solved the case. He was still stuck in the coma at the bottom of the elevator shaft and so Malcolm let it play out. He went to dinner at his parents’ house. They discussed Ainsley becoming a surgeon like her father. Malcolm began remembering the real world and how Ainsley actually took after her father. He remembered Endicott. He also realized this universe is what would have happened if he never found out his father was a serial killer. He realized that the women in the box will always be in the box. She will always be suffering and Malcolm will always seek the truth. Malcolm went into the basement. He sought out the girl in the box and it wasn’t until he opened the box that it brought him back to the real world.

Malcolm woke up at the bottom of the shaft. The elevator was heading his way and so he used one of the bones down there to stop the elevator. He also took one of the bones with him as he climbed out of there. He went looking for the Bowery Ripper and just showing the man his work was enough to convince him to come clean. The Bowery Ripper was caught after over fifty years of being on the run. Malcolm had dreamt that he and Dani were together in his dream. It sorta made things awkward when he woke up, but he hadn’t told her about what his subconscious had been trying to tell him. Malcolm was keeping that part of the dream secret and that’s where the lies were going to end.

Malcolm asked his sister to meet him at his place. He went home to find her already there waiting and so he used this opportunity to tell her she killed Endicott. He thought she would freak out or try to remember.

But she told him she blacked out again and now she’s covered in blood, but she doesn’t know why.