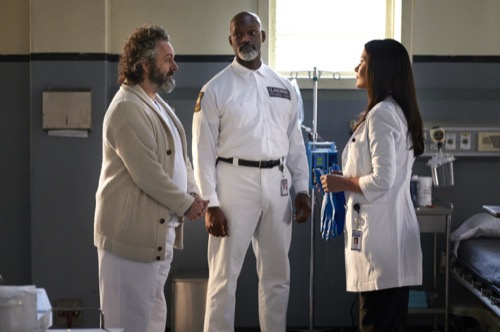 Tonight on FOX their new crime franchise Prodigal Son airs with an all-new Tuesday, March 2, 2021, episode and we have your Prodigal Son recap below.  On tonight’s Prodigal Son season 2 episode 7 called, “Face Value,” as per the FOX synopsis, “Malcolm focuses on a case in which a famous plastic surgeon is murdered; Martin gets a new job working in the infirmary with Dr. Vivian Capshaw; Jessica is surprised to learn her younger sister is in town.”

In tonight’s episode of Prodigal Son it opens in 2015, Malcolm is giving a lecture about murders and he says there is one kind of different murderer, for them, murder is an addiction. They can’t quit, because anyone can do it once, but the second kill, that is when the switch is flipped, and a serial killer is born.

Malcolm is with Ainsley; she has blood on her shirt, and she went to him because she didn’t know where else to go. She asks him why he didn’t tell her sooner than she had killed Endicott, had she known what she was capable of, she could have stopped this.

Malcolm calls his father who tells him he is working in the infirmary and it is honest work, Malcolm hangs up on him when Ainsley comes in the room. He tells her the only advantage they have is to act normal, he tells her to call work sick.

Malcolm leaves, Dani meets him outside and tells him they. Have a new case, they go in an office and finds a man who is murdered, she is a doctor, her name is Nicole. His face is gruesome and has a needle in her eye, she was botoxed to death. Edrisa thinks she was alive when it happened, she was tortured.

Jessica arrives home and her sister is there; she tells her that she should set the town on fire.

Martin arrives in the infirmary, Dr. Vivian Capshaw is there, and she tells him not to kill anywhere in there and do not annoy her. His first job is to clean the bedpans.

Malcolm is with Gil, going over the new case, he thinks the killer could be deformed. Jessica calls him and tells him that her sister is there, she is like a fungal infection and she doesn’t need her family poking around in their lives. Ainsley calls him next; she says she keeps hearing sirens.

Dani tells Malcolm they have the toxicology back; the killer literally gave the doctor a taste of her own medicine. Dani and Malcolm go to see some of Nicole’s colleagues. One of them says she wanted to do the whole pro-bono thing, and they didn’t, so they went different ways.

Gil brings in one of Nicole’s former colleagues, he had access to surgical drugs that were used to kill her. He claims he didn’t do it but tells Gil to look into a former patient named, Francine Depal. She was one of their best patients but then she got addicted to the work, she got to be too much. She fell off the map a few months ago.

Malcolm goes to see Edrisa, she is all dressed up for a date with him when he asks her for a favor and then thanks her and leaves. Meanwhile, Dr. Capshaw is taking care of a patient but tells him she will be back, and she steps out of the room.
Dani ad Malcolm goes to pay Francine a visit, a guy who speaks Russian answers the door, he looks like a doctor and has blood all over him. Dani breaks down the door, they rush in and find some sort of surgery going on. Francine is there, she has a dark veil on, she lifts it, and when she doesn’t her face is swollen from recent overdone plastic surgery.

Martin is left with the patient, he tells Quintin, the patient, that he looks dehydrated. Dr. Capshaw walks in and finds Quintin on the floor, Martin tells her that Quintin has a brain bleed, she needs an ultrasound machine.

Malcolm is speaking with Francine, she says the doctors dropped her when she had so much surgery left to be done. Dani asks her why she dropped her lawsuit. Francine says that Donahue and she came to an agreement, he supplied her with the solution in exchange for her silence about what they did to poor little Lana. Lana was a student from the UK, Donahue was young when he operated on her and caused a disfigurement. She left the country afterward. Malcolm tells Gil that Donahue fits, he could be the murderer. Gil tells Malcolm that he got a call from Jessica regarding her sister being in town. Malcolm goes home, he finds his aunt Birdie, with Jessica and Ainsley, having dinner, he is not impressed.

Dr. Capshaw is with Martin, he coaches on what she should do to save Quintin. She says if he dies, Martin says to put it on his tab. She starts to screw in the back of Quintin’s head, Martin is close by and guiding her, it worked.

Malcolm sits down for dinner with the three, he is still not impressed. Birdie asks him about what he does for the NYPD. She says if her father was a serial killer, she is not sure what she would do. Ainsley and Malcolm go to get some Bordeaux in another room, she tells him that she left the house because she wanted to retrace her steps and see if she could remember something, and she lost track. Gil calls Malcolm, they can’t find Donahue and he has a bad feeling.

Malcolm and Dani go to the clinic, Dr. Jabra is there on the floor, he has been injected and they are losing him, he tells them Donahue does it. Malcolm comes up with a way to save him, he finds some saline and Donahue’s cocaine stash, he makes an antidote, injects Dr. Jabra, and saves him.

Jessica and Birdie at lunch, Birdie says she is broke, mommy cut her off. Jessica pulls out her checkbook, Birdie promises to pay her back.

Donahue’s bank accounts have all been cleared, he is a famous doctor, Gil says he is not getting off the island. Malcolm says his only shot at a new life is a new face. Malcolm and Dani head back to Francine’s place, the door is unlocked, but there is something in front of it, it is the surgeon, he is on the floor, Dani checks and he is alive. They find Francine, she says Donahue’s recovery nurse, the moment they put him under she went ballistic. They hear screams and run upstairs, Donahue is in the chair, and his recovery nurse, Summer, is about to inject him with something in his neck. Malcolm looks at Summer and says, it is nice to finally meet you, Lana.

She tells Malcolm what Donahue did to her, she is in constant pain, and this is about pain and suffering. Malcolm tells her that she shouldn’t let Donahue come off easy. Let him live, like this, a monster that will wake up every day in a nightmare and be unable to recognize himself in a mirror, that is a real pain. She pulls out the needle, his face is already all disfigured.

Martin is with Dr. Capshaw, he tells her she was savvy with the drill. Then she slips something into his hand before he leaves the room. He looks down at his hand, it is a candy that she had the other day and he longed to have one.

Malcolm is home, Ainsley goes in to see him. He says he ran a DNA test, the blood belonged to a pig, and he knows that this was just a prank. He shouts that he gave up everything for her and doesn’t even know who he is any more to protect her. He tells her this whole thing was completely deranged, she says that she had to make sure that he wasn’t going to mess with her head again. Then she says, nobody does this murder stuff better than them.

Lake Peipus, Estonia, Endicott’s head is found in the water, Euro police, Simon Hoxley is at the scene. He says someone tried really hard to make it look like he was killed in Estonia, but he wasn’t and he is headed to New York City.