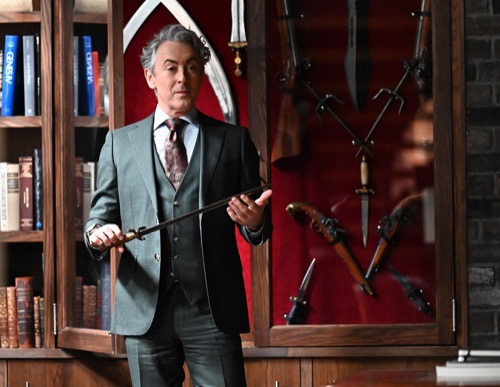 Tonight on FOX their new crime franchise Prodigal Son airs with an all-new Tuesday, April 13, 2021, episode and we have your Prodigal Son recap below.  On tonight’s Prodigal Son season 2 episode 8 called, “Ouroboros,” as per the FOX synopsis, “A world-famous profiler shows up in New York and claims that Major Crimes’ current case is connected to the discovery of Endicott’s body overseas; Martin gets to know Dr. Vivian Capshaw.”

On tonight’s episode of The Prodigal Son, Aunt Birdie moved out. Jessica’s sister was a pain to deal with on her best days and so the whole family was glad to see her gone. However, it now gives Jessica the free time she needs to focus on this family. Jessica is worried about her children. Malcolm helped his sister Ainsley cover up a murder and it was fine at first because Ainsley didn’t remember she killed someone.

She had been in the throws of a fugue state. She completely dissociated from what she was doing and she had no memories of it once it was over. It wasn’t until months later that Ainsley began questioning the story her brother gave her. She eventually pushed him into revealing the truth and now she knows she’s killed, someone. And for some reason, she doesn’t really care.

Ainsley takes after their father. Ainsley and Malcolm were the children of the notorious serial killer known as “the Surgeon” and whose real name is Martin Whitley. Their father has been in an asylum for the criminally insane for years and he just recently started to receive privileges. One of those privileges is his chance at working with the doctor on site. Martin has gotten to see the inside of a medical building again and he was now closer to tools he can use for his escape.

Martin, therefore, was busy. He knows what Ainsley did and he’s had nothing to do with it besides giving advice on the phone but Malcolm went above and beyond for his sister. He covered up the murder. He also used Nicholas Endicott’s own courier chain to ditch the body in Estonia.

But now there’s a problem. The courier chain dealt with all sorts of illegal goods and so they came onto Europol’s watchlist. Europol’s very own Sherlock Holmes knew as Simon Hoxley was investigating the courier chain when someone began killing people in the chain. Hoxley followed the murders from Europe and he’s here in New York because that’s where the murders were being continued. Hoxley came across Gil’s team in his investigation.

He met Malcolm and he told him as well as the rest of the team about the murders. Hoxley believes the murders all come back to Endicott. He thinks whoever killed Endicott was killing people in the chain to cover up what they did and secretly he suspects the Whitleys.

Hoxley has a file on them. He knows about Endicott’s connections with Jessica and Jessica’s habit of getting involved with serial killers. Not that Hoxley mentioned anything when he met Malcolm. Hoxley instead asked to be a part of their investigation into the murder of Holly Corso. She was a captain on a private yacht and her employer was docked in New York for the night. It was an unplanned trip. It was supposed to take hours and it ended up taking a day.

Holly was also supposed to go out with the rest of the crew when she got a call from someone. Malcolm thought it was from someone she knew and Hoxley thought it was someone from the courier chain. Hoxley turned out to be right, which annoyed Malcolm.

Malcolm met someone on the night he ditched the body. He met a young woman in the chain and she was exactly like Endicott’s other victims. She was young, unsure of herself, and she was a little lost. Malcolm wants to find that woman before the killer does. Only he also has to find her before his team does and the same went for Hoxley.

Hoxley believed Endicott was killed in New York. He also went around to Jessica’s to question her. The two of them had drinks and Jessica accidentally revealed that Endicott may have been killed in her living room. She meant to pass it off as an offended joke while Hoxley took it seriously. He looked around Jessica’s home. He noticed she got a new rug and he mentioned it to her.

Hoxley had Jessica so scared that she later called a family meeting with her children. Jessica told her children at this meeting what happened with Hoxley and that he was onto them. Ainsley wasn’t concerned or even frightened. She said they did a great job with this murder and that Hoxley wouldn’t find anything. Ainsley failed to see the toll it was taking on her brother.

He was running around trying to fix things for her, but she so was ungrateful that she couldn’t see it and her mother had to point it out. Jessica knows that Malcolm isn’t okay. She doesn’t know the full story of everything he’s had to do since Hoxley arrived in town and she’s not sure if she wants to know everything. It’s Malcolm that carries the burden. It always been him and so he dealt with the arising issues.

Malcolm withheld information from his team. They were going through names of people that could possibly be connected to this courier chain and he didn’t tell them when he recognized one. He followed up the lead by himself. He came across a dead body and his first instinct was to take the man’s phone.

He also cut off the man’s fingers so that he could unlock the phone. Malcolm is smart enough to know he can only use the phone for sixty seconds before the locator tracks his location and so he used it at home. He had just unlocked the phone of the latest murder victim when Hoxley showed up. Hoxley confronted him about Endicott. He claimed he could prove Malcolm murdered the man and that he only did so to curry favor with his serial killer father.

Hoxley is apparently writing a book. His first book was a smashing success and it’s been a few years since then. People have forgotten his name. His book was the bargain bin and so he needed to be a big splash with his second book to become famous again. Hoxley wants his second book to be about the Whitleys.

He’s questioned, Jessica. He’s questioned, Martin. He tried to question Malcolm and Malcolm remained calm. He wasn’t fazed by anything Hoxley said. Hoxley even admitted he was going to get a warrant to search Jessica’s house and Malcolm wasn’t scared because he was focused. He wanted to find the young woman. Malcolm later did just that as he found Natalie and at the time she was acting as a private driver.

Malcolm warned Natalie of the risk to her life. She pretended to be scared and soon Malcolm saw right through it. He realized instantly that Natalie was a killer. She wasn’t just some young woman that Endicott preyed on. She was the one running the courier chain. She was the head of the snake and she was killing everyone who could possibly link her to Endicott’s murder. The only person Natalie didn’t want to kill was Malcolm.

She made him get out of the car and she went to the docks to meet Hoxley. Hoxley also thought Natalie was a victim. He didn’t know any better until Malcolm showed up and tried to warn him. Malcolm told him Natalie was the killer. He said that Natalie was on her way to kill him and Hoxley didn’t believe it until Natalie started shooting at them.

Hoxley was shot in his leg. Malcolm treated it and then he told Hoxley that he was going to lure Natalie away. Malcolm did that, but Natalie went overboard and she was told to grab his hand. Only she didn’t want to let go of the gun and that’s what ultimately killed her. Natalie died. Everyone came to assume that she killed Endicott to take over his business and even Hoxley wrote his book about Natalie being the murderer. Malcolm gave him the idea. He said without Hoxley’s investigation into the courier chain, Natalie would never have become spooked and she wouldn’t have started killing people. And so now Hoxley is taking full credit to stop a criminal enterprise.

Malcolm later celebrated this victory with his family. They were all glad to put this behind them and they were taking celebratory drinks while Martin was off flirting with Dr. Vivian Capshaw.

The two even shared a kiss before Capshaw demanded her suture scissors back.