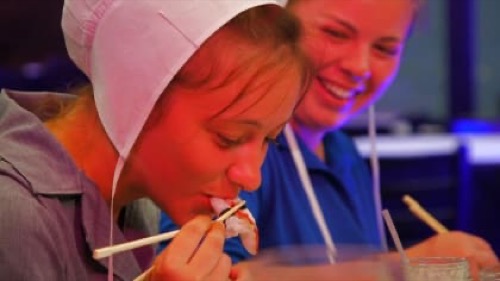 Tonight on TLC Return to Amish, the Breaking Amish spin-off airs with an all-new Monday, April 5, 2021,  season 6 episode 3 called “The Time Has Come,” and we have your weekly Return to Amish recap below. On tonight’s Return to Amish episode as per the TLC synopsis, “Sabrina must head to the hospital alone due to COVID-19”

Tonight’s episode is going to be exciting you won’t want to miss it, so be sure to tune in for our live coverage of the show tonight at 10 PM – 12 PM EST! While you wait for our Return to Amish recap hit the comments and let us know how excited you are about the return of the Amish family.

Tonight’s Return To Amish episode begins now – Refresh Page often to get the most current updates!

In tonight’s episode of Return to Amish, Jeremiah confronts Matt about him giving oral sex to Jethro. Sabrina is so mad that this happened at her baby shower. Jeremiah then tells Ada. Maureen is beside herself. They all want to know why Jeremiah looks too happy. Jethro was going to propose to Sabina but now he isn’t going to.

Daniel and Maureen have phone sex. This freaks her sister out. Later, Jeremiah and Sabrina meet with Ada and Jethro. Jethro admits he has done a lot of bad things but since rehab, he has changed. That is all that matters to Ada and Sabrina.

Ada takes Rosanna and Maureen to a cleaning job. She is cleaning homes in Florida now because of the coronavirus. The homeowner Heidi shows them around her clean house. Ada is annoyed. There isn’t much to clean so this is going to be hard. Heidi is going to be hard to please.

The girls go through Heidi’s closet, looking at her shoes, her coats, and her jewelry. They spray her perfume. She catches them. Ada comes in and lectures them. Heidi laughs. She understands why they would do that.

Jeremiah’s biological father Dennis keeps trying to get in touch with him to spend time. He is afraid to get close to him because he might get hurt. He wants Dennis to do a DNA test since he doesn’t know if this is his real father since his mother is known to lie.

Maureen and Rosanna meet up with friends of Heidi’s. The group they meet is very interested in their Amish lifestyle and has a lot of questions. Maureen and Rosanna also have questions for them about where South America is. Maureen gets upset but doesn’t say anything when she shares she was a school teacher who completed up to 8th grade.

She thinks they must think she is dumb. They all ordered sushi. This is all new to Maureen and Rosanna. Rosanna looks disgusted but tries it. She feels like it is still alive and doesn’t want to puke. They then try wasabi and it is very spicy.

Sabrina and Jethro have been fighting but she needs them to put it aside so they can go to the hospital. She hasn’t felt the baby kick since the night before. She doesn’t want to leave her son behind. At the ER, Jethro isn’t allowed to go in due to covid. When she goes into labor he can go in.

Carmela and Jeremiah take care of Sabrina’s son. He likes Jeremiah. Jeremiah’s wife is a bit jealous of Sabrina because she tried to have a baby but it didn’t work out. They fill a baby pool for Sabrina’s son and play with him. He seems nervous. They miss having little kids in the house.

Later, Jeremiah reflects on his own childhood and adoption. He wants Dennis to be his father but he feels like something is missing. This is all affecting his relationship with Carmela.

Sabrina has been admitted. She is in pain as a nurse assesses her. She is 5 centimeters dilated but needs a c-section. She begins to whimper. She cannot move.