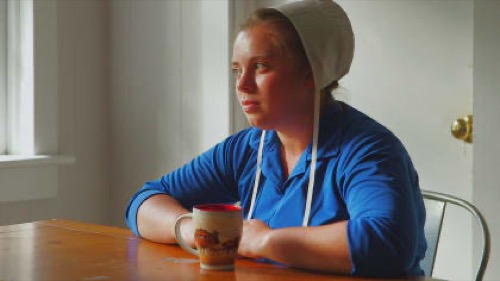 Tonight on TLC Return to Amish, the Breaking Amish spin-off airs with an all-new Monday, May 3, 2021,  season 6 episode 7 called “The Black Sheep,” and we have your weekly Return to Amish recap below. In tonight’s Return to Amish episode as per the TLC synopsis, “After a night of passion with Daniel, Maureen worries about an abnormal itch; Sabrina and Jethro have an emotional face-off; Jeremiah meets his biological cousin; Rosanna goes on her first date.”

Tonight’s episode is going to be exciting you won’t want to miss it, so be sure to tune in for our live coverage of the show tonight at 10 PM – 11 PM EST! While you wait for our Return to Amish recap hit the comments and let us know how excited you are about the return of the Amish family.

Tonight’s Return To Amish episode begins now – Refresh Page often to get the most current updates!

In tonight’s episode of Return to Amish, the episode begins with Ada inviting Sabrina to stay with her in Pennsylvania because she doesn’t know anyone in Florida and she didn’t want to stay in a big house all alone with two kids. She called Jethro and told him that she would be staying with Ada and he wants to see her and the kids, but she doesn’t know. Sabrina arrives at Ada’s house, she is there for Sabrina, she feels really bad for her, that Jethro up and left her.

Ada thinks they need to look out for each other and take care of each other. Sabrina says her mother is mad at her, she thinks this is happening because she divorced and it is God teaching her a lesson. Sabrina says she has nobody. Ada says they are family and they have her back. Sabrina says she is a single mom with two kids now. Maureen is happy that Sabrina is there, she loves helping with the children. Sabrina feels so showered with love and affection, she feels cherished.

Rosanna has a date with Nick and she is so excited. She never had a date before, but this is exactly what she wanted. Nick picks her up to play miniature golf, she is excited to learn how to play. Nick reassures Rosanna that if she listens to him teaching her, she will kill it. He asks her about how dating works with the Amish, she says it is more like group dating. She doesn’t tell him though that in the Amish community, she is not allowed to be alone with a boy.

A guy nearby makes a sarcastic comment that he likes Rosanna’s dress, she thinks Nick is jealous when he responds, but he was actually telling the guy off and told him to be mature. Nick tells Rosanna that she really is pretty. He asks her if he can give her a kiss, she says no. She had fun, but she doesn’t like how hard he tried with the whole kissing thing. He tells her that he is sorry. She had some fun, but she doesn’t think he is for her. Rosanna won’t hang out with him again alone.

Jeremiah and Carmela are on their way to Burlington, MI, to meet his biological cousin, John, and he is worried he may not like him or they may not get along. They arrive at the door and are welcomed by John who invites them in. Jeremiah finds that they look so much alike, he is so excited. John tells him that he looks familiar. Carmela says they look like twins, just Jeremiah is shorter. John finds that Jeremiah reminds him of a mix of his dad and his brother, a tiny bit shorter than his dad, there is definitely a resemblance there.

John shows Jeremiah newspaper articles about his father being murdered, December 23rd, 1981, by Sheila. John says the whole story is tragic and horrible. Sheila died in 1986 at 33 years old. Jeremiah tells him that his biological mother wants nothing to do with him, she says she has all the children she loves. John says he thinks the decisions Jeremiah’s mother made, were not about him. John asks him if he likes who he is, Jeremiah says no.

Jeremiah says he pushes everyone out, he knows he has to take the walls down, but first, he needs to know the truth. John says nobody on his side of the family knew about his existence, they were shocked and here they are, first cousins. John shows him a family tree, others want to meet him. Jeremiah is so happy that he met John.

Clintonville, PA, Maureen, and Rosanna tell Ada that they are sleeping outside, but really, Maureen is going to see Danny and she is camping because it is easier to sneak out and she doesn’t want Ada to catch her. Maureen is a virgin and takes that seriously, but she knows there is nobody else for her. Maureen has a really strong feeling for Danny, she feels super happy, she has butterflies and she feels like she found the one. Maureen is nervous, but she trusts Danny and she is ready to take the next step in their relationship. At 5:02 am, Sabrina is up with the baby and so is Rosanna,

Maureen is not home yet. Rosanna told Sabrina that Maureen was out with Danny and she is sure that she lost her virginity. They talk about Rosanna’s date, she says she was turned off in every way. Maureen comes in, she is as red as an apple in the face, she tells them that they should be in bed. Sabrina tells Maureen she looks like she just got out of bed. Rosanna says she knows they had sex so she might as well just admit it, she hopes they used protection. Maureen says you don’t ask anyone about their sex life it is personal. Maureen asks Rosanna if she is jealous, she says no.

Sabrina asks if it was her first time, Maureen says yes, and they are both too nosy. Maureen says that she did have sex and it was great. Maureen says it felt like lighting a propane lamp. Maureen says she used the usual Amish birth control, she jumped up and down twenty times after having sex. Maureen says this is the dumbest conversation she has ever had and she is going to bed.

The next day, Rosanna is really upset about her date. She tells Sabrina that he wanted to hang out with her, he asked her to kiss, he put their golf balls together and said, see our balls are kissing. She says she wanted to punch him, he was nasty and weird, not even cute either, he was fat. Sabrina wonders if the English world is good for Rosanna because she doesn’t have good reactions. Maureen is up, she tells Sabrina that it burns when she pees and it itches.

Sabrina says that some Amish men don’t have good hygiene and that could be why Sabrina is in pain. Ada comes into the kitchen, she says she knows Maureen was out with Danny and she wants to know what she was doing at all hours of the morning. Sabrina tells Maureen to put a condom on it, and it won’t happen again. Ada tells Maureen that she has embarrassed her by talking about this with everyone, Danny is no good and if he wants to be with you, there needs to be a commitment. Ada thinks Maureen needs to be careful, she thinks she has everything figured out, and she thought so as well when she was eighteen.

Losing Jethro has made Sabrina really feel like she misses him, so she meets with him to see if they can work things out for the children. He gets up and gives her a hug, he wants to work things out with her. He asks about the kids, she says they are fine. She tells him that she is really, really hurt. She says he left her because he didn’t want to be with her and lies to her over and over again. She thinks he is lying about cheating, and If he can lie about that, he can lie about everything. He says he left for a bunch of reasons, it wasn’t because of her and he is sorry he left.

He says he wants to be with her, he just had a lot going on in his head – he never thought what his leaving would do to her. Poor Sabrina looks so upset, she is trying to fight the tears. She tells him that she can’t go through what she did ever again. He says he is sorry he left, he is there now. He loves her and wants to be with her, he acted out and he was wrong. He gets closer to her and puts his arm around her, tells her again that he loves her. In the end, she and Jethro are back together again. He tells her that he wants to go and see the kids.