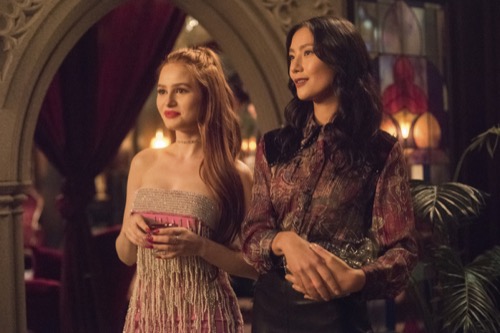 Tonight on CW their drama Riverdale airs with an all-new Wednesday, March 17, 2021, season 5 episode 8 called, “Chapter Eighty-Four: Lock & Key,” and we have your Riverdale recap below. In tonight’s Riverdale season 5 episode 8 as per the CW synopsis, “A big announcement forces everyone to take stock of their current lives; Cheryl sets a risky plan in motion after learning some surprising news about Toni; Jughead tries to make sense of a strange encounter he had.”

In tonight’s Riverdale episode, Kevin stops for a quickie with a guy before heading home to Toni and his boyfriend, Fangs. Archie shows Betty what he looks like in his fireman suit. She was not ready to see that. Jug is at the diner. He meets with an expert about his close encounter. She thinks he might be repressing something. That is not what he was looking to hear. He refuses her help.

In the morning, the sheriff calls Betty and Alice. He has found another body. Betty heads out to ID the body. Kevin and Fangs talk. Before Kevin can say what he wants to, Fangs tells him he wants to be monogamous. Betty calls to Alice the body isn’t Polly.

Ronnie talks to Archie in the teacher’s lounge to ask him about her plans for her apartment renovations. Jug comes in followed by Betty. They give an awkward hello. Soon Cheryl is there as well as Toni, Fangs, and Kevin, who announce they are engaged. Toni explains that all three of them are going to raise the baby. Cheryl looks angry, asking “what the hell?”

Later, Cheryl and Toni talk. Toni explains that she learned she had medical condition years back and the sooner she tried for a baby the better. Cheryl feels left out now that she has an instant family. She gets up to leave as Toni explains she still cares for her. Meanwhile, Betty and Kevin talk. She admits she has been hooking up with Archie.

Jug is lecturing to his class when he sees an alien. He wonders if he is all right. Afraid, he calls the expert after to join her repression group.

Cheryl vents to the model she is painting. She is upset about Toni. She gets to thinking, chaos is what she needs.

Katy Keene calls Ronnie to tell her all about how she saw Chad in the city. Ronnie heads to see Archie and the crew working on her apartment. They all head to Toni’s for a drink. Cheryl shows up to apologize to Toni. She also makes an announcement.

She is throwing a party, a key party. Everyone looks confused and surprised. Later that night, Betty has a nightmare about the serial killer she was preventing hunting. She calls Archie. He comes over. She doesn’t want to talk she just wants to forget things.

In the morning, Archie tells Jackson he spent the night with Betty and it was different. Kevin and Fangs are working out when Kevin suggests they bring some of their male friends to the key party. They can both have one last celebration before they marry. Fangs doesn’t like this idea.

Betty arrives home to see her mom excited and frantic. Polly called. Betty thinks it was a crank. At the repression group, Jug freaks out after hearing someone else’s experience and runs out. Tabitha chases after him. He tells her how he blacked out in NY. He was drinking and did a lot of drugs. Tabitha suggests they skip Cheryl’s party. Jug wants to go. He wants to forget everything.

Archie and Ronnie plaster together. She tells him how she feels like she is missing a lot of things in her life, especially since Fangs and Kevin’s announcement. She senses Archie feels the same. He agrees. She shares that Chad is coming to the key party.

Everyone arrives at the key party. Fangs unknowingly bring the guy Kevin has been secretary hooking up with. Chad makes a comment to Archie about the hot females. Archie walks away shaking his head. Cheryl stands up to get down to the rules. It all has to be consensus and yes, it’s a free pass. Ronnie goes first. She gets Archie’s keys. Chad is angry and tells her no. She tells him he can’t stop her.

After some back and forth, Ronnie and Chad leave. Jug gets Tabitha’s keys next. They leave. Reggie picks Fangs. Reggie kisses him on the lips. Fangs look unsure. Kevin picks the keys of Fangs’ date. Archie and Betty end up together and Toni and Cheryl. Toni isn’t surprised.

Toni tells Cheryl she is a manipulator. Cheryl has a surprise. She shows Toni a nursery she put together for them. This can be their sanctuary. Toni doesn’t want any to do with this house of horrors. She wanted them to be normal friends. She leaves. Cheryls just stands there.

Kevin and Rick, Fang’s date, talk. He thinks Fangs is great and he will be a good dad. Tabitha helps Jug into his house he is so drunk. They talk a little about what he is trying to avoid. He obvi has trauma, she tells him. He needs to deal with it.

Kevin leaves Rick to go home. Fangs is there. Reggie is 100% straight. Kevin tells Fangs he isn’t ready for marriage. Fangs is angry. Kevin pushed for all of this.

Archie admits to Betty that he still has some feelings for Ronnie. She seems to understand. They are so different and with all the darkness coming her way she needs him as a friend. Meanwhile, Ronnie has to tell Chad what she really thinks.

In the bathroom, Jug is frantic and scared but nothing is there. Cheryl’s model tells her she is beautiful. They kiss. She thinks Cheryl is beautiful. Meanwhile, Ronnie visits Archie. She tells him she is getting a divorce. Chad is gone. He wants her to be happy. She thinks he can help her with that. He needs to tell her something. He tells her about Betty. But they are just friends. She is all right with that. They kiss.

Polly calls Betty and Alice. She is on a payphone. They rush there. When they arrive the phone booth is bloody and smashed up. Polly is gone.