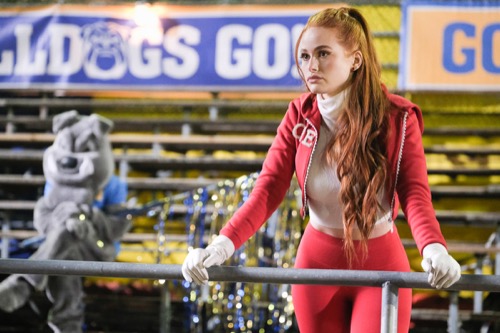 Tonight on CW their drama Riverdale airs with an all-new Wednesday, March 17, 2021, season 5 episode 9 called, “Chapter Eighty-Five: Destroyer,” and we have your Riverdale recap below. In tonight’s Riverdale season 5 episode 9 as per the CW synopsis, “After the Bulldogs lose several games, Archie and Veronica come up with a plan to boost school spirit; Jughead turns his attention to a student who he thinks needs his help; Betty seeks guidance from Cheryl after being faced with a tough decision.”

In tonight’s episode of Riverdale, Alice has been drinking. She thinks Polly is dead. Betty is waiting to hear from the FBI. Meanwhile, Archie and his team have lost again. Ronnie visits the team in the locker room. She needs to see someone score and she will pay $10k. After the team leaves, Ronnie and Archie try to come up with a game plan to help the team. They kiss.

Jug calls his editor to pitch a story about aliens while Ronnie tries to plan a pancake breakfast. Cheryl threatens to take her Vixens away from the game if the Bulldogs can’t do better. Betty gets a call from Glenn that it appears to be Polly’s blood. Jug’s student passes in a drawing with a story of something that looks a lot like a moth man. He talks to the principal about it.

At Pop’s, Archie sits with a student and his mom to ask him if he wants to be captain. The mom wants to know what the team will do for her son. Reggie arrives. He tells Archie the rest of the league wants the Bulldogs to withdraw. Archie isn’t backing down.

Kevin is packing with his dad. He plans to move home. He did want to know what changed. Ronnie visits her dad and makes a wager to save the Bulldogs. Jug talks to the student who drew a moth man. The student doesn’t really want to talk.

Betty visits Cheryl. She wants to know how she felt when she learned the truth about her brother’s death. Meanwhile, one of the star player’s on the Bulldogs transfers. Betty arrives home and lies to her mother about the blood, telling her it wasn’t a match to Polly’s. The next morning, Alice is back to herself.

Jug is called down to the principal’s office. The parents of the student who wrote the moth men paper no longer want Jug teaching their son. Kevin is called to Cheryl’s to meet her and Fang. They talk about their relationship. Kevin gets upset Cheryl is butting in.

At Pop’s, Betty picks up a tray of food for her mom. She talks to Jug about what is going on with Polly and her mom. He offers to help her with her investigation. Back at the school, Ronnie brings a pro football player to talk to the team. She also manages to get more players. This gets back to her dad. It causes a tiff between him and Reggie.

Betty gets mad when she and Jug talk to a man by the river who offers her nothing useful in finding Polly. She goes home and gets her gun. Meanwhile, Kevin makes a pass at a new guy he has never seen in the sauna. The guy gets angry and attacks him.

Betty sits and waits at a local truck stop. She sees a young girl go into a cab. She pulls her out and threatens the trucker, warning him not to come back again. Kevin admits to his dad he has been having trouble because he thinks he is ashamed of himself. He recalls his mom making him feel bad. He admits everything about his cruising.

The principal calls Jug. His former student has runaway. Out in the woods, Betty tortures a trucker she previously questioned about Polly. Jug calls her about his student. She is forced to leave and help him. She leaves the trucker tied to the tree.

Jug and Betty learn his student once took off and was missing for a week, wandering the lonely highway. They think it has to be connected to the other missing girls and Polly.

Archie’s team takes the field, hoping to win against an opposing team, Stonewall, backed by Hiram. After a hard start, the Bulldogs take the win. Hiram is angry, snapping his clipboard in half.

Back at school, Jug learns his student has left town with his parents. Betty arrives home to find Glenn. He has told her mom the truth about Polly.