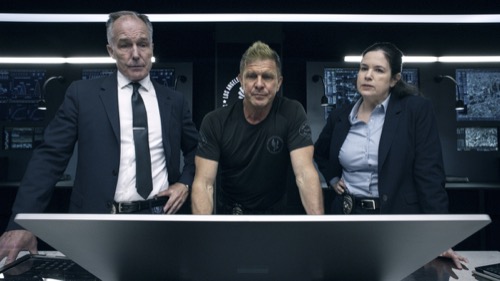 Tonight on CBS their new show S.W.A.T. inspired by the television series and feature film airs with an all-new Wednesday, May 26, 2021, episode, and we have your S.W.A.T. recap below. On tonight’s S.W.A.T. season 4 episode 18 called “Veritas Vincint,” as per the CBS synopsis, “The bombing of a police station puts Los Angeles on edge, leading the team to a final showdown with the Imperial Dukes.

Hondo faces the fallout from a bold decision that threatens his future; Tan takes a big step in his personal life.”

In tonight’s S.W.A.T. Finale episode, Hondo torched his career. He went public about the racist cops. He named names and he also revealed how flawed internal investigations were because those things were supposed to handle everything. They were supposed to rule out the bad cops from the good cops. Otherwise, what’s the purpose for them if they can’t do a simple job like that. Hondo started something by talking to the press.

He revealed the deep issues that the good cops are struggling with and he stirred up trouble while he was at it. There was a new group in town that was swearing they’ll protect their own. They didn’t want cop involvement and they were threatening reprisals if the cops do come around. Hondo saw it in the news.

Hondo’s boss Hicks also showed it to him. Hicks and his bosses believed these new extremist groups are only going to get worse and they were proven right. Someone released a bomb inside of LAPD’s front office. The person who dropped off the bomb was wearing a signature coat that identified him as Kevin Hillard. Hillard was one of the extremists pushing the anti-police agenda.

Not even the racists cops getting fired was enough to calm down Hillard. The racist cops that Hondo spoke about to the press had all been fired and the police were willing to admit they were wrong for keeping those men on the payroll for as long as they did. But this wasn’t enough for Hillard. Hillard was now bombing police stations and so he was arrested.

Hillard’s arrest was very public. He informed everyone that he was being arrested and a video of the arrest went viral. People were going to come out to protest it and some of those people will be gangbangers who’ve made an alliance with Hillard. Hillard’s arrest stirred the pot. The team did their best to work the case like they normally do and there was just one problem. Hillard wasn’t their guy.

He would never be dumb enough to work signature jacket to a bombing and a bombing wasn’t the kind of change he wants to be a part of. Hillard said the men that were following him could be his alibi. Only the LAPD didn’t have anyone following Hillard. It had to be someone else and so the team went back into the field. They looked for leads and they found a Hillard impersonator.

The impersonator looked like Hillard. He wore the same jacket and he drove the same car, but the impersonator had been killed once his usefulness was over and it was clear the bombers aren’t stopping. The team had found their bomb den. They found a list of targets and the targets were police. Who could be after the police?

It’s what they’ve wanted from the beginning and the current climate has provided the best time for that. Hondo and his team were going to stop things from their end. Leroy was also helping out. He spoke with his fellow gangbangers. He got them to back down and that helped ease things for a while. It was still tense out on the street. The cops were being targeted. Someone bombed one of their cars. And lesser cop would have used that to justify going after the protestors.

Except for this time the protestors, as well as cops, had been warned. Hondo and his team issued a warning about the Imperial Dukes. They asked people to stay calm no matter what and not to give in to violence and it seemed to be working. It was working up until the LAPD car exploded.

Everyone chose to run away after that and too civilians meant the cops couldn’t keep shooting at the Imperial Dukes. One got away on a motorcycle. Street went after him on a borrowed motorcycle. Street caught up to the bad guy. He kept the bad guy busy while Hondo came up in front of him and knocked him off his bike. The team took down the Imperial Dukes. It seemed only fitting that it happened before Erika’s farewell ceremony.

Later, the team arranged for Tan to meet his fiancé and he was finally getting married after months of delays.

Street and Chris also discussed their relationship and, while they don’t have a solution, for now, they’ve both said they can work it out and they finally kissed. Their last kiss didn’t count because they were both drunk at the time. This kiss counts because they were telling each other they love you.

As for Hondo, he was being demoted. The inner police powers that be wants to force him to quit and so forcing him to take a promotion is how they do that.