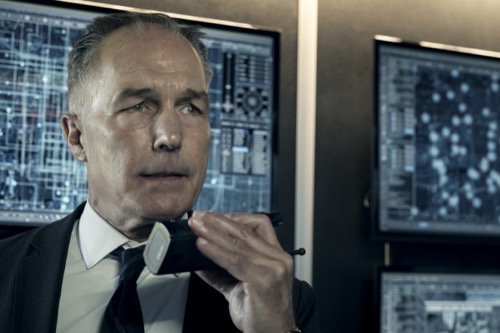 Tonight on CBS their new show S.W.A.T. inspired by the television series and feature film airs with an all-new Wednesday, January 27, 2021, episode, and we have your S.W.A.T. recap below. On tonight’s S.W.A.T. season 4 episode 8 called “Crusade,” as per the CBS synopsis, “SWAT searches for a group of extremists carrying out coordinated attacks against local businesses. Also, Deacon and his wife, Annie, find themselves at odds when Annie wants to enroll their daughter, Lila, in private school.”

A man tried to make a run for it. He was like the road runner in how he managed to evade capture and so it had taken a special team to get him. It had taken Hondo’s team. Hondo and his team chased this guy through a maze basically and they arrested him. This had happened towards the end of their shift, but no sooner were they done in arresting this guy that they called to another scene. Hondo decided to take this call. He ordered his team to move out and they were there to rescue a business owner after someone shot him as well as set his business on fire. It turns out the two cases were connected. Their first guy was identified as Christopher May and May was a part of a coordinated effort to commit hate crimes.

May was committing these crimes with other men. They would all wear an American flag as a bandana around the lower half of their face and they would target business owned by people of color. They would rob these places. Then they would torch these places. They also tended to have tattoos of an iron cross like the Nazis used to have. The group that was doing this were modern day Nazis. They thought the white race was being slowly replaced and that it was their duty to stop this by robbing a few places. It went on like this for a while before someone decided to carry out a mass shooting. It was prevented and the person was killed, but this group that was calling themselves the Imperial Dukes were escalating and they were doing it in LA.

The team’s friend in the FBI had information on this group. Special Agent Jennifer Carr told Hondo and Hicks that the leader of the Imperial Dukes was anonymous. He tends to write stuff to instigate other into doing things, but he doesn’t seem to have done it himself. There was also a manifesto for the group. Their manifesto called for a crusade and this crusade is the elimination of everyone who wasn’t a white Christian. Carr warned the team that more mass shootings might be planned. She thinks the group is volatile and she cautioned the team to take precautions with them. Only Hondo questioned how many times they’ll have to do something with groups like this. He likes to believe the world is getting better and then something like this happens.

The mass shooting that almost happened had been at a beauty salon. Hondo knew the owner because he grew up in that neighborhood and so he later talked to the woman. She wasn’t upset. She hadn’t been harmed and she knew she could fix her salon so that it was good as new. She told Hondo that her father was a pastor in Tennessee. His church was burnt to the ground three times and each time he build it back up. If he could do that, then she could fix her salon. Hondo again wondered when things would change. He later put what happened behind him and he went looking for May’s friends. May wouldn’t give them up. He refused to talk about his group and so they had to find them by searching for the tattoo.

May got his tattoo in prison. It was done by Jedd Barstow and he currently owns and operates a tattoo parlor. The team went to the building. They were spotted by Barstow who tried to run and so they arrested him, but he too wasn’t talking and thankfully the team found other evidence. They found the command center for the Imperial Dukes hidden in red room inside of the tattoo parlor. There was literature and evidence that led to even more of Barstow’s friends. They also found out about Julian Matthews. Matthews was former military and he was kicked out after brutally hazing a soldier of color. The team figured he would be behind the tactical nature behind the Imperial Dukes. They went to arrest him and they didn’t find him at home.

It was as they were there that they were alerted that Matthews was live-streaming. He was threatening to shoot up a Jewish Center and so the team track down his location using his feed. They later found him inside of the building shooting it up. He didn’t get the chance to hurt anyone and they were able to bring him in alive. It just didn’t change to the damage this group did. Street got the idea to help the businesses out by giving them an actual helping hand and he was able to convince the others to join in as well. Street, Chris, Tan, and Erika all help board up windows. Take stock of damage. They were doing a good job too when they got the call to come back into work and so they shelves their conversations.

They had been talking about Erika’s dating life. She met a guy at a well-known badge bunny hang out and so the guys were telling Erika that the new man in her could have pursued her because he wanted to date a cop. Only they weren’t saying negatively. They were just messing with her and they ultimately convinced her to take a chance on the guy because Tan was marrying his own badge bunny. Erika went with them in responding to this new call because she was filling for Deacon. Deacon was off trying to get his daughter into a private school because her therapist thought it would be a good change for her and so Erika was filling him during his time off. And that’s a decision they both ended up regretting.

The team took down another Imperial Duke. They killed him at his home and unfortunately he had returned fire before he died. He shot Tan who walked away with a scratch. But he shot and killed Erika. Erika died before she could celebrate moving in with Chris and she was Chris’s best friend. Chris did everything to try and save her yet nothing worked. Erika died and now the team has to bury her.