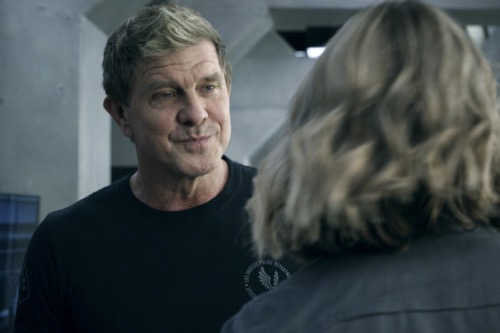 Tonight on CBS their new show S.W.A.T. inspired by the television series and feature film airs with an all-new Wednesday, April 21, 2021, episode, and we have your S.W.A.T. recap below. On tonight’s S.W.A.T. season 4 episode 14 called “Reckoning,” as per the CBS synopsis, “As the team works to stop a violent attack on the city, they’re forced to confront the group responsible for the death of team member, Erika Rogers.

Also, Hondo and Leroy disagree on how to handle a challenge to Darryl’s fledgling business, and Luca tries to recruit new TEMS officer Nora Fowler for an annual inter-squad competition.”

In tonight’s episode of SWAT, Hondo let his friend and his godson the money they needed to open their own auto repair shop. The three of them found a good neighborhood and they got a building on the cheap. However, there’s a new crew in the neighborhood. It’s being run by someone named Alex and Alex was running an extortion racket. He would visit the local businesses in the area.

He would tell how unsafe it was right now and that he could help them keep their businesses safe in return for a fee. It was therefore an extortion racket. It was illegal and it was unsafe. Hondo considered finding a new place to rent and both Darryl and Leroy shot that idea down. They liked their current area. They’ve been working to put everything and so they didn’t want to leave. And this Alex was pestering more people than just them.

Hondo spoke to a local businessman. He told him that he’d do something about it as a member of the LAPD and Hondo tends to stand by his word. He would have begun working on this new gang, but his work as a SWAT officer took precedent and they caught a lead on the Imperial Dukes. The Imperial Dukes were the white nationalist group that killed Erika. Catching these guys was personal for SWAT and they finally got a lead with Tabitha Lewis.

She was married to Jared Lewis who is a recruiter for the Imperial Dukes and he’s a wife-beater. He beat up Tabitha so bad she landed in the hospital. Tabitha no longer wants to protect her husband and so she reported it. She was visited at the hospital by Luca and Tan.

Tan and Luca stayed near Tabitha as she revealed everything she knew. Tan was waiting outside when he spotted Kyle Fally and detained him. Fally was a member of the Imperial Dukes. He had been at the hospital because he was supposed to keep an eye on Tabitha and so he’s already failed in his mission. He was still detained when the team found the location of the white nationalists’ hideout.

SWAT moved on the location. They hit the building and arrested anyone who tried to fight back or was hiding inside. Only they also found something at the site. Nora was riding with them today. Nora saw the tank and she alerted Hondo. Her tank was that of toxic gas. It kills within minutes and the tank in the warehouse was empty.

This cell of the Imperial Dukes had gotten away with their weapon. It was clear the white nationalists wanted to use the gas to kill people, but how are they going to deliver it? They couldn’t just walk around with it and so the team knew they had a method of deliverance. SWAT questioned the people they had in custody. They asked them about the gas and all they got back was that a great war was coming.

The Imperial Dukes got their hands on the gas by stealing from a company. The company thought their missing supply was a computer error and so SWAT had to inform them differently. Hondo took some time off from the team to speak with this wannabe gangster Alex. He told Alex that he knows what he’s doing and he’ll be keeping a close on him, but Alex wasn’t scared of him because he knew Hondo didn’t have anything he could arrest Alex with and so Alex was feeling confident while Hondo was ordering for extra patrol in the area. A heavy police presence isn’t something Leroy wants. He just got out of prison and the life. And so he wasn’t seeking a chance to get embroiled in a potential turf war.

SWAT also had its own issues. The new guy Durham had offered Deacon a book to read and he said the book helped “walk with dignity”. Deacon read the first few paragraphs to be polite, but he soon found it was a white nationalists’ manifesto and what Durham said came from a white nationalist quote. He didn’t say the whole quote but Deacon became weary. He told Hondo his suspicions. Hondo told him to get a credible proof before he accuses a fellow officer of being a racist and so Deacon was seeking evidence as he talked to Durham. Except for Durham later told him that what the Imperial Dukes are doing is wrong. The Imperial Dukes posted about a fake attack on a fast food joint and they pretended this building was being targeted by rioters with Molotov cocktails.

White nationalists stormed the place with the intention of protecting the building when really they were the distraction. The Imperial Dukes was trying to keep SWAT distracted with word of a fake riot and all along they were really targeting a keynote speech. SWAT found out about it and they had Nora go with them when they stopped the chemical attack. Which they did. The only people that breathed in the gas were one of the Imperial Dukes. The team stopped if not killed the dukes and people were saved. This helped Chris. She was feeling depressed with thinking about Erika and so she was glad to put some of the cell’s members down. But the team missed their chance at getting the leader. The leader wrote on their message boards that the work wasn’t over.

Deacon was later invited to drinks at Durham’s house. Durham repeated the first line of the white nationalists’ quote and Dean repeated the rest and so that’s when Durham welcomed him to his white nationalist group. It turns out Durham was a racist cop. A racist cop who thought he should pity Deacon for having to work under Hondo, a black man who got promoted over him.

As for Hondo, the police never did get anything on the gang. Leroy chased the gang out of their neighborhood by mentioning he was a bigger gangbanger than they were and so that was fine as a short solution. Only what about the people Alex will try to extort next. Those people will pay and no one will call the cops. And so Alex is still getting away with it.

And Nora agreed to join Hondo’s team as a runner in exchange for Luca training her for SWAT.