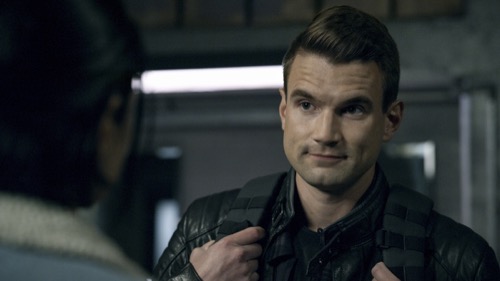 Tonight on CBS their new show S.W.A.T. inspired by the television series and feature film airs with an all-new Wednesday, May 19, 2021, episode, and we have your S.W.A.T. recap below. On tonight’s S.W.A.T. season 4 episode 17 called “Whistleblower,” as per the CBS synopsis, “The team races to rescue victims of a sex trafficking ring that is preying on disenfranchised women; Hondo finds himself at odds with Leroy and Darryl over the future of their business; Street confronts Chris about meeting with his hospitalized mom.”

In tonight’s S.W.A.T. episode, the police union was powerful. They tend to step in whenever an officer is in trouble and they did so again with Durham and the other two. The racist cops weren’t being fired. They were instead going to be transferred to different precincts and so Deacon faced more repercussions than the racists. The racists got to pretend they weren’t racists because they used the black friend’s defense.

They mentioned how they worked with black cops and that there was never an issue in the past. Hondo knew that was a joke. He and Deacon both found evidence that three racists’ arrest reports skew heavily towards people of color. They went around looking for minorities to arrest and so that should have been proof of their racisms yet it wasn’t. The three men will be transferred and the other officers will give Deacon a wide berth because now he’s known for investigating other cops.

Holt broke the news to Deacon and Hondo. Neither of the men was happy with the situation and Hondo personally feels like the department should have done more. The least they could do was take back the racists’ badges and guns. But the police department wasn’t going to do that. They were just going to transfer the men and hope everything blows over. The guys in the meantime had to do their jobs.

They responded to a shootout out by the gas station and there the team came across several bodies. It seems a shootout occurred between a couple of pimps and a john. The john was named Gabriel Cardenas. He was with Long Haul Protectors which is an organization that tries to help the girls that are being human trafficked to truckers.

They were more of them than the police. The Long Haul Protectors got together and they’ve been quietly rescuing girls for a while now, but things didn’t go like planned this time. The girl ran away rather than be rescued and her pimps started firing at the guy who was trying to save her. Cardenas had a gun on him as well. He fired back and he killed one of the pimps. Only the other one got away with two of the girls.

The other girl whose name is Shannon was accidentally left behind. She had been hiding in the bathroom during the shootout and so her “friends” left without her and that wasn’t good. Shannon later explained to Detective Lynch that the other girls will be punished now for losing her. And Shannon had plenty of more to say about the pimps that have been moving her for months now.

Shannon fell prey to a “Romeo pimp”. He’s the kind that pretends to date a girl and to prove she loves him she has to prostitute herself. Shannon has been missing for a while now. Her family and friends don’t know where she is. Once she started to prostitute herself, she’s been dragged all over the country and she didn’t even know she was in AL until she saw LAPD on the SWAT team that rescued her.

Shannon only started to talk when she realized what she actually lived through. She’s a victim of sex trafficking and she was safe now. Apart from her wanted to run off back to what she knew but slowly the team was helping her see the light. They even got her to reveal the man who got her involved in all of this. His name was JC and the team spoke with him. And it turns out he didn’t recruit her.

JC was just one of the johns she was forced to have sex with. Shannon said his name because she still needed to be deprogrammed and because she hates JC. JC was cruel. He was rough. He didn’t care that she was being forced to sleep with him and so he will be punished but the team needed some answers from Shannon. They went back to her. They asked her about the pimps. She told them about Paul, Barry, and one other guy.

This other guy never revealed his name. He was just scary or at least that’s how Shannon described him and Shannon also described the house where they were being held. She saw she saw a birdhouse that didn’t look like a birdhouse. It was actually a siren leftover from the Cold War. The team used that information to track down the house was being held and they later moved on the building.

Unfortunately, the team only found one girl and one guy. The third pimp had made off with a couple of the girls and there’s was no telling where he went. The team was able to identify by cameras in the house they just raided. They knew they were looking for a felon accused of murdering two women he was pimping out and so this guy was known to throw away girls if they displease him. The team was able to track his location.

He was at another rest stop with the girls and he ran off the moment he saw the police coming his way. The perp stole a truck from one of the long haulers and he had a prisoner. He had one of the girls in the vehicle with him and the police were giving chase. They chased out onto the freeway. They forced their perp off the road by messing with his tires. And just when he was going to shoot his victim, Hondo shot the perp instead.

The team saved the day. They rescued all of the girls that were being trafficked and the girls now have a long road ahead of them. After Hondo’s team had saved the day, Hondo went by Leroy and Darryl’s repair shop. The two had tried buying out Hondo’s share and yet he knows that they didn’t come by that five thousand naturally. Hondo asked Leroy about it when Darryl wasn’t around. He asked Leroy where the money came from and Leroy admitted he gave up his place.

He’s now sleeping at the shop but he believes the shop will be better if Hondo stops coming around while he’s wearing a badge. Hondo saw how much Leroy wanted the shop to work out for Darryl. Hondo agreed to step back so that the father and son can bond. And so that Hondo could regain his old friendship with Leroy.

Hondo finally realized he was wrong about many things. He went to a journalist friend and he revealed to the friends’ names and places and things that were said that can prove three LAPD officers were racists. The friend was going to print an article. Hondo will be named as a source and so he warned Hicks about it. And Hicks was not happy.

And neither was Chris when she found out Street was going to give his mother a part of his liver.