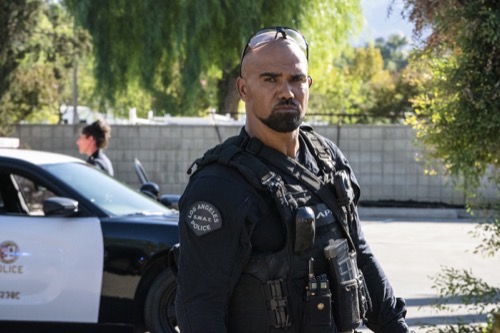 Tonight on CBS their new show S.W.A.T. inspired by the television series and feature film airs with an all-new Wednesday, January 13, 2021, episode, and we have your S.W.A.T. recap below. On tonight’s S.W.A.T. season 4 episode 7 called “Under Fire,” as per the CBS synopsis, “The SWAT team goes on the hunt for a sniper who is targeting the Los Angeles Fire Department by setting fires around the city to lure in unsuspecting engine companies.

Also, the rivalry between Chris, Street, and Tan ratchet up when Tan finds out there’s an internal betting pool on which of them will win the SWAT leadership competition. And, Street and Molly’s relationship is strained by his complicated history with his imprisoned mother.”

Street received a call. He received a call from his mother Karen at the prison. She claims she’s sick and she was reaching out to him because she thought her condition would take a turn for the worst. Karen has been calling Street a lot. Street tends not to answer his phone when he knows its her and today was different because it had been Molly that answered his phone.

Molly answered it because she thought it could be serious. She talked to Karen and Karen explained that she was ill. Molly later handed the phone to Street when he came back because she thought he would want to speak to his mother as well, but he hung up the phone without speaking to his mom, and that shocked Molly. Molly lost her own mother years ago.

Molly didn’t want Street to experience the same thing. She told Street that Karen’s condition must be bad if she’s calling and Street claimed it was just a ploy. He was used to Karen. She always had a scheme and Street usually fell for it, but not today. Street didn’t care what his mom had to say. He didn’t care that she was claiming to be ill. He just wanted her out of his life and Molly couldn’t get that. She got angry with Street for ignoring his mother. She stormed out of the apartment and there was nothing Street could do about it because he had to go to work. Street would talk about these things with Chris. Only things have been odd with Chris since they were both competing for the liaison position and so Street just outright ignored what happened.

Street chose to focus on work. He and his team were called out after some firefighters called for enforcements after a sharpshooter started taking shots at them. The firefighters mostly got away unharmed, but one guy took a shot to the chest and he hadn’t been able to take cover. He was out in the open when SWAT arrived. Deacon went to the injured firefighter while the rest of his team went looking for a sniper.

They found the roof he used and they didn’t find the shooter. He made his escape through the back. He probably left the moment SWAT arrived and so they lost their chance at stopping him right then and there. And so the team kept looking for him because odds are he’ll do it again.

The attack on the firefighters was well planned. The team investigated every car that was near the scene and they found someone that stood out. The guy they found was a real weirdo. He was obsessed with becoming a firefighter and he flunked out at the Academy a good three times already. Only that doesn’t seem to have fazed him. He still wants to be a firefighter and he was found at home with no weapons.

His house, though, was a shrine to firefighters. There were even pictures of the station that was attacked and so their weirdo filled them in on the history. He said Station 127 dealt with a deadly fire two years today that killed five people. This seemed to be too big of a coincidence to the team and that’s how they came to suspect Station 127 was the target.

The rest of LAFD were in the clear. It was just Station 127 that had a target on their backs and unfortunately they answered another call. This call came from a burner cell like the first fire. SWAT showed up to check out the scene. They found the sharp shooter and once again he got away, but this time the fire he set had victims. He set an abandoned building on fire because he wanted to lure firefighters to it and instead there were squatters. The firefighters saved the squatters and SWAT at least got a look at their guy. They later identified him as Adam Max. Max lost his family in the fire two years ago. He didn’t blame the landlord or the person who owned the building. He blamed the firemen and he sued them. He lost his case against them. He exhausted his appeals and that still wasn’t enough for him. He blamed them for his wife and daughter’s death.

Max had been work when the fire happened. He came home to see the firefighters retreating with his family still inside and he developed an irrational hatred of Station 127 because of it. It was this hatred that was driving him to picking them off. He tried counseling and it didn’t work for him because he didn’t want it to work. He just wanted to be angry. He couldn’t get at 127 anymore because they were pulled back and so he called the police station because he knew LAFD Captain Hauser would be there. Max spoke with Hauser. He called him a coward for hiding and he threatened to make it an open season on all of LAFD if 127 didn’t come out of hiding. And so Hicks tried to talk to him, but Max hung up.

Max said all he was ready to say. He was going to kill a bunch of innocent firefighters if he couldn’t kill 127 and there was nothing 127 could do about it. It was now in the hands of SWAT. SWAT later heard that Max had used a firebomb to injure a couple of firefighters. He changed his MO. He was going after other firefighters and Hauser heard about it. Hauser went to go meet with Max. He was hoping to save lives by speaking with Max and Max didn’t want to be reasoned. Luckily for everyone, SWAT realized what Hauser did. They followed his cell phone and, while that led them down the wrong end, Hauser was smart enough to send out a beacon when Max forced him back to his own station house.

Max wanted to set Hauser as well as the station house on fire. He wanted Hauser to die like his family died and he wanted him to die at the station house because he still wanted to punish 127 for what happened to his family. Max still blamed in spite of everything. In spite of the evidence and several juries disagreeing with him. Max was so set on his plan that he set a fire with him still inside because he was prepared to die with Hauser just to get revenge and with all the smoke – SWAT couldn’t see inside. Tan took a risky move in order to get a better position and he therefore saw the moment Max tried to make a run for it. He was able to warn his team and together they took down Max.

The firefighters showed up. They were the ones who truly rescued Hauser and so no lives were lost, but Tan realized he took a risky move because he found out no one thought he would win the TLI position and that they weren’t even taking bets on him. So, he did apologize for what he did to Hondo. He also explained why he did it and Hondo got where he was coming from. He just warned Tan not to do it again.

Later, Street talked to Chris. She told him that he was being hard on Molly and so Street soon apologized to Molly for how he was acting with her. He doesn’t mean to push her away. He wants to talk about his mother with her but she also has to accept that he doesn’t want a relationship with his mother and it doesn’t matter if his mother is sick or not. He just doesn’t want anything to do with her. Not after everything she did to him.

And that firefighter that was shot, he made a full recovery and he thanked Deacon for saving his life.