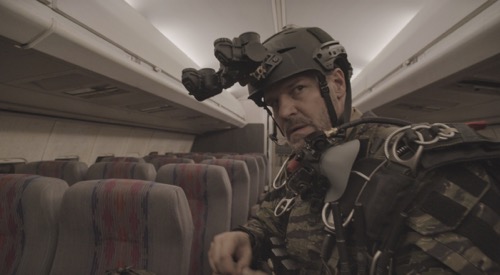 Tonight on CBS their new military drama Seal Team airs with an all-new Wednesday, October 10, 2021, episode and we have your Seal Team recap below. On tonight’s Seal Team season 5 episode 1, called “Trust, But Verify: Part 1,” as per the CBS synopsis, “Everyone on the team is shocked when they learn a training exercise is really cover for a covert mission to get a weapons expert out of one of the most dangerous countries in the world.”

So make sure to come back to this spot between 9 PM and 10 PM ET for our Seal Team recap. While you wait for our recap make sure to check out all our television news, spoilers, photos, recaps, and more, right here!

In tonight’s Seal Team premiere the episode begins with Bravo jumping out of a plane in enemy airspace.

48hours earlier, Ray is sitting on the couch, headphones on for a therapy session. His wife walks in and tells him that it is nice to have him home. She is holding a housewarming party and wants him to go to the grocery store with him to buy some things. Sonny is with his daughter, he spends some time with her and then heads back to base.

Jason goes to see Ray, he asks him about his therapy and then tells him that he is always there for him. Ray sits down with Clay who asks him about his language training. Ray says he is just adding tools to his tool kit. Naima introduces Jason to her friend Eva, hoping they will hit it off. Jason gets a call, he shouts out to the boys that the party is over.

They head to base and find out that Bravo is heading to South Korea for exercises with the ROA Special Forces. Jason says he doesn’t know how much they can show ROK without a full squad. Petty Officer Quinn and Lieutenant Davis will be on the bird when they depart the next day. Ray asks Jason if he wants him to roll on this one and stand down, Jason tells him to roll with them, all Bravo needs to see is him out of their training, he doesn’t want anyone to get wind of Ray’s PTSD.

Sonny goes back to see his daughter and says goodbye before shipping back out. Jason’s kids like Eva, says you don’t just meet someone at a party and start a relationship, but maybe he will call her when he gets back.

Clay is packing up, he says his goodbye to Stella before heading out.

In the bird, Quinn and Davis walk in and Quinn tells Jason that this is not a training op and he is sorry for the misdirect, this roll outcome from way above him. They will receive more information when they land at the base. Jason asks what is up with the cloak and dagger here. Quinn says Bravo will be conducting an operation inside of North Korea.

Bravo is welcomed to South Korea and told that if this mission is not executed to perfection consequences can be catastrophic. They are shown a photo of Jin Yong, better known as the godfather of the North Korean weapons program. Eighteen months ago his wife defected, she is their source. He is overseeing a weapons program under the careful watch of the military and secret police.

Bravo won’t be getting him out. Jon-Wi Kwan, who runs an underground railroad network will be getting him out. She has been on the ground for weeks. They will get Jin out by crossing an electrified river. Bravo will shut the power down before Jon and Jin hit the water. Zero footprints and zero kills. Bravo needs to tell them the best way inside.

Bravo has a lot to talk about, Ray says getting into North Korea is like getting into Fort Knox. Jason says they need to book a flight to Vladivostok, Russia. The team heads into a plane, it is more comfortable than a cargo plane and Ray says it is about time Bravo got the five-star treatment. Jason and Sonny are sitting together, Jason asks him if everything is ok back home, Sonny says he only has Bravo on his mind. Sonny says Ray was a liability on the last appointment, Jason says he would be there if he wasn’t ok. Sonny is worried that he may freeze up again. Before Sonny gets up to sit somewhere else, he tells Jason that his loyalty for Ray is crowing his judgment on what is best for Bravo.

Bravo is getting suited up, Clay says so much can go wrong on this jump, becoming shark food should be the least of their worries. One at a time Bravo jump, they are in enemy airspace. They land and bury some of the gear, then they meet up with Kwan. She brings them to a bunker and tells them they have a good view of Jin’s house. She tells him that he arrives every night after work, it is easier to get him from home. She tells them that her plan will work if they keep their end of the deal.

The mission to get Jin out begins, everything happens as Kwan said, Jin is taking his evening stroll and nobody seems to care. Bravo is looking for the electrical panel. Kwan said there were only three guards and there are six. Clay found the electrical panel while Jin is slowing down on his walk.

A vehicle is approaching Jin, and Kwan has been found out, she is apprehended and taken. Jason says if the North Korean’s know about Kwan, they might know about them. Jason tells them they don’t fire a shot unless they have to, they head out. All the team, except for Jason, crawl down into an underground shaft.