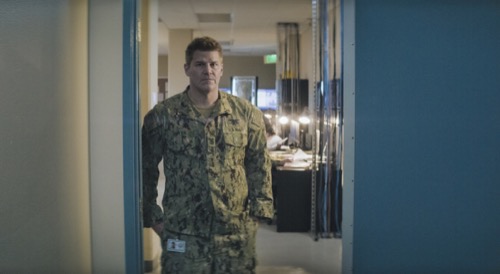 Tonight on CBS their new military drama Seal Team airs with an all-new Wednesday, February 17, 2021, episode and we have your Seal Team recap below. On tonight’s Seal Team season 4 episode 7, “All In” as per the CBS synopsis, “AAs Bravo continues grappling with major changes, the team spins up on a mission in Ecuador. Also, Natalie presents a life-changing idea to Jason.”

Bravo is running a drill while Jason is anxious. After, Ray sits through a dozen meetings about his hostage situation. Meanwhile, Sonny and Davis share a night alone in the woods by a fire. Sonny gets a call that Mike is drunk and needs to be picked up.

Clay meets with Stella as friends. Clay admits he and his girlfriend broke up. Stella admits she is seeing someone. Her focus is to evolve. He gets it.

Bravo meets up. Mike asks Sonny why Davis was with him the other night. Sonny lies, blaming a late night of work. The meeting starts. Things are changing. Blackburn has been bumped up the ranks. The team is happy for him but unsure about the new lieutenant, Soto. Jason tells Blackburn he will be missed. He isn’t as welcoming when the new commander Soto comes in.

Davis tells Sonny she is worried that Mike asked about them. Sonny tells her not to worry. She tells him they need to stop this all again. He tries to talk her down. She is called by Lindell. She is worried it is about Sonny, but instead she is commended for her work and has been asked to speak at a conference.

Bravo is called for a new mission. They need to go to Ecuador to collect deadly missiles. Sonny makes a few jokes. Soto tells him to focus. He also plans to accompany them to learn the team. They don’t look happy. On their way out, Jason sees the team. He wants to be with them.

Ray shows up at the range to find Jason shooting. They talk about all the changes of the team; Ray is out for now and Jason did for good. Ray’s wife expects Jason and Natalie to come for dinner. Jason tells him yes, he isn’t going anywhere.

On the way to their mission, Sonny steers clear of Soto. Soto tells Clay he needs to walk the line. He heard about how he went rogue. Meanwhile, Jason is struggling at the Ops Center. A man is wounded in the field and he can’t handle being there and not out in the field.

The next day, Jason calls out sick. Natalie asks him if maybe he needs a fresh start. They could move. She has accepted a job in San Diego.

The team lands and heads into their mission. At Ray’s, he and his wife welcome Natalie and Jason for dinner. Things get weird when Natalie asks Ray how he is. He says fine but his wife thinks differently and so does Jason. They also get into Jason possibly moving. Ray is surprised he would leave.

Outside alone, Jason asks Ray why he isn’t sleeping. Ray tells him he will be fine when he gets back in the sandbox. Jason thinks staying in the fight is the best thing for guys like them. They talk about Jason’s training. Either way, Ray wants to know what he is running from.

On the ground and in the dark, Bravo makes it over a ridge. They engage in gunfire with three men. They take down 2 men. Clay loses sight of the third who then jumps on his back. Clay takes him down and IDs him. They have their target. They head back to celebrate Blackburn.

The team gets together to give Blackburn a good send-off. Davis heads for the door after. Sonny runs to her. He wants to make this work. He will even leave the team. She smiles. She knows he is serious. She wants to finish their camping trip.

Jason and Clay talk about Soto and all of the big changes. Clay thinks maybe you aren’t regressing if you are doing something you love. Meanwhile, Ray is struggling. Clay knocks on Stella’s door. He tells her he loves her. He may have been running from that. Now he knows.

Jason arrives at Lindell’s office. He tells him he needs to be Bravo 1 again!