BY hellodrdavis on January 17, 2021 | Comments: Leave Comments
Related : General Hospital, Hot News, Soap Opera, Spoiler, Television, The Bold and the Beautiful, The Young and the Restless 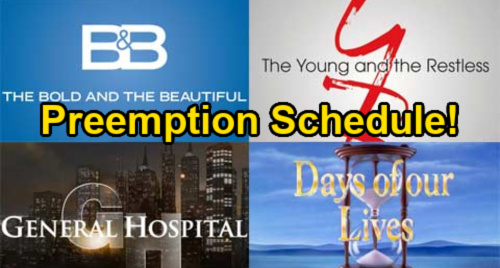 Soap Opera viewers may be wondering about how this week’s Presidential inauguration of Joe Biden on Wednesday, January 20, will affect the preemption schedules of General Hospital, The Bold and the Beautiful, The Young and the Restless, and Days of Our Lives.

As you may know, the inauguration will take place on Wednesday, January 20, and the three major networks, CBC, ABC, and NBC, are planning to offer wall-to-wall coverage of the historic event.

Previously, CBS and ABC had planned to air original episodes of The Bold and the Beautiful, The Young and the Restless, and General Hospital, respectively. But in recent days, CBS and ABC decided to join NBC, who made the decision long ago to preempt Days of Our Lives in lieu of the Presidential inauguration.

TV coverage of the inauguration festivities are set to begin in the early morning on Wednesday, January 20 on each of the major networks, with coverage extending throughout the afternoon. This means that most of the daytime TV lineup on each network will be preempted.

The three networks are also planning evening coverage of the events, with specials recapping the day and replaying highlights of earlier events.

But soap fans shouldn’t worry that they’re going to miss a thing – the episodes of General Hospital, The Bold and the Beautiful, and The Young and the Restless that were previously scheduled to air on Wednesday, January 20 will now air the following day, Thursday, January 21.

And if you’ve been following the scheduling for Days of Our Lives, then you know that NBC has planned to televise the inauguration for a while now, so no episodes of DOOL were previously scheduled on that day.

At any rate, soap viewers have the day off on Wednesday, January 20 to view the inauguration celebration, and the action will pick right back up on General Hospital, The Bold and the Beautiful, The Young and the Restless, and Days of Our Lives on Thursday, January 21.

Be sure to stick with CDL for all your soap news and spoilers. We’re here for you with all the latest updates on all your favorite soaps. Check out our daily episode recaps, too!