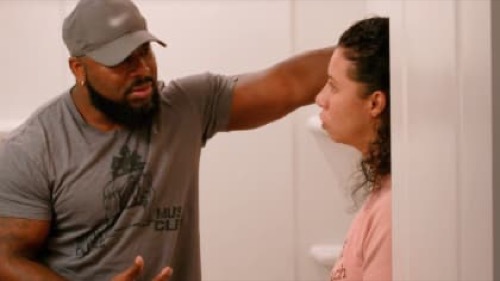 The plural lifestyle isn’t for everyone. Ashley and Dimitri thought they found the perfect sister wife in Vanessa and then Vanessa left them. She couldn’t handle being a sister’s wife. She wanted something traditional and so Ashley and Dimitri had to continue their search. They kept looking for the right match for their family and the Snowdens believe they’ve finally found her in Christeline. Christeline is from South Africa. She was the mother of two. She’s also never been to the United States before and so the Snowdens thought there might be a period of adjustment though Christeline surprised them with how she fits in. She hugged the couple. She was good with their kids and there was an instant attraction to Dimitri.

Christeline thought he was hot. She wasn’t going to be given an opportunity to act on these feelings because of the Snowden’s past with Vanessa and so there was going to be no intimacy on this trip. Maybe with future trips. On this trip however, Christeline has to settle for hugs and kisses. Ashely has spoken. Ashley felt one of the reasons it didn’t work out with Vanessa is because Dimitri jumped into things too fast and it goes without saying that she hadn’t liked it herself.

It’s hard for the first wife to adjust to the second wife. They always think they’re prepared and then the second wife comes along and it’s “oh, I’m feeling a certain type of way” or “I’m not ready for this”. It’s much is easier to add a third wife than it is a second wife.

The third wife joins the family once they figured out all the kinks. The second wife and her attachment to the husband tend to raise some jealousy issues. Take Danielle. Danielle and her husband Garrick are getting a divorce because he has to marry the Brazilian Roberta legally to bring her into the country. Roberta is to be Danielle’s sister-wife and Garrick’s second wife. Both Garrick and Danielle agreed to the divorce because they both wanted Roberta to join their family.

It just didn’t stop Danielle from questioning what might happen to her now. The marriage certificate was a very important document and now Danielle secretly fears that her husband can just leave her for Roberta and she would be left with nothing.

Danielle didn’t fight for anything in the divorce because she doesn’t see it as a true divorce. She thinks she’s still going to be married after everything is said and done and so this has to work out for her or else she would truly be left with nothing. Danielle’s marriage also isn’t stable as it is. She and her husband Garrick have had issues and divorce was mentioned in the past. This in turn makes signing the divorce papers all the more emotional.

Danielle has to tell a judge that her marriage is irrevocably broken. She has to basically lie to an official. She even has to reassure her family because they all think this a crazy idea and they’re concerned for her. Her parents don’t understand the polygamous lifestyle. It goes against their beliefs and what they raised her to believe.

Danielle’s family are Christians. They think a man should only have one wife and a wife one husband. Danielle’s new take on what the bible means to her was risking alienation from her loved ones. They don’t get why she’s agreed to this. Garrick’s family doesn’t get it either and they’ve cut him off.

They have nothing to do with Garrick because he thought he was either a sex maniac or Danielle a lesbian. So, choosing polygamy hasn’t been easy on either of them. There have also been cases of the first wife leaving after the second wife joins the picture. Tosha joined the Jones family as the second wife and, six months in, the first wife had a change of heart. She left her husband. She now has to share custody with him and his remaining wife.

Tosha and Cidian are still polygamists. They’re still seeking another wife for Cidian and they weren’t going online or using the internet to do it. In their case, it was Cidian going outside and meeting people. He would talk to people with mutual friends. He also considered anyone who might be interested in joining their family. Cidian seems to have control over the second wife selection and Tosha wasn’t really doing anything.

She didn’t even bother speaking to her own family about it. They had to hear what was happening from the rumor mill and that scared her mother. Her mother came right out and asked Tosha if she was in a cult. Tosha told her she wasn’t. She also said she’s happy with her family and that extending it to add someone else was both her and Cidian’s idea.

This is usually what the first wife says. They’re all excited about the idea of a first wife when they’re discussing taking different tasks inside the house, but the reality of the situation is that it’s three people in a marriage, and they have to remain on top of each other. Kaleh moved out after almost two years in the Clarks family. She moved out because she felt frustrated with the first wife Vanessa and the tension got to be too much.

Kaleh didn’t leave her husband. She still considers herself married to him and she did come by to help him and Vanessa move into a new house but the tension remained. Kaleh and Vanessa had to talk after they finished moving in because Vanessa had been hurt when Kaleh left.

Kaleh didn’t just leave the house for a few days. She took everything she owned with her and Vanessa had felt abandoned. She was hurt by Kaleh and Kaleh was frustrated with her life. The reason she blew up after Vanessa criticize her once was because she didn’t feel as important as Vanessa.

Vanessa goes out and she works. Kaleh didn’t. She was the stay-at-home wife and so she felt she couldn’t decide where they should use or save money because she wasn’t the one bringing it home, to begin with. Both women were frustrated and they had to get it all out before it turned their relationship toxic.

And then there’s the kid’s aspect. The new wife having a child is going to be a problem and everyone on the outside looking in can see that but the couples seeking sister wives don’t.