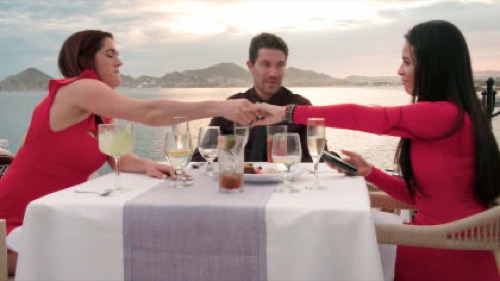 The Winders debate if they’re ready for Kimberley to visit; the Clarks’ relationship with Kaleh is tested.”

In tonight’s episode of Seeking Sister Wife, the episode begins in Cabo San Lucas, Mexico with the Merrifields. Garrick and Roberta are on their solo trip and it has been very emotional for Dannielle as Roberta told her that she was intimate with Garrick that first night and Dannielle feels like she wasn’t being honest. She is not upset about them being intimate, they sacrificed time that they could have all been together. Dannielle knows she has to open up and tell Garrick how she feels today.

Meanwhile, Garrick had a really nice time with Roberta, and he has a lot to think about. Robert on the other hand was thrilled with her long day with Garrick, but her thoughts were also on her sister if she was okay alone. She truly hopes that Dannielle can work out her jealousy issues. Robert heads into the shower and leaves Dannielle with Garrick, so she can have alone time. Garrick tells Dannielle she had a good day.

Dannielle opens up and says she was really jealous when they talked about his intimacy with Roberta. It wasn’t easy because she wasn’t expecting it. Garrick says that Robert loves her so much and if she is not happy, she would give him up for her. Dannielle is touched by how Roberta loves her, Dannielle is reduced to tears, she had no idea she felt that way. Dannielle tells Garrick that she wants to know that she is enough for him. He says she is the biggest blessing in his life and should always be confident in their love.

Los Angeles, California and the Snowdens, yesterday Tayler told Ashley and Dimitri that she wanted to stay. She is was not sure before she came into their home that polygamy was as good as they said it was, but she thinks it is now after being in their home. Dimitri and Ashley are talking about their conversation with Tayler, Ashley says it was intense and exciting. Considering that this was Tayler’s first visit, it was a shock that she wanted to stay. Ashley loves the way Tayler is with the children, but she thinks there still is a lot of dynamics that they have to know.

Ashley and Dimitri are in agreement, they are choosing Tayler, she fits. Ashley is excited for the children, to have a potential second mom. Dimitri is excited but says you don’t know how it is going to work until you do it. Tayler calls her mom, she tells her that she has decided to move in with Snowdens and stay in LA, the goal is forever. Her mother says she is not over the moon about this whole thing and she is kind of hoping it is just a phase. Tayler does not have her mother’s blessing on this, which is very clear from their conversation.

Southern Utah and the Winders, it has been three months into covid and Sophie says life with a new baby has been a big adjustment for the family. When Ephraim came home, Tami felt like she was doing everything, so she went to talk to Sophie. Both women felt the same, Ephraim was a newborn and they just had to let things settle in. Today is Colton’s birthday, they are working on a birthday dinner for him. Colton is never really animated, but he was surprised that the two women made him dinner and a cake for his birthday.

At dinner, Sophie asks Colton how he feels, he says weird at thirty-three. They talk about a potential sister wife, Kimberly, they have been talking to her for about a year now. They have kept in contact, but have not rescheduled her trip yet. Tami thinks they should reach out to her, Colton thinks adding another wife might be crazy. Sophie thinks they should give it a try. Colton tells them his concerns, he feels like he hasn’t had any spark with Kimberly. The overall picture that he thinks they need to keep in mind is the way that their family grows, isn’t determined by what they want, it is what God wants. The main thing he wants for his family is that it fits with what God wants.

Fuquay-Varina, North Carolina, and the Clarks. Several weeks into filming, the state of North Carolina issued a stay-at-home order to slow the spread of coronavirus. For the safety of the cast and crew, production was put on hold. Once filming could safely resume, the crew returned to catch up with the Clarks. Jarod and Vanessa say that the pandemic has been life-changing. Vanessa still continues to go to work, but schools and daycares are shut down.

Jarod in the meantime has been to daddy daycare. Things with Kaleh got a lot more difficult due to covid. Kaleh never moved into the house with them, she decided to stay with a friend. Their communication with Kaleh is not good, they don’t know if it is because of covid, or because of her. Vanessa would love to have Kaleh back, but they gave her the space that she wanted, and that caused the relationship to end with Kaleh. Vanessa says it is hurtful because she was her first sister-wife, they were together two years and she wanted it to work, but she can’t force it on her.

Back to the Snowdens, a few days after Tayler decided to stay, covid-19 began triggering travel restrictions all over the world. Christeline and the Snowdens decided that she and her two daughters should expedite their next visit, so they wouldn’t risk being apart for months or potentially longer. Ten days later, they got on a plane, just as all international incoming flights to the US were banned. Ashley says that life has been a little bit hectic, Tayler has been living with them for weeks now and things are going really well. Tayler and Dimitri have not been intimate yet, so they are not alternating nights yet.

On top of Tayler moving in with them, they never stopped communicating with Christeline and they expedited her trip due to the pandemic. Christeline and her girls, Kiana and Hayden, are not staying with the Snowdens, but they want her close so they can see how they mesh with each other. Tayler told Ashley that her conversation didn’t go well with her mother, but she is still staying. Two hours later, Christeline is there and she is so happy that she just made it from South Africa with her two daughters, she is so excited to start her new life with the Snowdens. Dimitri is so happy to have Christeline there, it means his family has more love and he can have more children. Christeline says her family was very shocked about her move, but they were very supportive. Dimitri hopes this works out, there is so much to consider.

Back to the Winders, Tami is in the kitchen, Colton comes in and tells her the baby is asleep. Colton sits down to speak to Tami, she says things are starting to settle down because things were so crazy. Colton asks her if it is hard that the baby is here because she has been trying to get pregnant for three years now. She can get pregnant, but she miscarries. Her daughter is five and she had hoped to have another baby by now. She tells Colton that she struggles with telling him that she has a positive pregnancy test because she miscarries so much. Colton says it is sad because one of the ways they can serve God is to grow their family. In a way it is hard for Tami to see her sister’s wife with a new baby, she wants it for herself, and every time it doesn’t work. Colton still doesn’t think it is the ideal time to add another wife to this wife, but it is up to God, not them.

The Merrifields are still in Cabo San Lucas, Mexico. Tonight is their last night in Mexico, tomorrow Roberta is going back to Brazil, and Garrick and Dannielle back to Colorado. Roberta thinks it was a good trip for their relationship. She thanks Roberta for the divorce and tells her that her husband’s love is not a paper. Garrick says they are going to apply for the K1 Visa. Garrick is reduced to tears with the thought of Roberta leaving, he says he loves her very much.