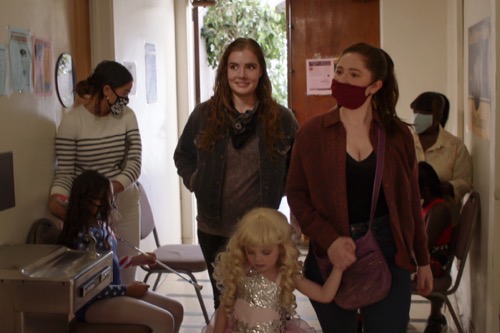 Tonight on Showtime the uniquely twisted and highly entertaining show Shameless returns with an all-new Sunday, January 10, 2021, season 11 episode 4 called, “Nimby,” and we have your weekly Shameless recap below. On tonight’s Shameless episode, as per the Showtime synopsis, “The Milkoviches move in next door and wreak havoc, leading Frank, Kev and Liam to plot how to get rid of them; Mickey embarks on a new security gig for Kev and V and drags Ian along against his will.

V and Debbie turn into stage moms when Gemma and Franny compete in the Little Miss South Side beauty pageant; Lip gets a big surprise when he reluctantly agrees to go to brunch with Tami and her old high-school music teacher.”

Tonight’s Shameless season 11 episode 4 is going to be great, and you won’t want to miss it. So be sure to bookmark this page and tune in for our coverage of Shameless tonight between 9 PM – 10 PM ET! While you wait for our recap, make sure to check out all our Shameless spoilers, recap, news & more, right here!

Frank is woken up to hearing gunshots, he goes outside and the rest of the family is already there watching the Malcoviches, Mikey’s former family , move in next door. Meanwhile, Carl is on the job, they get a call because some is loitering. At home, Debbie can’t find Franny and when she does, she finds her in the bathroom and she put super glue in her hair. Tami tells Lip that a former teacher of hers invited them to brunch. Lip doesn’t want to go, Tami says she is going anyway.

Mickey finds Ian having breakfast, he says he is trying to fnd the energy to go out and find another minimum wage job to make his parole officer happy. Mickey offers him a job, Ian asks as what, a get away driver. Mickey says for security at the Alibi.

Frank and Liam are outside, Frank says living beside the Malcoviches is like moving near a nuclear waste dump. Liam says they should leave, Frank says Gallaghers don’t run.

Frank heads inside the house and says he is starting a Gallagher war to get rid of the Malcoviches. Mickey says Franks is trying to make his family sound way worse than they are.

Lip ends up going with Tami to have bring with her former high-school teacher, he greets Tami and just about grabs her butt when he hugs her. Then he mentions that his fiancé couldn’t make it, and Tami looks uncomfortably surprised.

Ian comes out of the shower, he finds Mickey with a gun. Ian asks him what happens if he gets arrested, he will go back to prison.

Frank heads over to Kev and V’s house and tells them they have to band together and get rid of the Malcoviches. Kev tells him living next to them can’t be worse than living next to him. Kev and V head outside, the Malcoviches have a confederate flag hanging from the front porch and Terry has a gun ticked in the front of his pants. Kev turns around to Frank and asks how they get rid of them.

Debbie bumps into V, both their children are dressed up and they find out that both are in the Miss Southside pageant and have been deemed finalists.

At brunch, Tami is really enjoying herself as her former teacher is being very flirtatious. He gets up to go the washroom and Lip tells her that her teacher is crushing on her. Meanwhile, Carl and his partner Janes, have bust some people for drugs and Carl knows one of them. Not all of them were sorting pills, but she plants them on everyone. Carl tells her that everyone is not bad, she says she needs two them, he can pick. Carl lets his friend loose, and then tells him that he has to pick two guys to give over to his partner.

Lip finds out that Tami was over at her teacher’s house all the time back in 2010; he knows they were seeing each other. At home, Tami can see that Lip is upset. He tells her it is pedophile shit, she was much younger than her teacher. She says it wasn’t like that, it was beautiful.

Frank takes Kev and Liam to a mosque and asks for their help in getting rid of the Malcoviches, Frank asks them to do it for Liam. They agree. When Frank tells them it is against the Malcoviches, they say they forgot to pray and head inside.

At the pageant, Franny freezes on stage. V walks in a reminds the judges about the time limit, Franny has to get off stage. Outside the hall, Debbie confronts V.

Mickey and Ian show up at Kev’s house to get the money, they are dressed up in military outfits for the job. He gives it to them the money to bring it to the grow house. Frank is surprised and asks what about him, Kev says he doesn’t need him anymore, he replaced him with a legal marijuana farm that is back after their supply went dry for a spell.

Jane and Carl are back to see the loiterer, Jane gets out of the car and attacks her – takes her purse and throws all the cigarettes on the ground and stomps on them and tells her it is the last warning. The woman calls Jane a oink oink Oscar Meyer Porky Pig Bitch. Jane takes out her gun and tells the woman to strip, lose the dress and the wig. Jane walks away with the dress and the wig, leave the woman there crying.

Frank keeps the Maclcoviches’ dog busy and Liam goes in to find Mrs. McCurd up in her bed, he asks if she was taken against her will. She says Terry Malcovich is a beast in the sack and she thanks God every time that he came into her life.

All of Debbie and V’s efforts were for not, V tells the panel that Debbie is a convict and Debbie tells that V is a drug dealer. No south side kid is winning this pageant.

Ian and Mickey make the drop off, the new grower is impressed with them and ire them for $1000 a day.

Tami tells Lip that her former teacher and his fiancé Kelly are coming by, there is a knock at the door, and his fiancé looks like she is fifteen, and she mentions that she is one semester short of graduating high school! When Kelly and the teacher leave, Tami says he has daddy issues. Lip doesn’t know what to say.

It’s night time and the Malcoviches are still coming, they are having a bonfire outside in the empty lot beside the Gallaghers.

Carl is off0duty, he returns the wig and the cigarettes to the woman and tells her to move to another place and she’ll have no trouble.