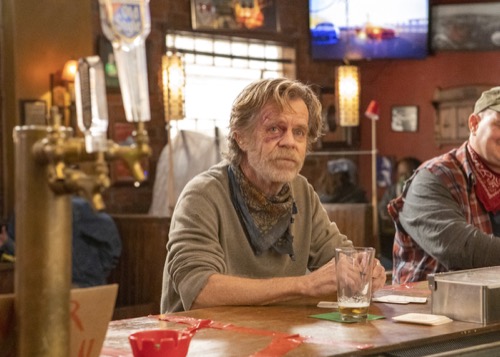 Tonight on Showtime the uniquely twisted and highly entertaining show Shameless returns with an all-new Sunday, March 14, 2021, season 11 episode 8 called, “Cancelled,” and we have your weekly Shameless recap below. In tonight’s Shameless episode, as per the Showtime synopsis, “Frank and Liam compete in a renaming contest of the middle school; Debbie has a day of zero responsibilities; Kevin tries to cheer up Veronica; Carl is put on the vice squad. Lip has a close encounter with the law.”

Tonight’s Shameless season 11 episode 8 is going to be great, and you won’t want to miss it. So be sure to bookmark this page and tune in for our coverage of Shameless tonight between 9 PM – 10 PM ET! While you wait for our recap, make sure to check out all our Shameless spoilers, recap, news & more, right here!

In tonight’s episode of Shameless, the episode begins with Lip, he is in jail. Meanwhile, the rest of the family is eating breakfast together. Liam reminds Ian that he has something after school, a naming contest. Frank asks him if he wants him there. Debbie didn’t go home last night, Sandy says she is not responsible for Franny, so Carl offers to take Franny to school.

Over and V and Kev’s house, V slept on the couch, he tells her to get up and get going, he opens the blinds. V says her mom is moving to Kentucky, she doesn’t want to talk about it. Kev says they have to open the Alibi and get the girls ready and she doesn’t want him to fix their hair.

Debbie wakes up, she slept over at a friend’s house.

Lip is being questioned in the police station and he is told that they know that he was involved with the robberies, tell them where the bikes are and maybe they can help him. Lip asks if he can go, doesn’t offer up any information. The detective opens the door and Lip walls out.

Ian and Mickey are over at Terry’s house, Mickey finds that Terry’s bag wasn’t changed and he threatens to shoot one of his brothers if he doesn’t do it.

Carl goes to the police station and inquires about his brother, he finds out that they are going to search Lip’s house next. Then Carl finds out he has a new assignment, the vice squad.

At V and Kev’s, he gets an email from Cook Country Clerk’s Office that important action is required. The girls look funny, Kev did their hair. He tells them that he has a surprise for mommy. Kev takes the kids to school and goes back home. V tells him that she is going to help her mom, she is trying to be a supportive daughter. Kev says he was hoping to spend the day together.

Lip is out of jail, he gets a text from Carl that the cops got a warrant to search his place. Lip gets home and minutes later, the cops show up, they go to the garage and there are no bikes there, Lip is relieved.

Carl leaves the station and meets his two new partners, they get in a cool sportscar and tell him to get in.

Frank is in school with Liam, he is trying to get Liam in the renaming contest.

V is helping her mother pack and is not happy that her mother is throwing so many of her memories in the garbage. Her mother tells her to stop killing her vibe she is moving, not dying,

Carl and his new partners, stop at a warehouse where there are lots of expensive sports cars. Carl finds out that they can take any vehicle they want, along with jewelry and watches, before they are logged into evidence.

Lip says goodbye to the police and tells them good luck at finding the real criminals. Tami is home, she says she moved everything out of the garage and he can’t put their family in danger again. Lip tells her this whole Gallagher thing is rubbing off on her, he didn’t think she had it in her. She says Carl called her and her brain went into autopilot.

Mickey tells Terry that he is getting him a nurse, Terry says just to take him out to the park and let him die in peace. Jasmin shows up, she tells Mickey that she is going to take good care of dad. Mickey and Ian leave and not even down the stairs when Jasmin comes running out of the house and into her car.

Carl is undercover, he goes across the street and buys drugs from a guy, his partners tell him to leave the guy and just take the drugs. Meanwhile, Debbie is in a bar doing coke with a guy named Jared.

V arrives at the Alibi and Kev wants to take her out of there to cheer her up but she says no. Frank is the bar and he is trying to come up with a name for the naming contest and he gets an idea, call the school, Gallagher Middle School. Kev tells they should pick up the girls together and do something special, she gives in.

Tami gets a call from Cami, Brad has been called into the police station. Back to Carl and his two new partners, they stop at another place and tell him to go in and do another buy, but this place is legal. Once Carl buys it, his partners mix it with the street stuff that is laced, their goal is to put legal dispensary out of business.

Debbie is making out with Jared when his husband walks into the room with a bunch of other people at the bar and catches them in the act.

Tami and Lip find Brad, but when he sees Lip he starts running and Lip runs after him and tackles him. Lip gets him in the car and they drive away with him. At Lip’s house, Brad says he wants to come clean. Lip says there is no way the cops are going to believe that he stole the stuff on his own, he is going to have to turn him in too. Tami tells Lip to get rid of the evidence, as soon as Brad gets there and starts crying, they are screwed. Tami says they need to take care of him because he is going to get everyone busted.

Mickey has another nurse for Terry, when he swears, she hits him over the head.

Frank tells Liam that they are going to join the contest together, they need to preserve the Gallagher legacy, Liam says no way. Frank tells him it makes sense to team up, Liam says again no way.

Carl calls the Alibi to give them a heads up that he and his new partners have the place on one of their stops. Meanwhile, Debbie gets a call from Franny’s school, nobody picked her up.

Kev surprised V, they are getting married on Zoom and her mom walks up, she has her old wedding dress that she got out of storage for V. They walk into the Alibi and Kev had the whole place decorated for V.

Carl smashes the Ferrari he is driving with his partner, so they don’t get to the Alibi. Debbie arrives home, Sandy is there and Debbie tells her that she doesn’t want to be with her. Sandy walks away.

Time for the wedding, Kev tells V that she looks perfect.

Mickey arrives home, Terry is dead, the nurse killed him.

In school, Carl arrives to support Liam when he sees Frank who gets called up to the front because he applied and qualified because he was an alum of the school. Frank has a moment, where he can’t remember the name he came up with. He looks over and sees Johnny, a guy who bullied him when he was a kid. Frank strips naked.

Then, we see Lip, Carl, Liam, and Debbie in a clinic. Liam says he won the contest. Tami walks in and says Brad is handcuffed to the door. The doctor comes out and tells the kids that Frank has alcohol dementia, some days will be good and some days will be bad, very bad and they can lead to confusion and anger.