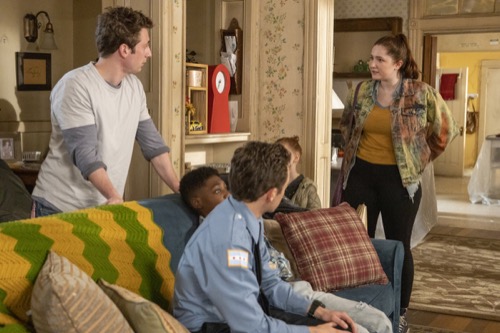 Tonight on Showtime the uniquely twisted and highly entertaining show Shameless returns with an all-new Sunday, March 28, 2021, season 11 episode 10 called, “DNR,” and we have your weekly Shameless recap below. In tonight’s Shameless episode, as per the Showtime synopsis, “Liam and Frank embark on a journey to get Liam into STEM school; Carl’s disillusionment with the police force comes to a head.

Debbie hunts for a new place; Mickey and Ian consider the West Side; Kev meets Veronica in Louisville.”

Tonight’s Shameless season 11 episode 9 is going to be great, and you won’t want to miss it. So be sure to bookmark this page and tune in for our coverage of Shameless tonight between 9 PM – 10 PM ET! While you wait for our recap, make sure to check out all our Shameless spoilers, recap, news & more, right here!

In tonight’s Shameless episode, the episode begins with the family watching the news, the police are looking for Nighthawk, a famous painting stolen from the art institute. It is the same painting on top of the Gallagher mantle, Lip says it probably isn’t real. Debbie comes in and asks Lip when he is going to fix the hot water, she and Franny have to go look for a place to live with him selling the house. Lip wants the painting gone, and he wants help to do it.

Frank comes down the stairs and asks if that is the original painting. Frank doesn’t remember, and Ian says either that or he is a liar. Carl tells them to give him a day, he will scope things out. Liam offers to watch Frank, Ian suggested they just lock him in the basement as he did to them when they were young.

Carl is at work with his partner who is talking about the painting, he says everyone is looking for it. Carl asks what the punishment would be if someone turned it in, his partner says if they were poor, they would accidentally be shot when they turned it in.

Liam asks Frank if he stole the painting, he says apparently. Liam writes Lip’s phone number on Frank’s arm, he says just in case they get separated. Frank tells him not to let China steal his country, no how many covid flus they send their way.

Lip is at home with Fred, he makes coffee for Tami and she asks him how much longer before he has this place ready, he says a couple of days – she heads out.

Ian and Mickey are in the Alibi having drinks. Ian tells him that they have to find an apartment. Meanwhile, Kev is picking up some supplies for V’s mother when someone gives him a coupon for a hamburger.

Debbie and Franny are checking out an apartment, Debbie starts to look around and hears “All By Myself” playing, she tells Franny it is time to go.

Lip calls to find out if the job he applied for has been filled, it has. He looks at Fred and says that is number three. He calls another one, they hired someone but they might have another opening. The furnace guy comes to the house, Lip is on the phone and tells the guy to go downstairs. Then Lip remembers that the painting is in the basement and runs down, too late, the furnace guy sees it and he tells hi it is a fake. The guy offers to buy it and Lip says no, it has sentimental value.

Carl and his partner stop by a protest, Carl tells his partner they look peaceful they are mostly old ladies. Kev is having his burger and finds out the bartender is dipping in the alcohol and the owner is frustrated and can’t believe she would do that with the tips she makes, almost two hundred. Kev offers to get behind the bar and tend if he gets to keep the tops.

Frank stole a delivery truck; Liam is in with him and Frank asks him how long it has been since he has been a delivery driver. At home, the furnace repairman tells Lip that the pipes are ancient, he is going to have to replace them, probably cost a couple of thousand and he can’t turn the gas back on until they are fixed. Debbie calls Ian and tells him that they should all live together.

Kev is having fun behind the bar; one woman asks if he is single just as V calls him and asks where he is.

Carl arrests the homeowner where the protests are going on, he tells him that he is double-parked and, on the phone, while driving. The guy says he has the mayor on speed dial and Carl says he doesn’t care.

Ian and Mickey go check out an apartment for rent it has a pool and Mickey goes for a swim while they are there. Ian says they should rent the place. Mickey is against it, it is on the west side. Ian asks him to just think about it, it’s nice.

Debbie stops at another place with Franny, there is a room for rent and she finds out it is in the garage and she is not fond of the idea.

Lip is fixing a light when Tami comes in, he tells her the pipes are going to cost a couple of grand and he has to fix it before he can sell it. There is a knock at the door, new owners come in with paint samples. The guy offers to buy Lip’s bike and he sells it for less than he wanted, but he does it because he needs the money.

Franks is sitting on the stairs, he sees Liam and says did you hear about the delivery van that got stolen, cops were all over the place. Liam says he doesn’t know If he can do this, babysit him. Frank says it is a lot for a nine-year-old kid, Liam tells him that he is eleven.

At the bar, Kev is walking away with a wad of cash and is told that there is a job there for him if he wants it.

Ian tells Mickey that he signed the lease and it will be good for them, without either of their family. Ian says they will always be from the south side but now they have a heated pool.

Carl gets told off by Sarge for his arrest, she tells him that they don’t arrest people driving in Mercedes or other expensive cars, they pay the bills.

Mickey and Ian are home, Ian tells Lip that he signed a lease, they are moving in. Mickey is upset because there is still no hot water, he passes by Lip and knocks the pliers out of his hand. Lip tells him to pick up the pliers, Mickey won’t do it and the two get into a fistfight.

Kev is back to see V and tells her that he got offered a job and he made more in tips in one day than they make at the Alibi in one week. She tells him that she was offered a job in congress, they smile and say, “are we really doing this.”

Lip is sitting on the steps outside, Ian comes out, he picked up the wrench and he gives Lip and bag of frozen peas for his face. Lip tells Ian that he doesn’t know what he is doing. Then Ian tells him that if he hits his husband again, he is going to kill him. They go in the house to look for the painting, they find Franny, she put stickers all over it.

Frank is getting a tattoo; Liam is with him and he tells him that he is happy he got to live life his way. Frank got tattooed on his chest, do not resuscitate.

We end the episode by seeing the painting, with all the stickers on it, in the subway car and a homeless man walks in and finds it.