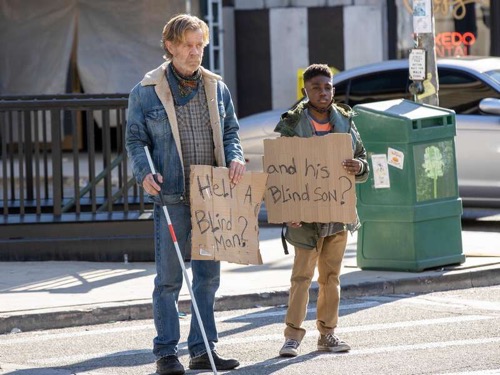 Tonight on Showtime the uniquely twisted and highly entertaining show Shameless returns with an all-new Sunday, April 4, 2021, season 11 episode 11 called, “The Fickle Lady is Calling it Quits,” and we have your weekly Shameless recap below. In tonight’s Shameless episode, as per the Showtime synopsis, “Kev and V announce their big news. Lip has some promising leads on selling the house, forcing Debbie to reevaluate her future and her history of regrettable love interests.

Ian and Mickey try to adjust to a vastly different life on the West Side. Carl’s commitment to the force is challenged when he’s reassigned to an unglamorous police unit. Liam reminds Frank of everything that makes Frank, Frank.”

Tonight’s Shameless season 11 episode 11 is going to be great, and you won’t want to miss it. So be sure to bookmark this page and tune in for our coverage of Shameless tonight between 9 PM – 10 PM ET! While you wait for our recap, make sure to check out all our Shameless spoilers, recap, news & more, right here!

In tonight’s episode of Shameless, Mickey and Ian are in bed, Mickey can’t sleep so he goes for a walk. He gets on a train and goes back home and finds Lip painting the place. Lip says he thought he moved out; Mickey tells him to bug off. Mickey goes upstairs, opens the window, and sleeps like a baby to the sounds of sirens and people screaming outside. In the morning, Carl comes downstairs, grabs a coffee, and leaves.

Debbie comes down and says he is pushing her and Franny out. He says he can’t take care of her anymore; he has to take care of his own family now they are all adults. Mickey wakes up and sees Frank in the bed, he tells him that he pooped himself. Frank comes out of the room and tells Liam that he just peed and shat himself. Liam tells him to get in the shower and then they are doing some Frank things.

Mickey returns to the apartment; Ian says he slept great. Mickey says he has to get some laundry done and check to see when their furniture is getting there. Ian kisses him.

Carl is at work; Tipping is there with him. The sergeant tells Carl and tells him that Mr. McManus is filing a brutality report against him, he should just go over and apologize, the guy will probably drop the charges. McManus says he was sta

nding by his car, in front of his building and slammed against it by Carl, now he knows how every black man in America feels. Carl loses it, calls McManus a privileged piece of crap who evicts people from their homes. Carl says he was fine apologizing so he would go away, but this guy showed him what kind of cop he wants to be, he takes his apology back, he is going to be the voice for people who don’t have one.

V and Kev are in the bar, she tells him the money came through, they sold their house. Kev says it is official, they are moving to Louisville. Debbie comes in, Kev tells her they sold the house and are moving to Louisville. Debbie tells them they have such a good relationship; she can’t even find a partner. V tells her that there is nothing wrong with herself, she just has to love herself.

Frank and Liam are in the middle of the street, pretending to be blind, begging for money. One man pulls them out of the street and gives them money, and when he turns around, he gets run over by an eighteen-wheeler.

Ian goes to check out the gym, he puts the setting on the treadmill too high and almost ends himself flying, but a hot guy beside him pulls the stop button and saves him. Meanwhile, Mickey can’t stand the brightness of the moon keeping him up all night, he takes a garbage bag, cuts it, and tapes it to the window so the sunlight is blocked.

Lip drops by the Alibi to pick up a sink for a remodel, V tells him that they sold their house to a developer. Lip can’t believe it; he is busting himself fixing up the place and they sold there as is. V says they are just going to tear it down, they don’t care what it looks like.

The sergeant tells Carl that she loved his speech, but he has to demote him. Carl is now parking enforcement.

Debbie goes to see Tami and all she learns is that Frank ruined love for her.

Mickey goes to do the laundry, he takes someone’s clothes out of the machine, puts them in along with about 10 soap pods. Then he puts on some of the other person’s clothes.

Lip speaks to the developer and agrees to sell, but he asks for money. Frank and Carl walk into the bar, Debbie walks up to him and hits him square in the jaw. She tells him that he ruined love for her, and he says the only way she will find love is if she finds someone that is a bigger loser than her. Frank tells Kev the beer tastes terrible, then he vomits it all up. Frank cries that his body is rejecting alcohol, what is he going to do.

Carl stops to target a vehicle and Tish comes out of a store, she was driving it, the car belongs to her boss. Tish is pregnant, Carl asks if the baby is hers and she smiles and leaves.

Heidi got out of jail, steals a vehicle, a purse, goes back home and ties up her mom, and steals cash. Later she bumps into Debbie and it looks like love at first sight.

Lip is in the house selling whatever he can, the developer comes in and says her boss changed her mind, she no longer wants to buy the house. Frank and Liam are home, Frank asks what’s going on. Lip says he is fixing up the house to sell.

Debbie and Heidi sit down and get to know each other. Lip drops by the old house and finds Mickey there, he says he is not going back, he doesn’t fit in. In the end, Mickey gives in, but he says he isn’t changing for anyone.

Lip is trying to put things back in the house and gets frustrated.

Frank comes down the stairs holding a letter, he folds it back up and puts it in an envelope, then seals it. He prepares himself some drugs, he fills a needle, he shoots himself up, and says he feels so much better. Frank puts the envelope, that he wrote Gallagher family on the top of it, on the mantle, but it falls off. He gives himself another shot and passes out.