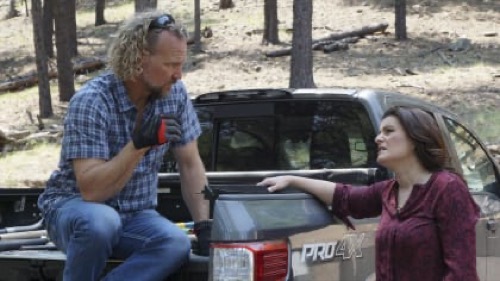 TLC’s reality show about a polygamist family Sister Wives returns tonight with an all-new Sunday, November 28, 2021, season 16 episode 2 called “Four Wives, Three Fires,” and we have your weekly Sister Wives recap below. On tonight’s Sister Wives season 16 episode 2 as per the TLC synopsis, “Janelle’s kids have strong opinions about Kody’s COVID rules, and Kody makes a surprise visit to Meri’s. Then, Kody organises an outdoor get-together for the whole family — their first time seeing each other in months.”

The family wants to come together. They all miss each other. They all love each other. They haven’t met up in months and it was especially hard on the kids. But Kody was worried about Covid-19. There was always a new variant wherever you look and it was especially dangerous because the family was so large. If one person got sick, it would quickly spread through a group of thirty. Kody has therefore been socially distancing even when he visits his other wives and the kids hate it. They couldn’t wait for life to return to normal. They also hated living so far apart from each other. They used to live in a cul-de-sac where they were all neighbors and the kids got to regularly see other as well as their father and now they can’t. There were restrictions in their area. There were also restrictions that Kody personally came up.

Kody was also getting the final word on a possible move to Utah. Kody sorta dismissed Christine earlier when she brought up going back to Utah because that’s where her family is and she wanted to be closer to them now that they wouldn’t be arrested for being polygamist. Kody considered the idea. He was open to it. He wouldn’t mind moving back and so it was odd he didn’t come right out to say so when Christine brought it. He instead shut her down. He also went ahead with building their dream homes and so there really wasn’t a need for him to ask the other wives what they thought and still he did. Kody visited Janelle. He asked her about moving back to Utah and she shut it down. She wasn’t going to move back there.

Janelle was happy in Arizona. She has a beautiful garden like she always wanted. Her kids were finally adjusting and so Janelle didn’t want to uproot them again. She’s been through that enough times to know how much she hates it. Meri also didn’t want to move back to Utah. Kody visited her house for the first time in months to get her opinion on the move and she was surprised to see him. Meri and Kody are no longer in a romantic relationship. They’ve settled for being friends. Meri doesn’t want to leave him because she believes God was asking her to stay with her husband and unfortunately that wasn’t God saying this. God wouldn’t want a wife to be ignored or treated as a friend. He would have wanted Meri to be happy.

And she’s not. Meri was basically living on the fringes of the extended family and there’s nothing she could do or say to save her marriage. Its over. Kody sees it as over and he didn’t want to go back or even work on the relationship. He only checked in with Meri to see if she was on the same page as Christine and she was not. Meri didn’t want to return to Utah. She also didn’t want to go back on the run again if the law changed about polygamy and so Meri was happy to stay. Both she and Janelle told Kody they wanted to stay in Flagstaff. Kody later talked to Robyn as well and Robyn also wanted to stay. Robyn hates uprooting the children. She wants to stay in one place and to just be happy.

Robyn was like Kody in the sense in that she was overzealous with health guidelines. The family met up with each other for a BBQ and it was disastrous. Kody was on everyone for staying six feet apart. He even yelled at the kids for wanting to play together. His three youngest children were still babies in a sense and all they wanted to do was play. But then there was Kody barking at them to stay apart. If he wasn’t saying it, it was Janelle. Janelle was constantly on the kids to stay six feet apart. It eventually led to her youngest son bursting out into tears. Solomon misses Truely. He wants to hang out with his sister and he didn’t want to get into trouble for it. And the family truly hated the social distancing when their one big family.

Christine actually visit Janelle with the kids. They don’t socially distance and the moms don’t care. They just want their children to be happy. And so it was just Kody and Robyn that were the issue.