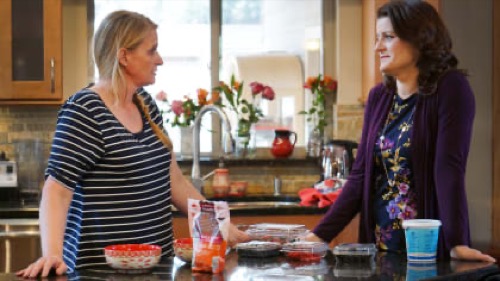 She doesn’t hang around with them because often it feels like she’s being tolerated and so she’s never comfortable around them. She doesn’t think they want her around. She doesn’t like visiting homes because she said the wife who owns the wife is like the Queen Wife and whatever she says goes. Yet, it was never like that with Christine’s own home because she didn’t put herself first. She put herself behind everyone else.

She doesn’t think there’s a Queen or at least she doesn’t name one with Robyn around, but she’s not happy and she’s tired of being considered last. Christine doesn’t want to live with her sister wives again. She doesn’t want to put herself last again and it’s like Kody wasn’t listening. Kody often dismisses Christine. He never takes her opinions into account and he did that especially when everyone was living together.

The family used to live in one house. The sister wives made it work because of their children and that’s because they had to. Christine doesn’t want to have to do anything else. She doesn’t want to be pressured or manipulated and it had taken her saying this several times before it finally sunk in for Kody. Kody was sold on the one house idea. He wants to live en masse and that’s not going to work with his family.

The sister wives are split on living together. Janelle and Meri don’t seem to mind it so much because they remember what it was like for the kids and how much the kids had loved it. Only Christine had hated it. She felt like a basement wife when Kody refused to shower at her place.

He would always shower at Meri’s and Meri wasn’t asking him to shower there. It was just something he did. He did it for years with Christine complaining and he only changed after Robyn entered the picture. This is what led to Christine feeling jealous of Robyn. She was jealous of how Robyn got to talk to Kody like an equal and she told Robyn so. Robyn admitted to Christine that she hadn’t been confident. She had been nervous the whole time and she was winging it.

They cleared things up between them and Christine got some of her sparkles back when it came time to check out wedding venues with Mariah. Mariah and her fiancé Audrey are getting married. They want to get married in Utah. They selected three different venues that all have something special about it and the first venue had snow-covered hills.

There was just one problem with it. The guests would have to go up the hill on the ski lift or else they ride up on snowmobiles and so that will be horrible for people afraid of heights. People like Janelle. Janelle panicked the whole trip up the hill. Other than that, the engaged couple had loved the location.

Their next location was the one with a castle. They didn’t think they were castle people but then they saw the place and they realized that they were castle people. The castle looked lovely. It was Meri’s personal favorite. The couple however was unsure. They weren’t ready to choose a location just yet because they liked everything they saw and so no decisions were made tonight. And besides venues, Kody also had to worry about his mom’s birthday.

Kody’s mom was turning 80. He wanted to be there for the party and so he traveled to Wyoming to be there with his family, but that’s when they started to hear about Covid-19. It came to the States. The pandemic was now everywhere and the family started to panic. They were scared about getting their mail. Kody had no idea how he was going to get home. He also doesn’t know how his family is going to deal with the pandemic because they had been working on their relationships right up until they were told to start quarantining.