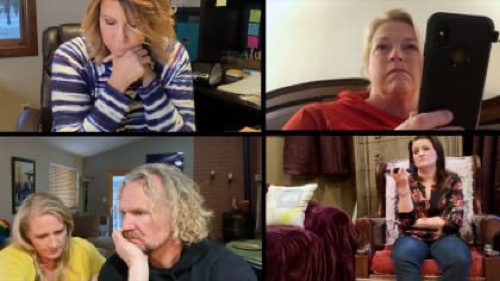 Robyn is terrified for her children’s health; Janelle tearfully tells Kody to stay away; as he decides where he’ll quarantine, Kody teaches the kids how to save toilet paper.”

The disease known as the coronavirus was now everywhere. The family didn’t think it would reach them. They thought they were safe and so it ended up taking them by surprise when the worst happened. The disease was everywhere they looked. The family couldn’t even meet in person anymore because of the risk and they had to have a teleconference. Christine had problems with her camera.

She was told it wasn’t good. The family was socially distancing and this couldn’t have come at the worst time. They were just recently talking about making more of an effort to be together. It was hard because the wives all lived far away from each other and so they were feeling the distance before all of this happened. Now, the family was going to be even more apart.

They were all trying to stay safe during a pandemic and Kody was traveling from one house to another. He had to take precautions. He especially had to be careful around his children with preexisting conditions. Like Solomon. Sol had RSV when he was younger and that condition could have killed him. It didn’t, but Sol still has remaining lung damage from it and he wouldn’t be able to survive another serious condition.

Covid-19 was a beast. It attacks the lungs and so Sol couldn’t afford to get it. Robyn has to think about these things as she goes outside and going outside has become a chore itself because Flagstaff is dead. The city basically shut down. It was dead outside and that’s good because that meant no one was risking themselves. Meri talked to her daughter Mariah. Mariah lived in Chicago with her fiancé Audrey and it was a big city.

Meri feared that it would be the next to be hit. She didn’t want her daughter or her daughter-in-law to be there when it hits and so she talked to them about moving. The girls were already going to move to Utah. They were leaving Chicago anyways and so it makes sense that they leave now.

Another concern was the toilet paper issue. The supermarkets and big warehouses were running out of toilet paper and so Kody had to talk to his kids about stretching out what they have. It turns out one of his kids from Christine had clogged the toilet, but not before they used half the roll and that was something they just couldn’t afford to do anymore. Kody showed the kids how much to use.

He also showed them how much Grandpa Bill (Meri’s father) would tell them to use and it was going gross. It even grossed out the other sister wives and they hadn’t been there for the conversation. After Kody was finished there, he went over to Meri’s. Meri was figuring out how to tell help the kids leave Chicago and she wanted to run it past Kody.

Meri was of the opinion that she had to go rescue her daughters. Only Kody was thinking of this differently because he said he was thinking of it in terms of family and the risk. Kody couldn’t drive the truck up to Chicago. He couldn’t risk himself like that because he would be risking each house he visited and so he told Mariah and Audrey to rent a truck on their own.

They were going to pack up their things. They were also going to be the ones driving it down and Kody didn’t want them risking Meri either. Meri was in mother mode. She felt she had to go there to help. She wanted to take a flight and to help them pack up and Kody didn’t want that. Kody still goes to Meri’s home and he couldn’t pick up something there that he could potentially bring to his other households.

Only the decision to not go to them has been really heartbreaking for Meri. She had wanted to help and she didn’t like how Kody sidelined her. Kody and her didn’t talk about it. He just spoke over her and without asking for her thoughts. Meri hadn’t liked that. Meri’s mood didn’t turnaround until Mariah and Audrey later showed up at her place. The couple was going to be staying with Meri. She has space and she likes seeing that they were safe for herself. Kody didn’t even show up to help unpack. He was staying away for a while. He just wanted to wait until it was safe before he visits them and that wasn’t the only house he won’t be visiting in the near future. Janelle told Kody that she doesn’t want him to come around right now.

Janelle has kids who worked outside the house. She also has a teenager who likes visiting his friends and so with so many taking risks at her house – it just didn’t make sense to have Kody visit. Janelle wants him to stay away from her house for the next few weeks. Kody understood her reasoning, but he felt that they needed to have a much bigger conversation with the other sister wives and so they later had another teleconference. At the teleconference, the sister wives began talking about Kody’s schedule. Christine suggested that Kody stays at a house for a couple of days before moving on to the next house where he’ll stay for another few days. Christine was just trying to offer something and, for that, Kody bit her head off.

Kody doesn’t like being objectified. He didn’t like them discussing his schedule because that felt like he was being passed around and so he shut down that conversation. Except that conversation made Robyn feel like they would be much better off if they lived in one home and she wasn’t alone in wanting one house. The others were seeing the benefits as well.