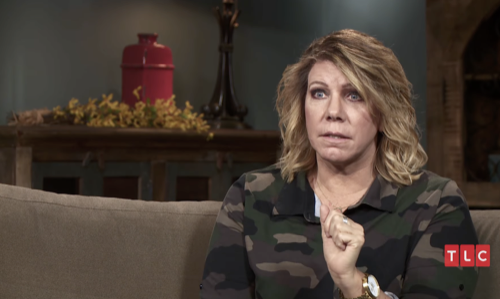 obyn is terrified for her children’s health; Janelle tearfully tells Kody to stay away; as he decides where he’ll quarantine, Kody teaches the kids how to save toilet paper.”

In tonight’s episode of Sister Wives, the family is filming themselves with their cell phones as the pandemic begins. Kody is the only one who will travel between the families. Before all of this, the family was struggling with being one unit. Janelle is scared and sees this as making things worse.

Janelle wonders just how dangerously this is but knows they need to be safe. Janelle calls Kody and tells him maybe he shouldn’t come to her house for 2 weeks. She is very upset to tell him this but she needs to keep everyone safe.

Christine is worried for Janelle. This is such a lonely time. Kody is upset over not seeing the kids. Luckily, all of the sister wives have their children home. The kids who are home from their school are keeping themselves busy. They all wonder if they are doing the right thing.

After they all quarantine for 2 weeks, Kody plans to visit all of the houses again. Christine thinks this is silly but whatever. She cannot see the other kids. For Meri, she doesn’t think she will see Kody because they are kind of done. Kody agrees in his own confessional that they have just been done dating.

Kody and Mariah get into a debate about the economy and people’s health. Christine doesn’t want them to get into the politics of this. After Mariah talks to her dad, she says she needs a nap. Christine laughs. She also needs a nap after talking to Kody.

All of the sister wives except for Meri worry about gathering as a family. Janelle talks to her kids about Kody not being over for a couple of weeks. They don’t blame her. Janelle tells Gabe he needs to try more with his dad. He has been very caught up with his girlfriend.

Kody isn’t thrilled Gabe has been with his girlfriend when he cannot see him. Janelle feels weird about this whole thing and also upset the communication between them all is getting worse. Robyn agrees their decisions and how and when they all talk is going to affect their overall relationships.

Gabe thinks it is unfair that they all are separating by moms and houses. He thinks they should all be able to see each other. Gabe thinks if they don’t plan to see Kody then why are they social distancing. He is annoyed by all of this.

Robyn and Kody sit down and tell the kids how Utah has decriminalized plural marriage. They are so happy after all of this time they are pretty safe. They are no longer felons. Later, all of the sister wives and the kids share their happiness.

Janelle is upset she cannot celebrate with her whole family. It is all anti-climatic. Later, after hearing about cases of covid in the county, Janelle worries she may have been exposed. She calls Kody to talk and also shares the stay-at-home orders for Arizona. She is upset over this.

Christine is wondering what they will do if they can’t gather in groups of more than 10. Schools then close, making life even tougher. Kody thinks this is so tough on seniors. The kids are all right with him as long as the school isn’t canceled completely.

Christine talks to her kids about the laws changing in regards to plural marriages. She recalls living in fear and worrying about having her father taken away. She was afraid when she was younger and into adulthood. It wasn’t as secretive for her as she got older. She never thought this law would be passed. She thinks about going back to Utah. But the kids don’t want to move back. She thinks they haven’t built yet. They could sell and move. She wants to talk to Kody and the other Sister Wives.