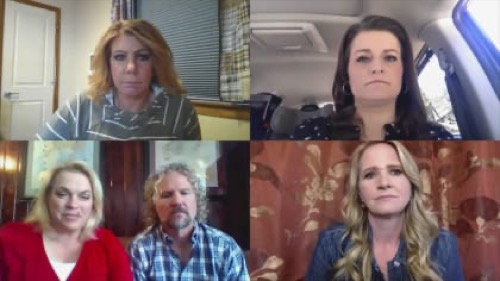 TLC’s reality show about a polygamist family Sister Wives returns tonight with an all-new Sunday, April 22, 2021, season 15 episode 9 called “A Family Stuck,” and we have your weekly Sister Wives recap below. On tonight’s Sister Wives season 15 episode 5 as per the TLC synopsis, “The Brown family is having problems communicating, and when Janelle sets out to resolve things, it’s apparent that maybe some things can’t be fixed. Then, Robyn opens up to Kody about having more children.”

In tonight’s Sister Wives episode, the Browns continue to record themselves with their cell phones amid the pandemic. Kody shares that he and Meri recently got together for their 30th wedding anniversary. They haven’t been doing well and haven’t lived together in 5 years. This has led him to wonder if he should be with all of his wives.

Robin thinks things have changed for them, especially since their move and covid. They all chat by video. Janelle doesn’t feel good either about any of this. She thinks the family needs to get together. Robin is unsure. Christine thinks they should get together. Kody has advised their family doctor. He thinks this is a bad idea. Janelle and Kody do not see eye to eye on the matter. He thinks she isn’t taking this all seriously.

Kody heads to Coyote Pass. He and Christine’s daughters went to picnic there and got stuck in the mud. They meet out there. Kody laughs at how deep the car is in mud. They need a tractor. Kody tries to pull it out with the car. Then they dig it out. They realize the battery may be dead. They finally get it out. Christine kisses Kody.

Kody has left Janelle’s home. They had a great reunion. He is now headed to Christine’s house to make up for her birthday. They head out on a drive. It is one of their favorite things to do. On their drive, they talk about the virus and how they need to see one another. Kody thinks they all need to be responsible. They arrive in Sedona to see the sunset, sitting side by side on a rock.

Christine feels like they have had a few hard years. She never wants to live as a large family again. When she told Kody this prior he didn’t care. She hasn’t felt like she was important to him. He thinks she doesn’t enjoy plural marriage and there are things he isn’t happy with.

Robin and Kody spend some time together. She wants to discuss having another baby. Are they done? She needs to know. She is 41 and her clock is ticking. Kody isn’t sure. Their last kid is now 4 and she is tough. Robin has promised to make it in the prelife. She is torn though. She doesn’t want to leave the children she thought she would have behind. They discuss adoption.

Hunter arrives home from the Air force academy. Janelle is thrilled. Kody won’t be able to see him for a couple of weeks. Later, Janelle visits Christine. They talk about her communication style and their differences when it comes to living together in one house. Christine doesn’t like it.