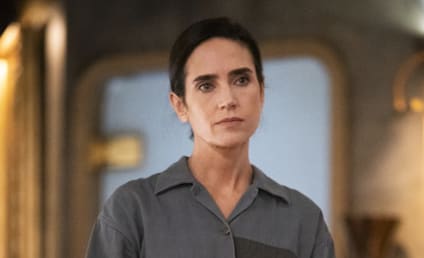 Ruth brings Andre a letter from Wilford. He is offering free treatment to frostbite patients. Andre signs something to the paper and gives it to Ruth. She reads it later after she is out of sight.

Alex brings the letter to Wilford. Andre has written, “what do you want?” The pastor finds Bess outside his door. She is crying after seeing several photos. Meanwhile, Bennett and Javi talk about how Mel has been out there for 3 days so far.

Andre sits and talks to Wilford’s ex-love interest, Audrey. He wants her to regain Wilford’s trust. She doesn’t want to do this. She suffered for years because of him. He lays out how she could help them all. Audrey agrees. They send Wilford an invite to dinner.

Wilford shares the invite with Alex who angers him when she brings up his paramour. He refers to her as his poem. Later, Wilford invites three of his staff to attend with him.

Andre, Bennett, Audrey, Ruth, and Sam talk about Wilford’s upcountry visit and the guests he is bringing. They don’t know them but hope to turn one of them.

Bess talks to the father about how many have died on Snowpiercer. Seeing their faces upset her. He tells her she isn’t alone.

Ruth lets Wilford’s doctors into work on the frostbite patients. Andre brings them to Josie after. Ruth would like to escort them to her. Andre dismisses her. Ruth tells Zarah how Andre doesn’t trust her. She feels pushed out. She is loyal to the train. Zarah talks about joining hospitality. Meanwhile, Andre fills Josie in on what is going on with Wilford and his visit.

Bess deals with Bocy and the others who could be the finger choppers. Several trains away, Miles visits Josie. They then bring her to the border so she can go to Wilford’s train for better care. The others watch as she is escorted.

Wilford tells Alex and his three staff it is his night before they head over the border. Zarah informs Andre she is now in hospitality after he sees her in a teal suit. He knows this is all Ruth.

Wilford arrives at the party. Andre brings the engineers out on video. They send Mel supplies. Everyone claps. Alex looks sad. Andre toasts Wilford. Right after he tells Wilford this isn’t his train. Audrey takes the stage to sing. Wilford is silent and intense. After, she goes to him, inviting him to be alone. He goes gladly.

At the party, Alec hangs with LJ while Bess hooks up with the bartender. Wilford spends time alone with Audrey. She appears different to him. Meanwhile, Wilford’s female staff member flirts with a bartender who is also Australian. It seems they have found therein with Wilford’s staff.

Audrey and Wilford reminisce about the past. He hasn’t seen her in 7 years. He has missed her. She recalls how he made her slit her wrists in a bathtub. “But I saved you,” he tells her.

Alex and LJ stare out of the window on the roof of Snowpiercer, smoking and talking. She admits she didn’t know she would care so much about Mel.

Zarah checks in on Audrey and Wilford. She is feeding him. Zarah looks embarrassed. She shuts the door.

Everyone gathers on the train to check in with the engineers and Mel. Alex shares that Wilford thinks Mel is dead. She thinks her mom could survive if anyone can. They all wait and finally hear the signal. Mel is all right.

Alex goes to bed that night in her bunk, looking at the route of the train. Andre checks on Audrey. She is dancing, she tells him Wilford is where he wants him. She, however, looks distraught.

Josie wakes to see what might be Wilford looking at her in the night through the glass.