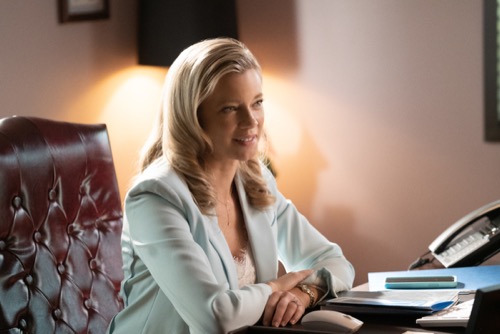 Tonight on the CW their new series Stargirl airs with an all-new Tuesday, August 17, 2021, season 2 episode 2 and we have your Stargirl recap below. In tonight’s episode called, “Summer School: Chapter Two,” season 2 episode 2 as per the CW synopsis, “Still on the lookout for evil in Blue Valley, Courtney grows suspicious after an unexpected visitor shows up at the Dugan house; Barbara and Pat become concerned after a visit from a mysterious antique collector; Cindy puts her plan in motion.”

In tonight’s Stargirl episode, Cindy’s mom is dancing in the kitchen when she arrives, smashing things and drinking. Her mom looks scared. Cindy uses a stone to entrance her. Meanwhile, in Milwaukee, Jennie, a young girl, is sent on her way from foster care. She is given a box with a ring before she leaves. It’s her father’s ring. She looks at it. It floats on its own in front of her, glowing green before attaching itself to her finger.

At home, Courtney and the family deal with the aftermath of a girl named Jennie. She had broken into their home for a green lantern. Jennie tells them he was her father. After they get acquainted, Jennie shares that she has heard of Pat. They invite Jennie to stay the night. Meanwhile, Courtney tosses and turns on the couch. Pat brings her a pillow. They talk. Maybe Jennie isn’t green lantern’s daughter. Pat thinks she is.

In the morning, Courtney wakes to everyone chatting and eating breakfast Jennie made. Courtney is annoyed. She heads to summer school. Yolanda arrives. Her parents are making her go to keep her out of trouble. Courtney tells her about Jennie. One student in the class is missing. The student is out in the woods, bringing some mystery person pizza. Back at the garage, Zeek helps Pat get his robot into shape. Pat tells Jennie all about her dad and they talk about the ring she was left. Pat helps her use the ring.

At school, Courtney vents about her suspicions about Jennie to Yolanda. At home, Cindy’s mom hears a voice that tells her “you will never escape her.”

A man in a tux with a topcoat and cane arrives in Blue Valley. He pays a visit to Barb, introducing himself as Richard Swift. He is a collector who loves magic. He is interested in a trust. The trust includes magical items.

Courtney and Yolanda arrive at the garage. They see Jennie. Pat reveals Jennie is a legacy. Courtney gets annoyed and shares her skepticism. Jennie leaves, upset. Meanwhile, Cindy’s mom continues to hear the voice. The voice tells her to kill Cindy.

Courtney and Pat talk. He tells her to ease up on Jennie. She wants to learn about her dad just like Courtney did. Courtney speaks to Jennie, telling her that she is the real deal and believes her. She has every now. Jennie gets mad. She just wants to find her brother. She throws the lantern.

Pat heads to the cafe to check out Richard Swift after Barb calls him. Meanwhile, the lantern is acting funny. They bring it outside. Pat hears the common and comes to help. Jennie picks it up. She calms as Courtney talks to her but suddenly the lantern explodes throwing them back. They look up to find Jennie flying above them.

The next morning, Courtney wakes. Barb tells her Jennie is gone. She left. Courtney heads to see Pat and apologize. He tells her a villain named The Shade may be in Blue Valley. She heads to get her staph.

Cindy arrives home to her mom wielding a knife. They fight. Cindy doesn’t want to but morphs into her alter ego and kills her mom. Cindy comes back too. She is angry. She tells her alter ego she is in control. She cries. She didn’t want her mom to die.