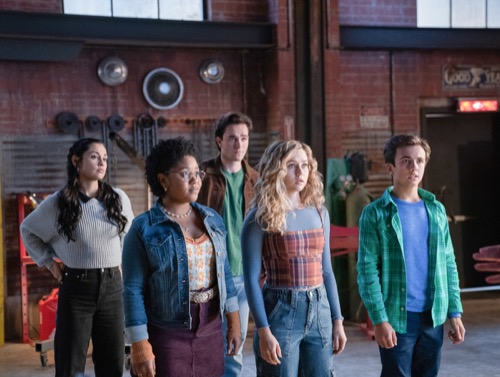 Tonight on the CW their new series Stargirl airs with an all-new Tuesday, August 24, 2021, season 2 episode 3 and we have your Stargirl recap below. In tonight’s episode called, “Summer School: Chapter Three,” season 2 episode 3 as per the CW synopsis, “After getting a taste of the superhero life, Mike pleads with Pat to let him join the team; after seeking help from Thunderbolt, the JSA prepare for a confrontation with The Shade.”

Christmas 2010 – Johnny and Pat are talking as Pat tinkers under the hood of his car. It’s Christmas Eve and they plan to drink egg nog. Johnny leaves for an emergency after a member of the JSA arrives and needs help. Pat, told to stay behind.

Present Day – Pat’s son, Mike, is delivering newspapers. He runs into a group of bullies. He is sick of being a human punching bag. He wishes he was a superhero. The next day he goes on his paper route. Something strange happens. He falls off his bike. The paper’s headline changes and out jumps a superhero. The pink superhero tells him he is Thunderbolt and he is here to help him and grant his wishes. He tells Mike he is part of the JSA. Mike makes multiple wishes that go wrong. He needs to be more specific.

Pat updates Courtney and the team about a new villain in town, The Shade. They talk and conclude that they aren’t sure how to do away with The Shade. Pat knows he is posing as an antidote dealer under the name Richard Swift.

Swift sneaks up on Barb while she looks at the inventory of an estate. He scares her. They make small talk. He sees an antibiotic box that intrigues him. He would like to keep it. She says no. The lights flicker and he is sudden gone.

In school, Yolanda gets another headache. She tells Courtney. As they whisper about fighting The Shade, a classmate listens in without them realizing it. After school, Mike sees the same three guys bullying a little girl. He wishes they would stop. The Thunderbolt rains Stop signs down on them.

Courtney and Yolanda run straight into Mike’s wish. They head to talk to Pat. Mike is forced to share that he took a pen from Courtney who took it from the JSA. Pat makes Mike call out the Thunderbolt. Pat wants to talk to him alone. The Thunderbolt tells Pat how he friended Mike because he feels just as alone as him. This makes Pat sad. Outside, Mike asks Court if he can join the JSA.

Court and the gang have taken a vote they tell Pat. They want Mike to join the JSA. Pat agrees he can work on locating The Shade. Mike and the Thunderbolt locate The Shade. Pat tells him to hang back while they go and fight. He is upset.

Pat calls Barb to tell her the plan to get The Shade. Meanwhile, Mike is having a hard time trying to control himself from making a wish. The gang arrives at the house where The Shade is hiding out. They find him sitting and ready for them with a table set for tea time. He finds it amusing they are kids. They agree to sit. He doesn’t want to fight and get all sweaty. Moments later Mike comes in and tries to get Thunderbolt to take out The Shade. But The Shade is too strong. He renders them all powerless before leaving.

Later, Yolanda tries to console Mike. He just wanted to help. Courtney interrupts to tell them The Shade is gone. That night, Barb and Pat lecture Mike and Court. Court tries to defend Mike. After their talk, Pat tells Barb how lonely Mike is. Meanwhile, Beth vents to Rick after she realizes she may never get Chuck back. She confesses her parents might be getting a divorce. Chuck comes back into signal but only long enough to tell her they are all in danger.

Swift opens the antique box atop the clock tower in town. He is going to kill those kids.