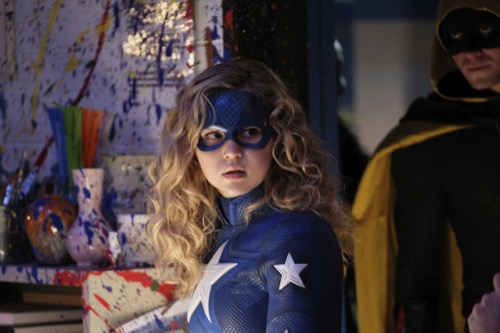 Tonight on the CW their new series Stargirl airs with an all-new Tuesday, September 7, 2021, season 2 episode 5 and we have your Stargirl recap below. In tonight’s episode called, “Summer School: Chapter Five,” season 2 episode 5 as per the CW synopsis, “As Pat and Courtney clash over their next steps in their search for Eclipso, ominous weather conditions in Blue Valley hint that he may be near; Cindy’s plan to recruit another student takes an unexpected turn.”

Ten Years Ago In California – A little girl wakes. She is scared her dad is after her. Her mom comes in a promise he won’t find them. That night her dad comes back. The little girl is Cindy.

Present Day – A local tells Cindy to stay away from a teen boy. She tells Cindy she knows she is bad just like her dad.

Courtney gets caught coming in after a curfew by Pat. She confesses she was out looking for The Shade. She wants him to team up with them and get Eclipso so they can get the diamond. Pat tells her The Shade is too dangerous.

Cam, a student at Courtney’s school, is painting a wall. The weather turns bad. He thinks it’s his dad, possibly Eclipso He heads back to the school. His teacher sees his sketchbook. He has been drawing Courtney. His teacher smiles. Just then, Courtney arrives. Cam blushes.

Cam runs into Cindy. She shares that she is sorry about his dad. He doesn’t believe her. Just when it looks like she plans to kill him, a teacher named Paul comes in. Cam leaves. The teacher talks to Cindy who does something to him. He hears a voice after she leaves.

The Shade visits Barb and warns her of Courtney’s snooping. If she gets knows where the dam one is he wants to know right away.

Rick sees Cam painting his mural. He stops his car and stares, telling Cam he doesn’t need anything. His non-verbal message is sent. Rick heads to Pat’s garage. Beth is there and swears she used the goggle to talk to Dr. Midnight. Pat thinks it is a hoax.

As Paul tries to teach a class he begins to cough. He rushes out of the room, gagging everywhere.

Mike drags Barb and his dad out to see a station wagon. He wants to make up for the mess with The Shade. Pat tells him he has a project for them that is better. Mike becomes more upbeat. On her walk home, Courtney sees Cam working on his street mural. They talk. He shows her his sketches. She smiles.

Paul talks to the voice. It is overpowering him. Meanwhile, Cam shows Courtney his house. He talks about his gardens and what he wants to do with his life. Just when they are about to kiss, Courtney gets a text about the weather and Eclipso. She has to go, she tells him. He is upset.

Night has fallen. Courtney meets the others at the school. They are dressed in their costumes ready to find the diamond and possibly Eclipso. They see their teacher Paul’s car. They head inside without Pat who hasn’t shown up yet. Inside they see stage artwork.

They cannot find Paul. Yolanda hears an ominous voice. The weather is picking up. Eclipso appears. He throws objects at them. Courtney sees Paul. He has the diamond. Suddenly everyone stops and the paintings disappear. Paul is on the floor. He tells them that his muse is gone.

Later, Pat talks with the kids. They share how it felt like Eclipso was working through Paul. Pat thinks he is getting stronger.

Beth’s parents come home. She confronts them. She knows they are getting a divorce. They tell her they haven’t officially decided to split just yet. They want to talk later as a family.

Cindy shows her evil associates a picture of Mike. He is what they need to wreak havoc. Meanwhile, Cam feels the powers of his dad.