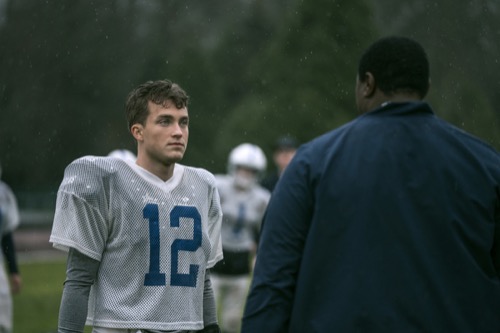 Tonight on the CW the series Superman & Lois airs with an all-new Sunday, March 9, 2021, season 1 episode 1 and we have your Superman & Lois recap below. On tonight’s  Superman & Lois season 1 episode 3 called, “The Perks of Not Being a Wallflower” as per the CW synopsis, “Clark shares some of his Kryptonian histories with Jordan and Jonathan during a family breakfast; Lois and Chrissy dig deeper to uncover the truth about Morgan Edge.”

So make sure to bookmark this spot and come back between 8 PM – 10 PM ET for our Batman recap. While you wait for the recap make sure to check out all our Supergirl news, spoilers, recaps & more, right here!

In tonight’s Superman & Lois episode the family is in the midst of painting the living room when Lois decides to be funny and paint Jonathan after he teases her about picking a color already. The whole family gets in on it until Clark hears trouble. He races away and saves dozens of lives, kids on a school bus, and more as he grabs a falling bridge.

At home, the family eats dinner. Clark explains what he can hear. This leads to a talk on being careful and not suspicious about their family secret. Meanwhile, Lana and Kyle argue in the car as Sarah gets in the car from therapy.

At school, Jordan asks Sarah if she wants to hang out. She cuts the conviction short and runs off to her other friends waiting for her. Back on the farm, Clark hears kids before zeroing in on Jordan. He hears him fighting with Sarah’s boyfriend. Jonathan has been getting involved. Clark senses trouble and rushes to the school hallway. He arrives just when Jordan looks to be losing control. He brings them home. Both of the boys are mad. How long has he been spying on them?

That night, Clark and Lois drink wine and talk about their day. She recalls when he first listened in on her. She was mad too. She tells him to make them the same promise he made her. In the morning, he promises not to listen in on them again. They accept his apology. At work, a woman comes in to see Lois about Morgan Edge. She wants Edge to pay for her son’s death. Outside, a man takes their photos from a car.

At cheer practice, Lana yells at Sarah for her lack of attention. Sarah quits on the spot. Meanwhile, Jordan decides to try out for football, running out onto the field in pads. Jonathan tries to tell him it’s a bad idea. But he is adamant. Jordan kills it out on the field. The coach makes Jonathan run 5 for not telling him about his talented brother.

At the diner after school, Jon and Jordan sit with Sarah to talk about his recent football tryout and her break-up with her boyfriend. Lana comes in. She asks Sarah what is going on with her. Sarah is just fine talking in front of the boys. She starts to air their dirty laundry; Lana is on pills, her dad sleeps on the couch, and more. Lana makes her leave. Clark comes in. He is ready for dinner. They don’t say anything about Jordan and football.

Working late, Lois hears a car alarm. She and her editor run outside to find one of their cars on fire.

Lois tells Kyle, who works in the fire department, that she thinks Edge was behind the car fire. He rolls his eyes. At home, Jon fights with Jordan above joins the team. Lois comes home. She was wrong about Edge and feeling stupid.

Clark heads to see Lana with the house paperwork the next day. She talks absolutely how great Jordan is on the field after venting about her family. Clark heads to the school and sees it for himself, Jordan on the field right after he takes down Sarah’s boyfriend.

At home that night, Clark and Lois discipline Jordan for playing football. He gets mad and storms off, telling Clark he wishes he wasn’t around like he used to be. Lois and Clark talk by the barn that night. She needs to head out. It seems there are other employees of Edge’s who are missing.

Jon talks to Clark. He thinks maybe Jordan needs football. He hasn’t seen him happy like this in a long time.

Lois arrives at the local motel. She is there to see the woman who told her Edge has something to do with her son. Lois heads into her room, seeing the door has been bashed in. Inside is the man who was taking photos outside of the newspaper. She attempts to run.

He comes at her, shutting the door so she cannot leave. They fight. She stabs him in the ear with a pen. He doesn’t flinch. She calls for Superman. He arrives in a second. They fight. He is as physically strong as Superman. Superman gets creative, freezing him out, punching him, and then giving him a clothesline. He knocks him into the exterior wall and right out of the motel. Lois calls for him. He rushes the woman in the bathroom to the hospital.

Lana finally talks to Sarah and gets her to open up. They talk about keeping their feelings inside and why Sarah would try to kill herself. She doesn’t like Smallville and he is unhappy. Lana tells her they will figure this all out.

In the morning, Clark shows Jordan his baseball mitt. He tells him about wanting to play sports when he was younger. But he mainly wanted to play for a girl. If Jordan wants to play the sport and he can try to control his powers, he can play. But Clark has to coach. He agrees.

At school, Jordan talks to Sarah. He tells her he is going to play. She plans to come to see him play.

At work, Lois’ editor apologizes to her. She has laid out the whole case on aboard. This is in fact something they need to look into. Outside of town, a woman kills a man in his car with fire shooting from her eyes.