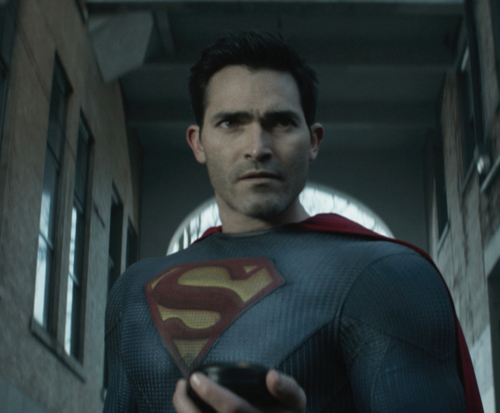 In tonight’s episode of Superman & Lois, Edge shows up at the football game. He makes plans with Kyle and Lana to take them to dinner. Lois is annoyed to see him. Her dad shows up right before Jordan is put on the field. He makes a TD. Lois’ dad looks at her. Later, he yells at her.

He is annoyed. Why didn’t she share Jordan has powers. Lois tells him they aren’t sure yet what he has. But she and Clark know what they are doing. Clark shows up. They defend themselves against sam. He details how everyone is afresh of Superman and he keeps the military in check. He also lets drop a prisoner who hates Superman is being moved.

At the diner, everyone celebrates Jordan. A fight almost breaks out. Jonathan stops it. Meanwhile, Lana and Kyle have dinner with Edge. He thinks she has a lot of potentials. Across town, Lois and her editor are paid a visit by Edge’s lawyer. He knows about her Daily Planet contract. She cannot publish anything.

A football player named Zack with a cast is upset he missed the game. He starts to dig at his cast. His arm begins to shake.

Clark practices football with the boys. Jonathan shares he is annoyed Jordan has been playing and he has been riding the bench. Lois comes out to tell Clark she is headed to see Edge, he is at the mines.

Lana and Kyle get ready for the town meeting. She thinks Edge is a jerk and he made her uncomfortable. She tells Kyle she is mad he didn’t even notice. She storms off.

Clark and the boys are at practice when General Lane checks on the prison transport situation. Zack takes off to the bathroom. Jonathan checks on him. In the bathroom stall, he busts his cast off. Jonathan tells Clark something is wrong. Zack comes out and takes off. Meanwhile, the prisoner sets off an explosion. He has his men meet him. Clark listens in and heads there, telling Jonathan later.

Clark arrives to find the prisoner gone but he has left him a message that they will meet soon.

Superman continues searching for the prisoner, informing the military. Sam gives the boys a talk about their obligation to do good. Their dad is special and doesn’t need to be distracted.

At the town meeting, Kyle rallies the town too while Lois tries to call Clark. He isn’t answering. She runs into Lana. She asks Lois to have a girl’s night out. The two votes in favor of Edge being granted access to the mines.

At home, Lois gets ready to go out. Clark arrives. He apologizes. She gets it but she is still annoyed. She feels like she isn’t a priority. She heads out to meet Lana. Meanwhile, the boys head to a party.

Lana and Lois talk about the men in their life and their annoyance. Lana does think Lois brings out the best in Clark.

At the party, Jordan tells Sarah he is actually happy while Jonathan keeps an eye on Zack. Zack cuts his hand and it begins to shake. He tries to brace himself, snapping the table edge off. He tells his friend who gets mad he broke his table. Zack runs off. Jonathan chases after him.

Superman arrives to see the prisoner. He has a contraption he uses to hurt Superman’s ears. Superman drops to his knees. He hears Jonathan call for him. Jonathan and Jordan are out in the woods trying to help Zack who cannot stop his hand from vibrating. Superman claps his hands, sending everyone back. He melts the prisoner’s contraption and calls it in. He rushes to the boys and rockets Zack high into the sky. The air is thin and will help him.

The family and Sam meet for a family talk. They share that Zack is a meta-human. Now he will go to a special school. Clark wants to know why they didn’t call sooner. Sam admits that was because of him. The boys are excused. Lois tells her dad he will not be welcome if he interferes again.

Lana seems to be feeling better. She kisses Kyle in the kitchen after complimenting him. He is surprised but happy. That night, Clark invites Lois to a romantic dinner in the barn. He tells her how important she is. Sam calls with a situation. She tells Clark to go and she means it. Sam calls in a new project and seems a lot like it may be against Superman.

Edge has his assistant punch a hole in the cave wall. She is appalled a meta. He tells her all about their overabundance of kryptonite.