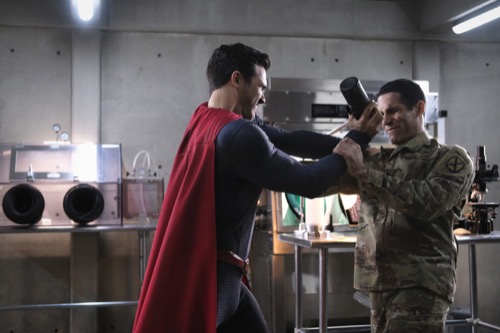 In tonight’s Superman & Lois episode, Lois meets with a therapist. She shares that she is afraid she may lose someone she loves. Back at the farm, she and Jonathan look around the RV owned by John Henry Irons while Clark and Jordan fix the truck.

At school, Sarah tells Jordan she may be performing in the school’s recital. He tells her he will be there to cheer her on. The military brings Superman John into a holding room. Superman asks who he really is since the real John died years ago. John tells him he will end him. In the RV, Lois explains to Jonathan that John is from another earth. John tells Superman he wants to see Lois Lane. Lois sees on the computer in the RV that there is another version of herself, one that is married to John and they have a daughter.

General Lane tells Superman that torture is a must if John doesn’t talk. Meanwhile, Kyle gives Sarah a peep talk about the recital. Jonathan witnesses Superman kill Lois while he looks through the RV’s computer. He then finds a weapon closest but is locked in the RV where it locks down. He screams. Lois hears. She tries to help and then screams for Clark. He saves Jonathan.

Lois gives Jonathan a lecture and becomes enraged. Clark wonders if she is all right. He suggests she talk to someone. At the bank, Kyle asks Lana if she lied about a job Morgan Edge may have offered him after he speaks with Larr. She tells him there is no job.

General Lane questions John. He tells Lane that Superman eventually kills him. Lois speaks with her therapist more, recalling her being scared about Jonathan and her miscarriage.

As John is being moved back to his cell, one of the soldiers attacks the other. It appears he is superhuman and wants John.

As Lois continues to talk, she realizes she never let herself grieve. At the school, Jonathan tells Jordan they need to talk. Jordan tells him whatever it is they are in this together. At the open auditions, Jordan volunteers to help Sarah when her dad doesn’t show to play the piano as she sings.

The soldier takes John to a dangerous place. The general warns Superman, where he has taken him, could kill him. Superman heads there anyway. He comes face to face with the meta soldier but is overpowered after a fight that involves kryptonite. John steps in. After he takes out the soldier he turns on Superman. Just as he is about to kill him, Lois and the General along with other soldiers. Lois stops John by explaining that she knows about their daughter and that in this world Superman is good. He puts down his weapon.

Superman and the General talk. Lane tries to explain about the kryptonite, he had to have it. Just in case Superman becomes an enemy. Superman shares that Lois might be on to something about Morgan Edge creating his own army of meta soldiers.

Lois talks to Jonathan and explains about her miscarriage. She lost it and she didn’t mean to. She also knows how hard it is to be human among superhumans. They hug. Meanwhile, Kyle apologizes to Sarah for missing her recital.

As John leaves in his RV, he says goodbye to Lois. Superman drops in to tell him they should team up if there is a war coming. John isn’t so sure. He hits the road.