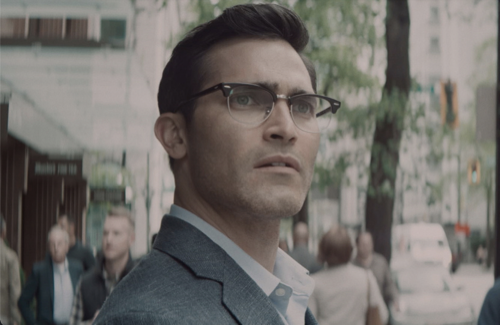 In tonight’s Superman & Lois episode, a teen boy walks through the snowy mountains. He has a red crystal. It appears he is trying to go somewhere. When he cannot, he throws the crystal to the ground. It makes the earth shake, opening a cave. He enters and comes face to face with Jor-El who welcomes him as his son. Jor-El tells him about his life, his origins.

Later, a twenty-something Clark arrives home to tell his mom how he has met his biological father. He knows now what he can do. He understands everything. After he heads to see Lana but she is engaged to a young Kyle. He is too late and has been gone too long. His mother gives him a cape. It is time to save the world.

In the city, Clark saves a young boy, changing from a suit to a cape in a phone booth. After, Clark tries to get a job as a reporter with limited experience. He lands the position with poor pay. Lois Lane will show him the ropes. She tells him all about the city’s new superhero who is helpful but dominating the headlines when it comes to other stories. They spend countless hours together, working for the Daily Planet.

One morning Lois comes face to face with a man terrorizing the city. Clark hears she is in for some trouble. He rushes there, saving her and several people. Lois helps too, tasing the bad guy. After, he shakes Lois’ hand. She coins him, Superman.

Lois books the first interview with Superman. During a break, Lois’ producer tells her how she thinks Superman is into her. But Lois has a thing for Clark. Superman overhears the whole thing, smiling.

Clark brings Lois to meet his mom at the farm. She is nervous. Clark decides to tell her who he really is. It isn’t long before he proposes, they marry and move in together.

Something strange happens to Clark. When he tries to tell Lois she tells him she is pregnant. They head to the doctor’s later. They are having twins, boys. Clark keeps seeing a flickering image. He realizes none of this is real. He comes to reality, seeing Edge.

They are in the fortress. Edge has used this to his advantage, discovering Superman has a family and a wife. He believes Superman isn’t living up to his true potential. They fight.

Lois sits with Lana and Kyle, talking about Edge. Kyle feels so bad. They wonder where Edge is. The military is still patrolling the town. Sarah vents to the boys about her dad and how weird it was to seen him like that.

When Sarah and Jordan are alone, she kisses him. She wants to be more than friends.

Kyle apologizes to Lois for the way he has treated her. He was wrong about her and this whole situation. She accepts. They all leave Lana and Kyle’s. Outside, Edge drops from the sky. He tells them Clark won’t be home soon. Jordan tells him to leave. He shoots fire from his eyes at Jordan. Superman drops down. He gives in to Edge. He just wants his family safe.

Superman is brought with Edge out in the middle of nowhere. Edge’s son appears. She throws a yellow stone across the land. It moves rock and sand. Edge brings Superman to meet his father in a cave. Superman has decided to submit.

Lois arrives home, sad and defeated. She calls John. She tells him he may be right. Superman may be turned.