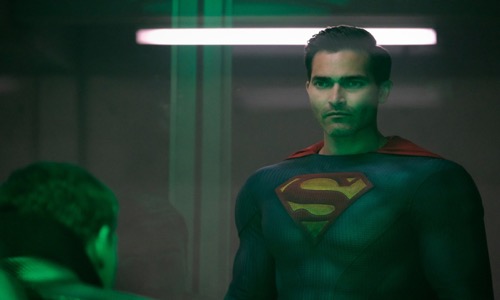 In tonight’s Superman & Lois episode, Superman questions Morgan Edge in prison. Superman wants to know where Leslie Larr is but Edge isn’t giving any info. Back at home, Clark updates the boys with what he knows. Lois keeps getting texts from Chrissy. Meanwhile, the mayor has asked Kyle to take some time off from his job given the Edge situation. The mayor promises to fix it.

At school, the boys and the rest of the school are called to an assembly. Jonathan is approached by a girl in his class he seems to have a crush on. She talks him into skipping. At the Gazette, Lois and her editor talk about the big story.

Clark and John work to track Leslie. John shares that after this job he plans to move on. Their tracking device shows Larr is headed for the DOD. Superman and John are able to stop Larr. The general discusses keeping the family safe.

Jonathan and his classmate take a cruise around town. Meanwhile, Sarah and Jordan have also skipped the assembly and are out walking in the woods. Sarah is worried about her dad.

The general tells Lois to run a story if the bare minimum. He thinks the town will go crazy. She wants to share the truth. In his cell, Edge recalls his dad threatening to extinguish his mother. Superman comes to his cell and asks once again where the eradicator is.

Lois tells her editor they need to air on the side of the causeway with their article. Her editor is mad she seems to be protecting the DOD.

Jonathan ends up cutting his day out with his classmate short after she seems to be fishing for information about the DOD and his grandfather. Meanwhile, Kyle wonders if they should move and start over. Lana is surprised and not interested. This is their home.

Sarah and Jordan hang at a creek and talk about their families and fitting in, feeling safe. They kiss, realizing right after that the police are looking at them.

Superman has a change of heart. He tells Sam there is a need for those biochemical weapons that could kill him. Sam is opposed. They hurt his family.

Jonathan heads into the barn where he finds John and his suit. He is impressed by the technology. Clark comes in and wants to know why he isn’t in school.

At home, Sarah picks up on Kyle’s bad mood. At the farm, Lois interrupts Jonathan and Clark. She is angry Clark is pushing for bioweapons. She is also angry after getting a phone call Jordan has been arrested. She tells Clark to stay behind, she needs breathing room.

At the political department, Lois sees Lana yelling at the mayor. She knew he wasn’t out to set the record straight. He just wants to win another election. Lois and Lana talk after as Lana vents.

Lois and Clark talk. They decide to give John the power to kill Superman when need be. He can be trusted. It’s the best option. After, Clark heads to talk to John while Lois brings the facts of what happened to her editor so she can write the story.

While thinking about his father and his control, Edge recalls when he did away with him. After something seems to change within him in his cell.

At the farm, Lois and Clark ground the boys for skipping school. Back at the DOD, Edge breaks free from his cell, appearing more popular than ever in the face of kryptonite. Superman shows up. It’s too late. Edge is gone, Superman tells them. High in the earth’s atmosphere, Edge attempts to become the eradicator.