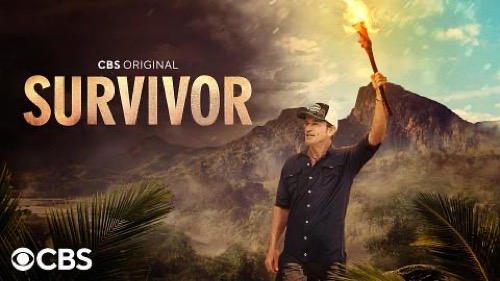 Tonight on CBS Survivor airs with an all-new Wednesday, September 22, 2021, Season 41 Episode 1 premiere and we have your Survivor recap below. On tonight’s Survivor season, 41 episodes 1 called “A New Era” as per the CBS synopsis, “Eighteen new castaways begin their battle for $1 million and the title of Sole Survivor.”

In tonight’s Survivor episode, the episode begins with Jeff Probst saying it’s been a while and he has missed the Survivor fans. This season, he is inviting fans inside the game a little more, like coconspirators. Fans will know what is happening before the players. Like the advantage, the BEWARE advantage comes with risk. The game is 26 days this season, so the castaways need to hit the ground running because it will be a Survivor at a fast pace. There will be small tribes, no rice, and penalties for losing, and you have to earn everything. But, a dangerous unexpected twist can take it away.

Evie is a Ph.D. student who is excited to play Survivor, she has studied the game and loves the game. Danny is an ex NFL player and he says that after a year and a half of quarantine your mind is going crazy. Tiffany is a teacher who says Survivor kept her going through the pandemic and she was an alternate, she was called 24 hours before going and she can’t wait to show her kids. JD is a college student who has been a fan since he could watch TV. Voce is a Neurosurgeon and has been in the front lines this past year, it’s been pretty traumatizing and he is beyond ready to play.

Shan is a pastor and she says people will think she can’t play because she is a pastor and they are soft, but she calls herself the mafia pastor. Sara is a healthcare consultant who says 2020 was the worst year of her life. Deshawn is a medical student who said Covid has made him more excited about the game. Erika is a communications manager who says she is an animal let out of the cage. Xander is an app developer who says this is what he lives and breathes for.

Three boats with the castaways arrive to meet Jeff Probst, he welcomes them to the 41st season of Survivor. He says they were lucky enough to be invited back to Fiji. Jeff says that for 20 years he has had one phrase, “come on in guys.” In the context of Survivor, is guys ok? Everyone loves “guys” and they decide to keep it. Jeff tells them that they are starting with very meager supplies; one pot, one machete, one flint. No rice, no food source, and gameplay that has never been so dangerous.

The opening challenge is for each tribe to find six paddles for their tribe, all their tribe members have to jump off the barge and get into a raft for their tribe. Luvu is the first tribe to have every on the raft, Lua is right behind them and gaining speed. Ua grabs the flint that is hanging from the barge, they win the three supplies. The other tribes have to compete again to get their essentials. Yase tribe had the most embarrassing start, they didn’t even make it off the barge and find all their paddles.

On UA Brad is a cattle rancher and is used to hard work, he starts chopping bamboo for a shelter. JD has practiced making fire, and he does it very quickly for his tribe. At Yase, they are calling themselves the underdogs. Liana knows the first challenge didn’t go well, but the only way to go is up. Once they arrive at their camp, there is another challenge for them to win their supplies, one is physical and one is mental. Luvu has found the same challenge at their camp. Both tribes choose the physical challenge, they have four hours to fill two barrels with ocean water, which is quite a distance away from the ocean and they only have two small pots to fill them.

Ricard says being on Survivor is complicated because he has a 22-month old daughter. At Luvu, Danny and Deshawn are filling the barrels with water and take a break to look for idols and Naseer catches them. He runs back and tells his tribemates. Erika says that waves red flags for them. Naseer jumps at the chance to make a final four alliance and exclude Deshawn and Danny.

At Yase, Evvie doesn’t plan on telling anyone that she is attending Harvard, she doesn’t want it to play against her. Tiffany finds out that she is being thrown under the bus and there is no way she is going to stand for that.

At Luvu a boat arrives and gives the tribe a scroll that reads, “one person must get on this boat, take a journey and make a decision they will then return to camp.” Danny volunteers because nobody else will. Yase gets the same choice, Xander gets in the boat. At Ua, they play rocks to decide and JD wins. All of the time when someone is selected for something, it puts a target on their back.

The three arrive on a beach and introduce themselves. There is a sign, “follow the path to the summit. Take this time to get to know each other.” They talk and walk high up on a mountain and say the walk is tough. JD is an athlete and he is having a hard time. At the top there is another sign, “you will now separate and make a private decision before returning to camp.”

The decision is to risk their vote or protect their vote. This is a high-risk, high reward challenge. Danny chooses to protect his vote. If the other two chose to risk, they will both get an additional vote.

At Luvu Danny returns and shares with the tribe what happened. Heather really liked the way Danny was forthcoming. At Yase, Xander tells his tribe that he risked it and if everything goes well, they will have an extra vote at the tribal council. At Ua, JD tells his story about his trip with the other two guys and says that he protected his vote. Ricard doesn’t believe him, he says it doesn’t make sense and he thinks he is lying and they should vote him out.

It is three days in and the tribes meet for a challenge. Ricard says that he doesn’t agree that Jeff should say “come in guys.” Jeff says that he loves that he thought about it more, he wants to change it as well, from now on it is “come on in.” Jeff says there is a new twist, if they go to tribal council and they fear they are in danger and don’t have an idol, he shows them the shot in the dark dice. They can use it to reach in a bag and for a one in six chance, pull out a paper for safety that night at tribal council. If they need a hail Mary, this is it. This decision happens in private, in the voting booth, but they lose their chance to vote. Nobody will know what they did until he reads the votes. There is one for everyone.

Time for the first Immunity Challenge. Today’s challenge consists of running over and under a series of obstacles until they get to the sled. They will load their sled with very heavy puzzle pieces. Two members at a time will move very heavy sandbags to clear a track so they can push the sled down the track, transfer the puzzle pieces to a crate and pull them to the top of a very tall tower. Two players have to solve the Survivor puzzle. The first tribe to finish wins.

The two losing tribes will go to the tribal council and have to forfeit their flint. They will have a chance to earn it back at the next immunity challenge. He gives them a minute to strategize, and they start. It takes a while but all the tribes are working on their puzzles. Luvu is in the first place, they fell behind but came up to gain first place. Luvu wins the first immunity challenge of Survivor 41. Yase and Ua are going to tribal council, somebody will be going home, but first, they give up their flint.

At Yase there are tears after they lost the Immunity Challenge. Liana and Tiffany want to take out Abraham, so they have their plan. Other people are thinking the other way, getting rid of Tiffany because she is a weaker player. Meanwhile, Tiffany is worried because she knows that her name is on the chopping block, so she goes to look for an idol and is it right where Jeff put it, but she misses it.

At Ua, Sara is crying she doesn’t want it to be her. Later, there is talk to get rid of JD. Ricard thinks JD should be next, but if he is not, then it will be Sara. He speaks to other tribe members and tries to get them on board with getting rid of JD. Brad is there, he says JD is on the table and so is Sara, right in front of Sara. Brad would rather get rid of a weaker player. Brad goes to speak to JD and says that the rest are throwing him under the bus. Brad is campaigning for Sara, Ricard is campaigning for JD.

The tribes arrive at Tribal Council, Jeff begins the first one for this season with Yase. He tells them to grab a torch and light it. Abraham says they have to keep the strong players on their tribe and he brings the stamina and strength. Tiffany says he only talks when it is good for his game. Voce says the idea of being shot in the dark is terrifying, if he is in danger, he is going to take it. Time to vote. Xander made a risky decision when he went for that boat ride and it earned him an extra vote. Jeff is ready to read the votes, no immunity idols are played. First vote Tiffany, Abraham, Abraham, Abraham, Abraham and he is the first tribe mate voted out of survivor 41. Abraham says he didn’t see that one coming, he was blindsided.

Next is the Ua tribe. Ricard says they have a great tribe, they are genuinely chill. JD says he told his tribe what the advantage was when he went on the boat ride, he was honest with them. Sara says when they did the puzzle they were missing one piece and it was a mistake, it could have been avoided. Shantel, Ricard, and Sara start whispering and JD gets scared. Sara says her name was called out by Brad multiple times.

Ricard goes over to JD and says vote out Brad. JD then talks to Sara and Shantel and tells them to vote out Brad. Everyone is all over the place. Sara looks worried. JD says he is hearing different things than he heard back at camp. Brad says he doesn’t understand the paranoia, he thought they were cool. Time to vote, Xander finds out that he has an extra vote and he is thrilled. No immunity idols are played, Jeff reads the votes. The first one is for Ricard, Sara, Brad, Sara, Sara, and she is voted out.