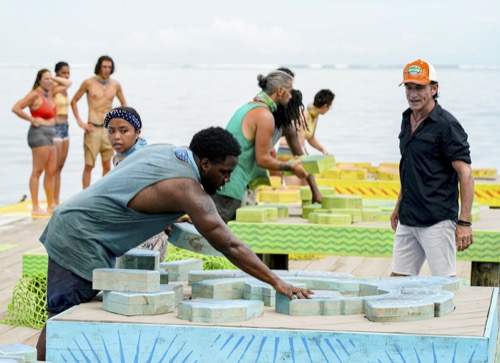 Tonight on CBS Survivor airs with an all-new Wednesday, September 29, 2021, Season 41 Episode 2 and we have your Survivor recap below. On tonight’s Survivor season, 41 episodes 2 called “Juggling Chainsaws” as per the CBS synopsis, “Immunity challenges get interesting when a new idol is introduced that has a special twist.”

Tonight’s episode begins on day four, Brad is trying to have a nap and he is thinking, he is worried about JD. He saw his name on the parchment at tribal council and doesn’t like it. He sees JD and Ricard walking together to get water, he walks the other way to eavesdrop on them. He overhears JD say that he can’t trust him, Ricard tells JD that Brad thinks that he has an idol. JD says he feels better about his position after Tribal Council. Shan sees Brad sneak off and is worried that he might do that to her. Later, Shan tells Ricard what Brad did. He calls Brad dumb because Shan is Ricard’s biggest ally.

Meanwhile, at Luvu Deshawn is starting a fire and he can’t do it for his life. Naseer can make fire, he doesn’t need flint, but he doesn’t want to show off. He grew up in a tiny village in Sri Lanka. He probably shouldn’t have shown off his skills.

Xander goes out to look for advantage and luckily finds it. It comes with a twist, if he takes it, he has to use it. He decides to go for it and it is a three-way shared immunity idol. But in order for his idol to have power, the other two idols have to be found as well. At the next immunity challenge, he must say his secret phrase, if the other two idols are found, tribemates will reply with their secret phrase. Each tribe beach has one. Until then, he cannot vote at the tribal council. This is why the advantage says beware. Xander shares his find with his two allies, Voce and Evvie who runs right to the women and tells them everything.

Time for the Immunity Challenge, Xander chants his secret phrase, but nobody else does. For this challenge, one person from each tribe has to swim out, dive down, and retrieve a key. Then two other tribe members will race against a series of obstacles, when all three are at the end, the two remaining tribe members will use that key to unlock the pieces of a puzzle that they have to solve. The first and second tribe who finishes first win immunity. First to finish wins a lot of fishing gear, second not as much, but still enough. Losers go to tribal council and Jeff will take their flint again.

YASE has been a disaster in challenges this season and no difference in this immunity challenge. The other two tribes are working on the puzzle. Meanwhile, Tiffany is sitting on a balance beam and struggling to get back in the game. YASE is back in it, they are starting their puzzle. If one of the other tribes do poorly on the puzzle, they could at least get second place. Two tribes will win, two tribes are getting fishing gear. LUVU wins immunity and the bulk of the fishing gear. UA has the lead, but YASE is trying to catch up. UA wins immunity, YASE is going back to tribal council and another tribe member will be voted out.

LUVU as the winners have some power, two people are going to leave them and make a private decision. They are going to decide who will go. They have to pick one person from YASE, they pick Evvie, and they choose whoever else, Deshawn volunteers from their tribe. The two head out on a boat.

At YASE the tribemates think they are on life support right now, and the only think they think will save them is to get rid of Tiffany. Little do the men know, the women are going to band together and blindside Xander. The women hope that Evvie doesn’t do anything stupid when she is with Deshawn. They talk game, she tells him that Xander is probably the one that is going home. She also tells him that Xander has an idol and how it works this year. They then separate and have to risk their vote or protect their vote.

Evvie is back at camp, her mission is to make sure that the guys think she is on their side. Out of nowhere, Tiffany is nervous, she wants to vote out Voce, she is afraid that Xander has an idol.

Time for tribal council. Tiffany likes to give one hundred percent, but she is having a hard time because of the lack of food. Jeff tells her that Survivor will humble her. Xander says it is real and raw. Voce says part of the experience is super humbling. In surgery, he can’t make mistakes. And, he thinks his tribe is on life support and they have to figure out where the bleeding is coming from and fix it. Time to vote.