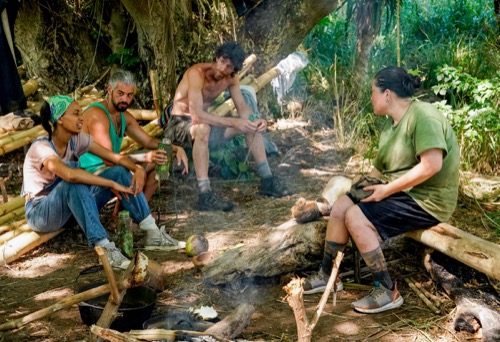 Tonight on CBS Survivor airs with an all-new Wednesday, October 6, 2021, Season 41 Episode 3 and we have your Survivor recap below. On tonight’s Survivor season, 41 episodes 3 called “My Million Dollar Mistake” as per the CBS synopsis, “Castaways stumble upon a sneaky advantage that comes at great risk. Also, truth is tested amongst castaways as mistakes are made.”

Tonight’s episode begins with Tiffany, and she finds an advantage right near the fire. Unfortunately, she found it in front of some of her castmates and had no choice but to share it with her. Meanwhile, over at UA, Brad wakes up and starts chores while everyone else is down at the beach. Brad is the next one to find the same advantage, “tonight a boat will arrive, you must sneak out of camp and get on the boat. You will be taken to another island where you must make a decision. You will then return to camp. Failure to get on the boat will result in the loss of your vote at the next tribal council.” Brad is psyched, and he found the advantage alone, so nobody else knows about it. At Luvu, Nasir wants to get out Danny, then Deshawn. Sadly for him, he is discussing it with Sydney and she is playing both sides, so he is in trouble. Nasir decides to confront the group, and they want to get rid of him because he is so neurotic. Sydney sees the package, she quietly sneaks over and takes it. She is scared, the beware at the top of the note worries her. This is a very dangerous season of Survivor and she thinks she put herself in a very dangerous situation.

JD has looked everywhere for an idol and can’t find anything. He is thinking maybe it is so hard to find because someone already found it. Brad’s luck is still shining, he found the three-way share immunity idol, Genie was with him and she is happy because he is her closest ally. At the next immunity challenge, he has to say the secret phrase. Brad shares with Shan that he found both advantages, he tells her that they just fall out of the sky. He tells her about the boat that he has to go on. She has to figure out what she is going to do, does she keep Brad with all that power. Brad builds a body in his bed, rolls off in the fark, and leaves. The three arrive on the other island, it is dark, but the island has a hut and is all lit up. Brad introduces himself to the women. They must choose between two advantages, a tarp tribe advantage, or steal a vote. The tarp is good to keep them dry because when you are wet you are miserable. Brad wants the steal a vote. If all players choose a tarp, all players receive a tarp. If all players choose to steal a vote, all players lose their next vote at the next tribal council. If there is a split decision, the tarp chooser gets nothing, the steal a vote gets the vote. They can discuss it, but they have to vote separately. They have to act quickly because the longer they are gone the more they risk being caught. There is no time for small talk. Tiffany is playing hard and Sydney doesn’t like it. Brad doesn’t plan on playing it safe, he goes for steal a vote. Tiffany is choosing and says she is not sure she likes Sydney’s energy.

Time for the Immunity Challenge. For today’s challenge, one at a time they are going to swim out and cross a rope bridge over water. When everyone gets to the end they will dig up a sack of sandbags and attempt to land those sandbags on a series of targets. The first two tribes to finish win immunity and fruit. First to finish get the large tray, second gets the smaller tray. Loser goes to tribal council and gives up their flint.

Seven days are taking their toll on how fast everyone is moving, although Nasir and Ricard were pretty quick. Tiffany is fighting over the tight rope bridge, she almost drops but hangs on. As usual, YASA is in third place, but never giving up and still fighting. It is still anyone’s game.

LUVU wins immunity, YASA comes in second (their first victory) sending UA to tribal council. Back at camp, Brad is already working his angle for the tribal council. JD gets up to use the bathroom after a while he comes back and he has a piece of paper out of his pocket, he found an advantage, “you made a risky decision and it worked. You earned an extra vote. The last time you can use this is when there are six players left in the game.” Ricard wants to get rid of either Brad or JD, he doesn’t trust either because they are sneaky. Shan tells Ricard that she doesn’t know who to vote for. JD is worried that he lost trust with Ricard and Shan because he found the extra vote. He gives his extra vote to Shan to hold, to show his loyalty to her. Now Shan thinks he is in her pocket, she is the deciding factor on who is going to go home tonight. And, she is an emotional player, so this is tough for her.

At Tribal Council JD says he was bullied a lot when he was younger and Survivor got him through, it made him who he is and that is why he is so confident. And, even if it gets cut short, at least he got to do it. Time to vote. No idols are played. First vote for Brad, second for JD, third for Brad, and fourth for Brad. The fourth person voted out is Brad with all his advantages in his pocket.