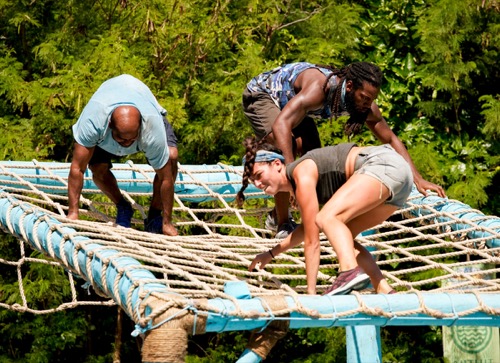 Tonight on CBS Survivor airs with an all-new Wednesday, October 20, 2021, Season 41 Episode 5 and we have your Survivor recap below. On tonight’s Survivor season, 41 episodes 5 called “The Strategist or the Loyalist” as per the CBS synopsis, “Two castaways strategize a risky move during the immunity challenge, and another castaway does what it takes to earn a tribemate’s trust.”

Tonight Survivor episode begins with Genie, she feels solid after tribal council. She is out looking for an idol and she finds one. Shan says to leave the idol, she doesn’t want anyone to have more power then her. When Genie is swimming, Shan and Ricard talk about the idol, they sneak out to go take a peak and see what kind of idol it is. They open it and it is the same three-way idol. She gives Ricard her extra vote. Ricard and Shan are a solid duo and they are treating Genie like a spare tire.

At Luvu Sydney goes swimming and dives to get fish for the tribe. Danny is worried, you look at the other tribes and the men are getting voted out, he is afraid the women are going to have power in this game. Naseer feels good in his game, they men are including him in conversations.

Tiffany thinks Evvie’s alliance with Xander is really strong and she doesn’t trust it. Later, Xander tells Tiffany that he found an idol, the tree-way one. He is at the mercy of his tribe mates, he has not vote for now. Tiffany can’t believe that Xander is telling him this, first he tells her that he just found the idol. Then he tells her the truth and lets her know It has been some time since he found it. She knew it had been awhile because she remember him chanting that phrase about butterfies.

It is day 11 and Jeff says it is the hottest day in Fiji. It is time for the immunity challenge. All three tribes chant their phrase for the three-way idol, Naseer is the last to chant it and he can’t be happier that his idol is now activated. For today’s challenge they are going to go up and over a net ramp, release a key, unlock a machete, use that machete to drop sand bags. They will then use the sand bags and fire them at two targets. First two tribes to finish win. First tribe to finish wins a giant tarp, second place a smaller tarp. The losers go to tribal council and lose their flint.

This is the type of challenge where they have to work together. YASE wins fist place, LUVU second and UA is going to tribal council. Jeff tells YASE they are going to send two people on a journey, they will make a decision, pick somebody from the losing tribe UA. Shan is going on the journey. Liana is going from YASE. Shan is worried being away from her tribe, she hopes she doesn’t get blindsided.

Shan is happy that it is two people of color on this journey, she feels like she has an ally in this game now. They form an alliance and Shan tells her that Ricard cannot be trusted. The two have to sperate and make a private decision before they head back to camp. They two hug each, having bonded on their journey. Liana risk her vote and gets the knowledge of power advantage. She can basically ask the right person the right question at tribal and steal someone’s advantage.

Ricard is working with Genie to have her work with him to vote out Shan, but he is actually working with Shan and plans on taking out Genie. Shan is back in camp, Genie tells her that Ricard is coming after her and she believes it. She asks Ricard to get back her extra vote that she got from JD, she wants insurance at tribal council.

Time for tribal council, Genie tries to make a pitch for either Ricard or Shan to keep her. Ricard says he has to decide who he wants to keep, the honest person or the closer. Shan says she is worried about having left the tribe all day and she doesn’t know if she is in the driver’s seat tonight. Jeff says they can vote any time. Ricard says he is typically calm but his heart is racing tonight. Shan thinks the shot in the dark is the hail mary kind of pass but you want to save that when you are desperate. She says tonight is about who can you trust to the end. Time to vote.

Jeff tallies the votes, nobody plays an idol. The first vote is for Genie, the second is for Ricard. One vote left and it is for Genie, she is eliminated from the Survivor.