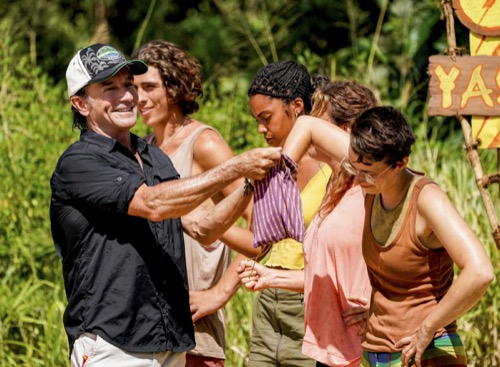 Tonight on CBS Survivor airs with an all-new Wednesday, October 27, 2021, Season 41 Episode 6 and we have your Survivor recap below. On tonight’s Survivor season, 41 episodes 5 called “Ready To Play Like A Lion” as per the CBS synopsis, “Now that the three tribes have merged, their alliances are tested; there’s a new twist when it comes to the merge.”

Tonight Survivor episode begins with Ricard, the extra vote has become a problem for him and Shan and he now doesn’t trust her anymore. Ever since Shan got the extra vote she has become very attached to it, she has two advantages in this game and it is not sitting well with him. He just lets it go and moves on, but the rest of this game, he has to do what is best for him.

It is time for the merge, the teams are excited. Xander thinks things are set up perfect for that. That have gotten to be a really close four on his tribe and they are solid. Liana knows the three women have an alliance and lets Xander thing he is part of their alliance.

At Luvu, everyone is thriller at the thought of a merge. Sydney says their problem is that they have never been to tribal council, that can be a negative.

When they get to the end they will climb to the top of a tower, use those keys to unlock a word puzzle. First team to finish earns their first proper meal in twelve days, plus the merge buff and they will not have to participate in the first immunity challenge, they will be safe. The losing team, no proper meal, no buff and they will have to participate in that challenge. One more layer, two players will draw grey rocks, they will not participate in either team, their fate will be decided by the winning team. Jeff has everyone choose a rock, Naseer and Erica are the ones who chose the rock that determines their fate.

The teams are divided into two, yellow and blue and they struggle, with the lack of food and the heat, to complete this challenge. The blue team is further ahead, but the yellow team is close behind them. Blue team wins the first meal of the season. Danny, Evan, Ricard, Deshawn, Sydney, a boat is going to take them to sanctuary where they are going to have a proper meal.

They have to choose to have Naseer or Erika join them. Big decision, because the other person will be taken to another island for two days and two nights, no meal, no shelter, no company. Once person gets a gift and one person gets sent away. Their thought process was rock, paper, scissors. The person joining them is Naseer.

Xander, Liana, Tiffany, Shan and Heather they will have a little bit of rice waiting for them back at camp. Erika is left, she is the one who has to head to the island alone.

Winning the challenge is huge the feast includes beer and tons of food. At Exile island, Erika is dropped off on her own. He thing that she didn’t want to happen on Survivor is happening, times two. She gets rice and water left for her when she arrives. She doesn’t have a lot of skills, but she tries to gather some wood to make a fire and she does it on her own.

Meanwhile, Shan start talking to Tiffany eight away about the advantage that she has. Liana tells Shan about her advantage, the knowledge of power. Tiffany feels that she is a bit on the outs when Liana and Shan take off together.

Shan makes an alliance with Liana, Danny and Deshawn, she choose everyone because they are people of color and can relate to each other.

Jeff shows up at Erika’s camp, she tells him that working on her fire kept her sane. He tells her this game can take her on some wild journeys. She says she feels left behind, having to be alone for two days during an important time, she has so much catch up today. He tells her that she has tremendous power. He gives her an hour glass, the black sand represents the time that has already passed. If she wants she can leave the game in its natural state, or she can go back in time and change history.

Those who have immunity would have it stripped from them and she and the other five would be safe. If she wants to do nothing, leave it how it is. If she wants to change history, smash the hourglass. She has until tomorrow before she leaves to make her decision.