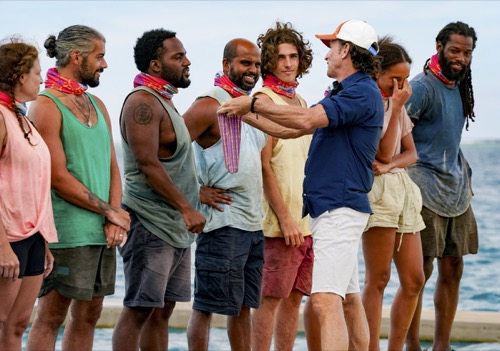 Tonight on CBS Survivor airs with an all-new Wednesday, November 10, 2021, Season 41 Episode 8 and we have your Survivor recap below. On tonight’s Survivor season, 41 episodes 8 called “Betraydar” as per the CBS synopsis, “The castaways must work to make amends after betrayals; an interesting turn of events takes place at the reward challenge.”

Tonight Survivor’s episode begins with Evvie, she knows she was one vote away from going home. She knows she was playing too hard and needs to slow things down. At this point, she thinks Yasa is done. Meanwhile, Tiffany is planning on using whoever whenever so she can make it further in the game. The former Yasa tribe tells Deshawn that they want to work with him and there is no way he will consider it after they wrote his name down. He says they can leave Survivor one by one and he will be happy about it.

Time for the Reward Challenge where they will be randomly divided into two teams of five. One player will not participate and have one shot at the reward. On Jeff’s go, they are going to leap off of a ramp, dive down to release puzzle pieces, and put them in a boat. Once they have all their puzzle pieces and all their team, they will pull themselves to the finish where two players will use those puzzle pieces to solve a pyramid puzzle.

They are playing for grilled cheese back at camp. They pull tokens from a bag to choose who will not participate and which team they will be on. Erika pulls the rock for the person who will not participate. Xander offers his spot to Erika so she can have an opportunity to win and have something to eat. Little does Xander know that there is an advantage under the bench where he is sitting and waiting out the challenge, sadly he doesn’t look for it and the opportunity is missed.

Back at camp, the ones that don’t get the cheese get a papaya thanks to Naseer. Ricard had grilled cheese and takes a piece of papaya as well. Ricard doesn’t see a problem with him trying the papaya, it is tribe food and his reward should affect him having any.

The Immunity Challenge is next, it is day 16 and this is a physical challenge. Ricard gives back his immunity idol, it is back up for grabs. For today’s challenge, they are going to balance on their toes with a block of wood wedged between their head and the top of a frame. When their legs get tired, they will get tired and the block will wall, and they will be out of the challenge.

There are two options, if any individual player feels they are safe enough in the game or doesn’t feel they can win this challenge, they can opt-out for a single portion of rice. If as a group, they want to offer up multiple people, give up their chance at immunity, they will get enough rice for everybody for three days.

Jeff is offering up the rice, the tribe has to make the group offer. Shan, Xander, Naseer, and Ricard offer to sit out of the challenge so the group gets rice for three days, Jeff takes the offer. Everyone else gets ready for the challenge. It does not take long to come down to two people, Evvie and Heather, Evvie wins.

Back at camp, Shan’s goal is to flush Xander’s idol so they are going to put up Xander and Tiffany. Then there is a change of heart, Tiffany and Naseer’s names get thrown out and Shan is against it. Deshawn gets annoyed that Shan doesn’t want to write down Naseer’s name, he says maybe they should write her name down then.

At Tribal Council, the four that opted not to play to give rice to the group say they did it just so they could eat, it wasn’t strategic. Evvie says she knows their plans afoot but nobody told her who to vote for tonight, she is not involved. Once again, the whispers start, Heather is the first up, she is trying to change whatever vote they planned on before they got there. Deshawn and Shan start arguing, he says he is not going to have her tell him what to do and she says she is not going to treat him like a baby. Time to vote, Ricard is up first.