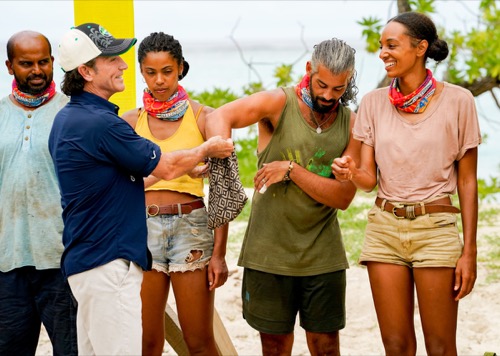 Tonight on CBS Survivor airs with an all-new Wednesday, November 17, 2021, Season 41 Episode 9 and we have your Survivor recap below. On tonight’s Survivor season, 41 episodes 9 called “Who’s Who in the Zoo” as per the CBS synopsis, “A castaway is singled out for a dishonest game; immunity and reward are on the line.”

Tonight’s Survivor episode begins with Deshawn saying that tribal council was a train wreck because of Heather, and Shan is starting to step on his toes and it is not making him happy.

At Viakana it is day 17 and the whole tribe is watching the sun go down by the beach. Shan is sitting near Deshawn, they make up and she tell shim that she thinks Heather and Erika are dangerous, but more so Erika because she is a mastermind.

Ricard is hard of hearing and sometimes it is scary in the game, he is surprised that he is thriving, but he is reading body language and lips. So, he is thinking that maybe he could be the first hard of hearing winner.

Time for the Immunity Challenge, for today’s challenge they are going to balance on a very narrow perch with their hands holding on to a handle behind their head. If at any point a hand comes off the handle or a foot comes off the perch, they are out. To make it more interesting, today they are going to be divided in two groups. Two people will win immunity. Both groups will go to tribal council separately and vote someone out. Two winners and to people will be sent home. In addition, playing for reward. The last person left standing in the challenge not only wins immunity for themselves but they earn chicken and beef stew to be enjoyed back at camp for their group.

Erika, Shan, Ricard, Naseer and Heather competing against Dehsawn, Evvie, Liana, Xander and Danny. One person from each group will be going home. This is about pain management because it is going to hurt.

Evvie is the first to drop out, Heather next followed by Liana and Shan. Naseer is out, Erika wins for her team, but can’t hold on any longer. Others fall and it came down to Deshawn and Xander, Xander wins immunity and reward for his group.

Xander is thrilled, he has power and wants to take out some of the big players. Evvie goes to speak to Xander and tells him that she is ready to do whatever he wants. Xander is pulling towards Liana, she is Shan’s minion and very dangerous in the game. Beside, Liana is gunning for Xander. Meanwhile, the other side of the tribe is going to vote for Evvie. Liana goes to see Xander and tells him that she wants him to give her is idol, not to use, but to hold, to prove his loyalty to her. Xander thinks it is hilarious. Meanwhile, Shan says Erika winning is bad for her game because she wanted her out.

Naseer tells Heather he is sorry but she is going to be voted out. Erika asks him to use his idol on Heather and he says no way, he has to take care of himself, just in case. This is a heartbreaker for Erika, she is close to Heather. Erika would love to get rid of Naseer, or Shan.

Xander tells Deshawn that Liana threw his name out for eviction. Xander says he is voting for Liana. Meanwhile, Ricard thinks he is running the fame and he is pulling for everyone to vote out Naseer. Shan is against it, she wants heather gone. Ricard says he has the most high maintenance alliance ever.

The first Tribal Council begins; Heather, Shan, Naseer, Erika and Ricard. Shan says it seems that there is an obvious vote tonight. Ricard says it is a complicated season, in this five, there are three that have advantages. Heather says it is a hard day. Naseer says he respects Heather and he is sorry that she is about to leave. Heather puts on an incredible act of being upset, but the plan is to get rid of Naseer. Time to vote. Jeff counts the votes, nobody plays an advantage. The first vote is for Heather, then Naseer, Heather, Heather, Naseer.

One vote left, Naseer. It is a tie, Naseer is blindsided. Jeff says they are going to revote for who they want to leave, Heather and Naser won’t be voting. Time to read the votes again, Naseer, Naseer, Naseer. The rest head back to camp.

The next groups walks in; Danny, Liana, Xander Evvie, Deshawn. Everyone is confident that they know what is going to happen during the vote except Deshawn. He says seeing Naseer sitting there, you never know what is going to happen and that proves. Time to vote. Jeff tallies the votes; Liana, Evvie, Liana, Evvie, Evvie. Evvie is third member of the jury and voted out.