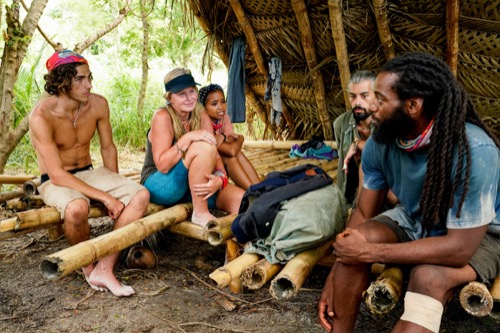 Tonight on CBS Survivor airs with an all-new Wednesday, December 1, 2021, Season 41 Episode 11 and we have your Survivor recap below. On tonight’s Survivor season, 41 episodes 11 called “Do or Die” as per the CBS synopsis, “Another big twist threatens to send someone home; castaways must decide whether to vote out the big threat or keep playing the game with people they trust.”

After the last tribal council, Liana found herself blindsided. She couldn’t believe her allies let her down. She met up with them afterwards to ask what happened and why they voted the way they did and they said someone took over the alliances. But what they failed to mention was that they didn’t warn her in time. They were all set to be the final four when they heard what someone else was doing and they failed to warn Liana. Deshawn was also upset. He hated that Shan called him a snake before she left. He said it wasn’t fair because Ricard did the same thing as him and yet no one called Ricard a snake and so Deshawn tried to change the public perception about himself. He started speaking to people. He tried to get them to trust him again and no one was biting. They all knew they couldn’t trust him. And Liana for one now knows she has to work against him.

Liana admitted in her confessional that she wants to take out Deshawn the moment she could. Deshawn thought he could win people back and unfortunately he was off his game. Someone else who was off tonight was Danny. Danny experienced the twenty-fifth anniversary of his father’s passing. Danny felt a lot of anger towards his late father for many years. But now that he’s older he realized how much he misses his father as well and so he finally able to say goodbye to his father in a healthy fashion. Others thought he would be a little too preoccupied by time the next Immunity Challenge came around and they were wrong. The Immunity Challenge tonight was optional. The first person that failed to balance on a ball on a cylinder would be out and they would be forced to play a new game called “Do or Die”.

Do or Die was a game of chance. If they failed to pass the game of chance, the contestant would automatically be eliminated and nothing could save them. Not immunity. Not even an Idol. They would just get sent home and so a few people chose not to play the Immunity Challenge. Deshawn was one of the people who chose to play and unfortunately he was the first out. Thereby making him the first person to play Do or Die. The person who won the Immunity Challenge was Danny. This was the first win for him and so making peace with his father’s passing after so many years helped him to focus on the prize. Danny was safe. Deshawn was not. He still had to play the new game and if he won then he would be safe from elimination.

Not even the other voting for him would be able to eliminate him if he won the new game. Deshawn was the biggest target there and with the possibility of him being safe – the others started coming up with another name to eliminate. Some wanted to eliminate Ricard. He has the best game there and everyone knew it. They also knew there was a very real chance of him winning it all. Its why they wanted to get rid of him and its why Erika became so popular. She was the swing vote. She could stick with her alliance and keep Ricard or she could join the others in eliminating him because now would be her only chance. Erika heard from both sides. She was still considering what to do when Deshawn got called to play Do or Die.

Everyone wants a guaranteed spot in the final six. But this new game was scary in the sense that nothing could save them if they died in the game and so Deshawn was being forced to take a huge risk. Everyone was watching him because they had to know which play to enact if he failed or passed. Before he played, Deshawn made one last effort to change public perception of him. He reiterated that he’s not an aggressive person and how he’s sorry if he came across that way when he was talking to Ricard. He also apologized for turning against Shan. He never wanted to do it. He just had to play the game and he was sorry about turning against the alliance. The alliance would have made sure that the final four were all black. And that was thrown aside just to score a point that was completely unnecessary.

Deshawn spoke about what it means to be black in the game. Liana and Danny also spoke up to mention their struggles with it as well and how they were just representing themselves. They were representing a culture. Deshawn played the game of chance and he somehow managed to win. He was safe from elimination. And that meant the others had to vote, but the voting ultimately eliminated Liana.

Erika stuck with her allies and they kept the majority.