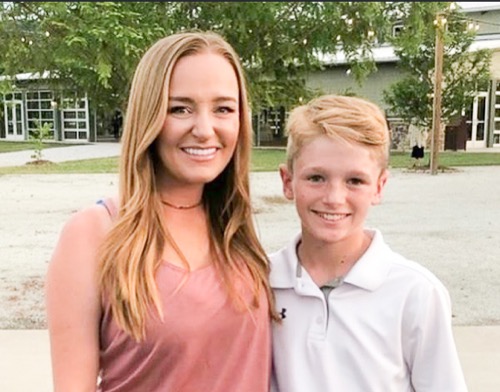 Tonight on MTV Teen Mom OG returns with an all-new Tuesday, February 16, 2021, episode and we have your Teen Mom recap below. On tonight’s Teen Mom OG Season 9 episode 4 as per the MTV synopsis, “Maci helps Bentley decide if he should go to his brother Jagger’s birthday since Ryan will be there; Catelynn and Tyler work on disciplining Nova; Amber makes a decision about living on Gary’s property.”

The stress of kids was getting to Catelynn and her husband Tyler. Their daughter Nova is going through a stage where she’s being a big brat and she’s doing this because she wants to test the boundaries. She wants to see how far she can push her parents. Her parents were raised in an entirely different manner and the one thing they told themselves going into parenthood was that they didn’t want to be like their own parents. They wanted to put their children. They wanted their children to have everything and unfortunately, they were dealing with the repercussions of that with Nova’s behavior. She now expects her parents to get a toy whenever she goes out with them. She doesn’t want to eat dinner.

Nova wants to go play or eat something with sugar in it and she blatantly tells her parents she doesn’t want to talk to them. Neither Tyler nor Catelynn were able to do that with their own parents at that age. They were both too busy being the adult in that parent/child relationship to ever truly enjoy childhood and so they were at a loss about what to do with their own daughter now. They want Nova to be able to express herself. They want her to be honest. They just don’t want her to be rude about it or to act like a spoiled brat. Nova gets away with too much. Catelynn and Tyler know they’re letting her get away with too much and they just don’t know how to fix the problem because any suggestion they might think of tends to sound a bit too much like what their own parents would do.

Maci didn’t have their problem with her son Bentley. Bentley is a smart kid and he communicates very well with his parents. The kid told his father that he wants them to do counseling because he thinks their relationship needs it. Bentley was already seeing someone and he wanted his father to join him because there were some reservations in their relationship. The kid doesn’t exactly trust his father. He’s at an age where he sees things that he doesn’t like and is able to vocalize his problems with them. Bentley doesn’t think his current relationship with his father is healthy. He thinks they need help and so he was the one who suggested counseling, but Ryan doesn’t think his son is behind this request. He thinks it’s his ex Maci.

Maci and Ryan have had issues in the past. They’ve argued about Bentley and how much Ryan is involved in his son’s life. They’ve also argued about Ryan’s little problem. The same problem that had him almost crash his car not that long ago and so there’s a reason why Maci doesn’t trust Ryan. Only it was odd that he doesn’t trust her. He should at least know that she would put their son first because she’s basically had to raise by herself for a while and so Ryan is just mad about having to go to counseling. He doesn’t want to do it. He thinks it’s some plot of Maci’s and that she was out to get him by ruining his relationship with his son. Ryan doesn’t see how he’s the problem or asks himself why does his son need a safe place to speak to him.

Amber’s relationship with her daughter’s father was actually pretty great considering all the things they’ve been through. She was once guilty of beating Gary up and emotionally and physically abusing him, but she went to therapy and she found some tools to help with the anger management. Now, she’s doing better. She’s living in an area that was rife with Covid-19 and Gary and his wife was worried about her. They suggested she move into a modular home on their property where she could ride the pandemic. It was a good idea. It has plenty of benefits. She would be closer to her daughter Leah and everyone who cares about her will know that she’s safe. And Amber later saw some of the models for the modular home.

The modular homes weren’t too bad. Amber seemed to like them. She also acknowledged how big this was for Gary because he didn’t have to offer her a place to stay and, to be honest, not all exes were that nice. Gary is a good guy. He’s doing this in spite of how things ended between him and Amber and it’s sweet that he still looks out for her. Amber and Gary’s relationship has never been better. They co-parent their daughter and they treated each other as friends. In fact, they get along so well that it’s part of the reason why Amber was hesitating about moving. She doesn’t want to risk ruining their relationship with either him or their daughter. Amber was sacred it would shift their relationship if she was suddenly paying rent to Gary and was dependent on his goodwill.

Amber spoke to her brother. Her brother is someone who knew her the best and he told her not to move. He thought she and Gary would fight more. Amber was thinking the same thing and so she later turned down Gary’s offer. She thanked him for making the offer in the first place. Then she told him that she couldn’t move in because it wouldn’t make the best sense and he understood. Gary started thinking about it after he made the offer. He realized that there might have been more fights with her living so close to his family. He also didn’t want to stress his own wife because she was easygoing and fights didn’t come naturally to her. It would just stress her out. She also wouldn’t say anything even if she did feel uncomfortable because she wouldn’t want anyone else to feel uncomfortable.

Cheyenne was another one who had a good relationship with her ex. She and her ex-Cory co-parent their daughter Ryder and so they inform each other when they bring other people into their daughter’s lives. However, Cheyenne didn’t immediately tell Cory about Zach. Zach was another ex of hers and she decided to date him again. The two are now together. He comes over to her house and he’s around her daughter Ryder. Ryder really likes him. She always brings him up because she couldn’t wait to see him and she accidentally brought him in a phone call from her dad. Her dad Cory was off filming “The Challenge”. He isn’t allowed a lot of calls back home and so this latest phone call was rare.

Cory had wanted to know how Ryder was doing. He asked her about herself and she brought up Zach. She mentioned Zach’s name like five times before she realized she wasn’t supposed to say it. Ryder knew enough to lie when her dad asked her if mommy goes over to Zach’s house. The little girl tried to claim no and her mother said it was okay because she does go over to Zach’s place. Cheyenne came clean about her relationship. She was back with Zach and they were happy. He was committed to her. He told her family he wants to commit to her and he even showed up at her sister’s birthday party because Cheyenne wanted to include him in family events. And so it’s a good thing Ryder ended up telling her dad about Zach because Zach was very clearly a part of their lives now.

Mackenzie wasn’t supposed to be moving. She and her family were all set to leave when she found out her father was going to have quadruple bypass surgery and she chose to stay in town. She and her family are close. They all grieved together when her mother passed and Mackenzie didn’t want to be out of town if something were to happen to her dad. She wanted to be nearby just in case his surgery took a wrong turn or if it wasn’t enough. Her father doesn’t really eat right. He’s been especially lapsing since his wife died and so the family came together to be there for him. They were there at the hospital as he went through six hours of surgery. They were also there as he began his rough recovery.

Later Maci’s son Bentley was tricked into attending his brother’s birthday party because his grandparents lied to him about it being at their house when in actuality it was going to be at Ryan’s house.

And Catelynn got her daughter to do chores by convincing her that she could afford a fake snake if she saves up money from her chore work.