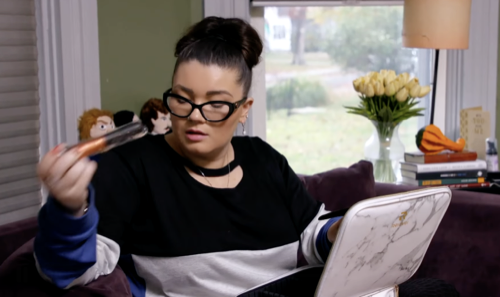 Tonight on MTV Teen Mom OG returns with an all-new Tuesday, March 30, 2021, episode and we have your Teen Mom recap below. On tonight’s Teen Mom OG Season 9 episode 10 called, “Half-Wounded Parent,” as per the MTV synopsis, “As Maci copes with the aftermath of the shooting, Cheyenne uses her platform to discuss racial injustice.

Mackenzie’s friends come to visit her in Florida and question her rekindled marriage. Catelynn and Tyler get news that his sister has relapsed”

In tonight’s Teen Mom episode, Maci is going to need some extra help. She isn’t recovering very well. She was a witness/almost victim to a shooting at a gas station and she had genuinely feared for her life during the incident. She hadn’t known what was going on. She just heard the gunshots and she did her best to hide. She hid in the bathroom until the police officers at the scene told her it was safe.

However, she had needed her husband by her side and she didn’t film for days afterward. Maci is now having dreams she wasn’t sure were nightmares or not and they tended to be about guns. She told her husband about them. He suggested that she see someone and she might do just that. Maci clearly needs help. She needs someone to help her navigate her feelings right now and therapy can do that.

Talking can also help. Amber and her daughter Leah have been struggling lately because Leah has developed issues with her mom and she doesn’t think she can talk to her. She more talks to her father about it. Gary was a good guy. He was a good dad because he was there if Leah needed him and he was a great ex because he defended Amber to Leah.

Leah’s stepmother said the same. She called herself “the bonus mom” and she reminded Leah that Amber is her mother. Amber loves her daughter. She does try to be there for her and this recent fight with her daughter only happened after she had to cancel one of their days together. Leah is holding this one encounter to say that Amber constantly does this to her and abandons her and that isn’t fair. Leah doesn’t know the full picture.

Catelynn and Tyler were also going through something as well. They haven’t heard from his sister Amber in a while and so they spoke with Tyler to ask her about Amber. She told them that Amber fell off the wagon. Tyler’s sister is an alcoholic. She takes after their father in being an addict and it’s caused issues with her child. Amber had gotten clean. She was clean for a while and now she’s “easing” back into drinking and that’s a problem. It’s a problem for her.

It’s also a problem for her kids. Tyler understands that because he and Amber lived through this. They were once kids with an addicted parent and they couldn’t understand why their father couldn’t love them enough to spend time with them. Their father chose drugs over them and now Amber is doing the same.

Only conversations were different in Cheyenne’s household. She didn’t have to worry about fraught relationships between the parent and child because her first concern was raising black children in a country where black kids aren’t safe and where often the danger they needed to discuss was the police.

Cheyenne is pregnant right now. She doesn’t know if she’ll have another girl or if she’ll have a boy this time and so right now is a scary time for her. She’s black. Some will say she’s only half-black though, when it comes to the danger, the only relevant side anyone is going to talk about is her blackness. There’ll never be someone who says she’s half-white if she gets wrongly profiled. Cheyenne has to deal with race and it’s in every conversation.

It’s even in a conversation about toys. Cheyenne said her daughter Ryder likes to play with dolls and most of her dolls are white. It, therefore, becomes harder with giving her daughter a black doll because she automatically believes that the white doll is prettier. There are also more serious conversations about toys. Little black boys and girls don’t get to play with toy guns or bb guns. Tamir Rice was playing with a toy gun when a police officer saw him and thought it was real. He was killed.

Nothing happened to his killer and the injustices continue to pile on. That’s why Cheyenne feels motivated to do something about the Black Lives Matter movement. She and her family want to know how to become better allies and they’ve talked with people in the movement to find what else they can do.

Mackenzie has been having plenty of conversations with her family. The conversation is always about Josh and where he and Mackenzie stand. Mackenzie had thought her marriage was over. Josh was trash-talking her all summer and so she and her friends and family were doing the same to him. They all agreed she was better off without Josh. Then Josh went to Florida. He showed Mackenzie another side to him and he’s been there for her.

He’s been the old Josh she fell in love with. Mackenzie and Josh were happy in Florida. He returned home, but that was only for a work thing and he’s planning on coming back. Mackenzie was happy about that until she spoke with her loved ones. They were the ones telling her that she shouldn’t forgive Josh and no one was happy he was down with her.

Mackenzie’s family and friends have seen this back and forth before. Mackenzie will work for a while until Josh does something he isn’t supposed to and Mackenzie will be forced into kicking him out again. He even did commit to this pattern as her mother was dying. Josh is never going to truly change and so no one was on board with him being back in the picture.

Amber also wasn’t going to change. She missed the family celebration for Leah’s birthday because she had wanted to do something with just the two of them and so she was left angry when Leah shot that down. Leah wasn’t ready to spend one on one with her mother. It would have made more sense if Amber had just shown up when Leah needed her and not when it was convenient for Amber. Amber is also blaming Gary and Kristina for Leah rejecting her and they’ve been her two biggest advocates.