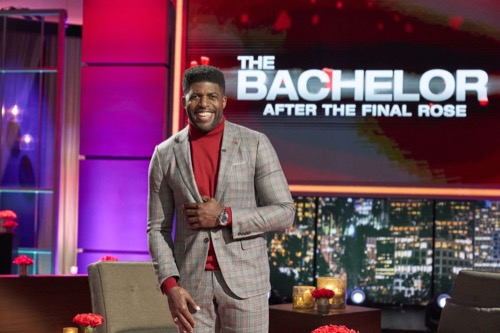 Plus –just when you thought the twists and turns were finished – a shocking announcement that will have Bachelor Nation talking.”

We will be liveblogging tonight’s episode of The Bachelor Matt James and you just know there is going to be tons of drama, catfights, and tears. So come back tonight between 10 PM – 11 PM for our live The Bachelor recap. While you wait for our recap make sure to check out all our The The Bachelor photos, spoilers, news & more, right here!

Tonight’s The Bachelor After The Final Rose recap begins now – Refresh Page often to get the most current updates!

In tonight’s The Bachelor After The Final Rose episode, it is time for After The Final Rose, and Emmanuel Acho is stepping in for Chris Harrison tonight which already makes this the most shocking After The Final Rose. Emmanuel’s first guest is Michelle. He asks her what is going through her head. She says she didn’t want to be sitting there with the ending that she had, but now she is ready to confront it.

She says it was hard to experience back then and harder to watch it back. She admits that she didn’t get the closure that she wanted and afterward, she wasn’t ok. She asked if she could talk to Matt for two minutes, not to change his mind, just so she could say her peace and he refused to have that conversation with her. She still believes she deserved her two minutes to help her move on.

They talk about Rachael and the controversy around the Antebellum photos. Michelle says as more and more information began to come out, she started to feel hurt by what she was seeing. It is a prime example of not understanding what her actions meant and how they see it. She thinks Rachael has a good heart. He asks her thoughts about Chris H. and his reaction. She says it was another difficult week. Emmanuel says they can’t resolve everything, but he is going to give her the time to speak to Matt.

Michelle says she is ready to meet Matt again. He comes onto the stage and he hugs her, then sits down. She asks him how he is. He says it has been a rough past few months and he is still processing everything and to see how he feels. She says this is hard to sit in front of him, watching that entire night and everything that that was. He said that he needed time to sort things out and he left. She completely crumbled, she had to walk away without closure and fill in the gaps of what their relationship really was.

And, producers were in her room seeing how bad she was hurting. And, she asked him for a conversation so she could have her inner peace and he said no. He says he is sorry, and if he had known this was how she was feeling, he would have spoken to her. He tells her that she was a breath of fresh air and he hopes that she knows that he really did care about her. His respect and admiration for her is out the roof and if he could do things all over again, he would have had that conversation. She says she still cares about him and she is a forgiving person. She is not in love, but it helps to know his feelings were real for her. She tells him that he taught her a lot about relationships, what she is looking for and not looking for and he will always hold a piece of her heart.

Emmanuel asks Matt how much pressure it was to be the first black bachelor. Matt says there was a lot of pressure, the way he acted and carried himself is going to be people’s opinions on how a black man moves. He took on all the weight of everything that was going on in the country at that time frame regarding social justice. Everything going on in the franchise regarding diversity, inclusion. That is the pressure that he felt and that his presence represented. He goes on to say he is conditioned to make people feel comfortable with his blackness so that in stature and personality you are not as threatening that you come off as.

Matt doesn’t regret the experience, he got to know a lot about himself. It was the first time he wasn’t afraid to cry. He connected to Rachael because of her authenticity. She shared with him the qualities that he wanted in his person. After they left the show it was great, it started as you would imagine, like a honeymoon. Matt says that while all the controversy is swirling around about Rachael before she addressed anything or Chris H. said anything, he was there for her and dismissed them as rumors. He heard things that were heartbreaking and you pray they are not true. And when you find out that they are, it makes you question everything.

He knows in the south there are events, people, and places where he is not welcome. She apologized for everything, but he wasn’t ok. It was in the moment, the conversations that he had with her, she may not understand what he feels like being black in America. He has taken a step back to let Rachael put in the work.

They are no longer together. It was a tough conversation and heartbreaking. Matt says that even though plantations were a long time ago, it still matters. Emmanuel asks him why he couldn’t teach her, this is something that happened three years ago. And, can he still condemn her for her actions in 2021 for something they did in 2018. Matt doesn’t think anyone is irredeemable. It just not a situation that he can help him, so he stepped back.

Rachael comes on to the stage with Emmanuel, Matt is not there. She says that has been a lot as anyone can imagine, and she is not going to sit there and victimize herself. He talks about the Antebellum party. He shows the photo of her at the party, she says she sees someone who was living in ignorance without even thinking about who it would be hurting. She never asked herself what was behind it or why they were wearing those dresses.

He asks her who she blames for her ignorance, she says she won’t blame anyone. She says people need to realize that saying this is normal where I come from, is not ok. He says history is meant to be remembered, not celebrated. He asks her w

hat took her so long to apologize. She says she wanted herself to really understand why people were so hurt by this. She says she never thought the photos would come out and ruin her life because at that time, she was just taking photos with her friends and she didn’t know the trauma that it would cause. She says that when Matt called her to end things, she was very confused, very blindsided, but once that went away, she thought about how strong their relationship was, and she knew that he must have been really hurt by everything. In the process, she lost the love of her life.

Matt comes out, goes right to Rachael, and hugs her, politely. She looks at Matt and tells him that she is really sorry, once she tried to put herself in his shoes, she knows that their love was real and their relationship was strong, so for him to end things, he had to be hurting very badly and she is sorry that she didn’t understand initially and she is sorry that she hurt him.

Matt says it is heartbreaking and devastating, disappointing. Matt looks like he is going to cry, clearly, these two are in love with each other. She reaches out to him and rubs his shoulder. Finally, they hold hands. He says the most disappointing thing for him is that he had to explain to her why what he saw was problematic and why he was upset. He questioned their relationship because she didn’t understand his blackness. He knows that he had to take a step back for her to put in the work that she outlined and that is why they can’t be in a relationship.

Rachael says she tried to explain to him that he was the only reason why she decided to do the show, and that includes every single part of him, and his being a black man. She doesn’t see anyone out there for her, and she doesn’t see how she can have these same feelings for someone else. Emmanuel asks Matt if the door is even slightly open for a relationship reconciliation. Matt says his feelings for her don’t go away overnight, he doesn’t like to see her upset but he shouldn’t be emotionally responsible for them.

He wants her to do this work that she needs to do, this is the best thing that could come out of this and this is something that she has to do on her own. Rachael is crying, Matt looks sad. She says that since day one she wanted just what was best for him and she is sorry, she thanks God for putting him in her life, to begin with, and she will always be thankful for everything they shared when they were together. Emmanuel asks if they want to share one final embrace, Rachel looks like she wants to but Matt doesn’t. Matt says that he doesn’t know if it ever not hurt hearing “those” things. Emmanuel tells them that he is sorry things ended this way and wishes the two of them well.

There will be two new Bachelorettes in 2021, Katie Thurston who was eliminated in 10th place on season 25 of The Bachelor with Matt James, and Michelle Young who came in second place.