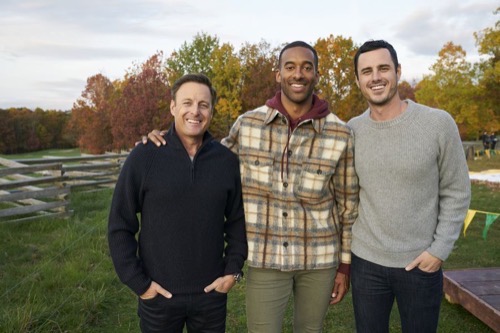 Emotions in the house continue to run high, leading to a trash-talking face-off between Victoria and Katie, and even former Bachelor Ben Higgins and Bachelor Nation favorite Wells Adams can’t diffuse the drama as things get physical on two group dates. Chelsea takes the opportunity to get real with Matt about her journey to self-love, and Chris Harrison drops a bombshell that will change the course of the season.”

Matt is having a hard time dealing with Sarah left, what if there are more women that don’t want to be a part of his journey. Meanwhile, the women are talking about Sarah leaving and Victoria says the trash has been put out. Katie tells her that she is gone and there is no reason to continue bashing her. Victoria tells Katie matter of fact, she will do whatever she wants. Katie tells her to go ahead then and continue to be toxic and rude about it. Victoria tells her to shut up. The women are worried that this might fog up Matt for the rest of the day and night.

Matt since with the women on his group date, he addresses Sarah’s leaving and says it just helps him to focus on what and who is important. MJ is the first woman to spend time with, she tells him that she worries about him and it is hard. Even the day was hard, Matt has a great time with the woman and loves how much they opened up to him.

Victoria asks to speak to Katie, she tells her that she doesn’t like how she shuts her down in group conversations. And, she would love an apology, she was just expressing herself. Katie says name calling is not expressing herself, it is just toxic and rude. Victoria starts to talk about Katie’s vibrator, she tells her she is confident about it and it is not her business. Victoria wants that apology and Katie tells her that she is not getting it. On the date, Matt gives his group date rose to Chelsea, who couldn’t be happier. Matt thanks them all for an amazing evening.

It is time for the cocktail party for before the rose ceremony. Apparently Anna wants to have time with Matt first and Victoria says no way, she is Elsa and she is going fist. But, she doesn’t and looks like she is about to crack. Matt loves being around Kit and she impresses him so much. The more time he spends with these ladies the more his connections are growing. Eventually, Victoria gets her time with Matt, but Chris interrupts them. Victoria doesn’t want to feel this annoyed, but she is.

The rest of the women see Matt and Chris make a beeline for the front door and they feel the energy is different. There is a lot of speculation that Sarah is back. Chris tells Matt that the purpose of his being there is to meet the woman of his dreams, and maybe he has already, maybe not. Because Matt was the Bachelor, there were an overwhelming response to be on the show, so they are adding a few more women. Chris tells him to let the journey begin, and he walks away.

The first woman to get out of the limo is Brittany, she is 23 years-old and a model from Chicago, IL, she leans right in for a kiss and says she wants to make up for lost time. Behind the cameras, Victoria calls Brittany a slut and a whore. Michelle is next, she is 27 and a teacher from Edina, MN. Then Ryan, 26 years-old dancer/choreographer from Brooklyn, NY. Kim, 28 years-old ICU nurse from Los Angeles, CA. Catalina, 29 year-old former Miss Puerto Rico from Caguas, Puerto Rico. Catalina has a crown on her head and when she walks in the house Victoria tells her that she is the queen and she is the one who should have the crown on her head. Catalina takes it off and gives it to her, Victoria puts it on for a bit, then takes it off and puts it on the table.

Matt is overwhelmed, five more women make the decisions tougher. And, there is 100% chance there will be hostility and drama. Meanwhile, the original women are not great and afraid that they are going to be put on the back burner. Matt returns to the room and welcomes the new women with a toast. Victoria asks him if they can finish their conversation, he says yes. As Victoria is talking to him, Brittany interrupts her and takes over with Matt. Kyaylah is upset, she can’t believe the more women have now been put into the equation. Mari wants to know what Matt is thinking right now, she is concerned about herself and her feelings.

Time for the Rose Ceremony, Matt tells Chris he never could have imagined getting another five women and the room as really tense.

Once the women leave who did not get a rose, Catalina makes a toast to the remaining women, but not without Victoria doing an extreme eye roll. MJ thinks the new women are naïve and don’t know what they are getting into.

The next morning, Chris visits with the women and welcomes the new women. Matt gave four out of five of the new women roses and the heat is on. Victoria says she is going to show them who is queen of the cancel and hopefully they drop like flies. Chris drops a group date card on the table, it is for Mari, Bri, Abigail, Brittany, Ryan, Catalina, Magi, Anna, Victoria, “let’s fall in love.”

Ben Higgins from The Bachelor Season 20 visits with Matt who wants his input about the process. Matt is happy to speak to Ben, he felt the tension in the room and he wants to make sure he is doing the right thing.

Ben and Matt meet with the women for his group date and Ben tells them he is setting up an obstacle course called, “fall in love fest.” Station 1 is where they get into a thousand pound pumpkin and row across the lake where Matt will be waiting for them. It is a foot race to station 2 where they have to put on squirrel costumes and find their acorn and carry it like a squirrel, walk across the balance beam and drop it in the bucket, and it is a foot race to the finish. The winner is going to get a very special prize. Mari wins, she gets an acorn trophy.

Time for the after party, Matt says he loves the after party so they can get to know each other better. Anna is thrilled that Matt grabs her first to sit down and chat with her. Later Victoria tells Anna that Brittany making out with Matt when she met him was slutty. Anna tells her that being from Chicago like her, she has heard rumours about her. People have gone out of there way to tell her to stay away from her, because she is entertaining men for money. Because Brittany knows all the rich men in Chicago, that is where the rumour came from.

Another date card arrives, this one is for Michelle, “let’s make up for lost time.” MJ is bummed, Michelle is going to have more time with Matt than she, and she has been there from the beginning.

Matt decides to give the group date rose to Bri. Anna asks Brittany if she can speak to her, she says coming into this she was getting messages form people in Chicago saying watch out for her, she is an escort. Brittany says she is not an escort, and that is so ridiculous to say. And making a conclusion about her before even getting to know her is bs. She feels everyone is against her right now, Victoria tells her to get out of the house. Anna’s intention was to start stuff and Ryan thinks it is disgusting.

In a perfect world the women would not want anymore drama, but with Brittany, it can only get worse.

It is time for Michelle to have her one-on-one date with Matt. They are going on a scavenger hunt that was constructed by Chris. H. The first clue is about a leap of faith, they both get harnassed up and have to zip line across the wilderness. Michelle lands first, she beats Matt. Then they pop balloons to find their next clue. Next, it is a hot air balloon ride. The other women see the hot air balloon and Victoria says she wants to vomit.

Another group date card arrives, this one is for Katie, Pieper, Serena P., Rachael, Kit, Chelsea, Jessenia, Lauren, Serena C., MJ, “are you willing to fight for love?” Meanwhile, it is time for dinner for Matt and Michelle. They talk about her teaching, she says she always wanted to do something where she was helping people, making a difference. He offers her the rose and Michelle says she had the best date that anyone could hope for.

Brittany is really upset about the rumour that she is an escort and Katie sympathizes with her, she has rumours said about her and it is not a pleasant situation to be in.

Matt is working out and the women arrive for their date. He says being physically fit and active is a big part of his life and it only feels appropriate to invite former five-time world boxing champion, Mia St. John. She tells the women that they are going to be fighting in front of a live audience. So this part of the date is practice.

Wells Adams joins Chris H. in the judges box. Katie and Jessenia are first, Kate wins. Serena C., vs. Kit, Serena C. wins. In one of the matches, Lauren gets a jab to the throat.

Time for the after party, Matt felt that the early part of the date was very stressful and he makes a toast to the women. Rachael is the first one to spend time with Matt and she is thrilled, they seal their chat with a kiss. One after the other, Matt is making out with the women.

Anna and Victoria are talking, Victoria say that Brittany is serial killer weird and she could be an escort, and Catalina is the dumbest ho she has ever met.

Katie goes to Matt and tells him about the bullying in the house, and the nasty things being said about the new girls, that could ruin on of the women’s lives. She asks him to address it the next morning, in front of all the women