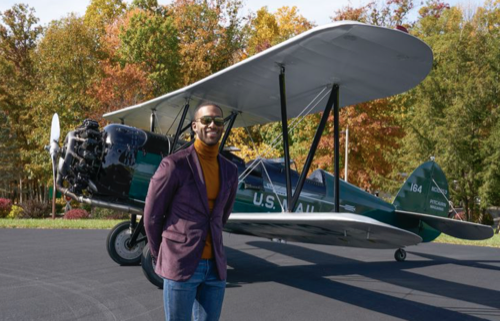 The women are freaking out when a tall beautiful blond woman walks in the door, it is Heather Martin from Colton’s season, and Pieper is not impressed when she is the one that is interrupted when she is having her time with Matt.

Pieper returns to the women and Matt welcomes Heather. Pieper is shaking, Heather just marched in a took over. Heather tells Matt that Hannah visited her and urged her to go on the show to meet him and it would kill her if she didn’t try. In the other room, Pieper is crying because she feels she doesn’t deserve this. Matt never met Heather, but he respects Hannah’s decision in suggesting she be there. Matt tells her that he needs some time to think about and he is excited about it and doesn’t want to leave there with any doubts.

Hannah goes to the room with the women, they ask her why she is there, she says to meet Matt. She says she is friends with Hannah and didn’t think anything of it when Hannah said that they would be a good match. The women accuse her of “Bachelor hopping.” Hannah says she doesn’t want to be on TV, she just wants to meet Matt. Pieper says she doesn’t care and wants an apology. Hannah apologizes. They really come at her hard and tell her to go home.

Matt sits with Heather, he says her being bold and following her heart is impressive and Hannah’s opinion means a lot to him. And, this far into the process, he doesn’t know how it would work. She says she is doing it seriously, not to be on the show, but to be with him. He says he is following in love with one of the women now and he has to follow his heart. Matt tells her that time is not on their side and his heart is pulling him another way. Matt walks her out, and the other women couldn’t be happier.

Matt returns to the other and apologizes to them, he says he was caught off guard and there isn’t going to be anyone joining this journey who is not on the couch that they are sitting on. Matt apologizes to Pieper and asks if they continue their conversation. The women are thrilled and hoping for no more drama. Chris comes in, he says they are going right into the Rose Ceremony.

Going into the Rose Ceremony, Michelle and Pieper have roses, eight women don’t. They can be as confident as can be, but some are going home tonight.

Matt has some difficult decisions to make because he has some kind of connection with each woman. The next day, Abigail feels recharged and more confident in her relationship with Matt and she hopes that she finally gets her one-on-one time with Matt. Chris H. walks into the room, he tells them those home towns around the corner, so dates are huge this week. He drops the first date card, it is for Serena P., “can our love go deeper.” Abigail feels like it is a slap in the face, she hasn’t even had a one on one yet, she can’t figure out where his head is at.

Matt has chosen Serena P., because they are in the friend zone and he wants to know if the relationship can go to the next level. On their date, they are going to be doing tantric yoga. Matt is going headfirst into this. Matt is just vibing and enjoying the yoga. Next, the instructor puts them in sex position yoga and it is not something that Serena P., would have chosen on a first date. She feels that Matt is more affectionate than her. And, she was just waiting for it to be over. After, she tells Matt that it is the first and last experience for her. She tells him that she is not an overly affectionate person, especially in public. He says he liked when they were close and staring at each other, he felt naked. He tells her that when she doesn’t like something he appreciates that she tells him. Matt feels horrible that she felt uncomfortable.

A group date card arrives, Pieper, Michelle, Rachael, Bri, Kit, Abigail, ”love will always find a way.” Jessenia is thrilled, she is getting the one on one.

At dinner, Matt tells Serena P., that he is happy that she was honest with her and that is what he is attracted to her for. Meanwhile, Abigail and Kit are talking, Abigail says she doesn’t know where Matt’s head is, she got the first impression rose, a group rose, and no chance to explore that potential. Matt tells Serena P., that he likes her a lot and would want her family’s approval. She says he has nothing to worry about, her sister might grill him a bit, but they are all harmless. She says she is surprised that she does have feelings for him, and she wants him to meet her family. Matt pulls out the rose, he says he is very much looking forward to meeting her family.

It is time for the group date, tonight is everything when Matt will decide who is going to get those hometown dates. Matt tells them that he wants them to put everything on the table tonight. Bri really wants that rose tonight, she is starting to have feelings for him and wants to tell him what she gave up to be there. They sit down together and Matt tells her that every week it is getting more real. She tells him there are things she wants to tell him. A few days ago she resigned from her position to be there. It was a decision she had to make, after weighing what this journey could mean to her, with him specifically, she knew it was going to be worth it. Her mom was a single mom and she had to make a lot of sacrifices for her and being here with him makes everything worth it. He says he had no idea and it means everything to him. He kisses her.

Abigail is struggling with the fact that they are hitting hometowns and she is the only one who has never had a one on one with him. On the first night, she had the most amazing feeling, and now she feels stalled. She sits down with Matt and tells him the week has been hard. All she has wanted is more time, they have had great conversations, she opened up to him and he did to her and she felt good, they want a lot of the same things in life. She asks him if he sees a possibility with her, or, well she wants to know now. He says from night one he was instantly drawn to her, he was so comfortable in their relationship that he explored other relationships and in exploring them with other women, I did grow strong feelings for them and his heart is going in another direction, and he apologizes. The last thing he wants to do is lead her on and lie to her, she deserves someone who is truthful to her. Matt walks her out.

Matt goes to tell the other women that he sent Abigail home. It just goes to show that none of them really know where his mind is. Rachael is next to sit down with him. He reassures him that they are ok and she makes him smile, he doesn’t want her going anywhere.

Kit is afraid and excited and the same time. She has a great connection with Matt, but she has no idea where they stand. She sits down with him and tells him this is a very intense process for her. She tells him that there are things in her life that she is not willing to compromise on, that is being able to finish school, travel, and figure out her career path. She is looking for someone who is going to be her cheerleader and help her grow on her path, which means that she wouldn’t want to have kids until she is twenty-five or six, she is a long-term investment. Matt smiles and thanks to her. He says he just wants to be living right and being with the right person. Being with her excites her. She is definitely falling in love and she is now confident that she is going to get the rose.

Matt tells the woman that this is the hardest group date rose to give out, and there is only one, he decides to give it to Rachael. He leaves with Rachel and tells the other women he will see them at the Rose Ceremony. Matt and Rachael arrive in a room where Aloe Blacc is there to sing to them, they dance and Rachael is on top of the world. The other women are left heartbroken and crying, questioning their relationship with Matt. Meanwhile, Matt is excited about where he is and looks forward to his hometowns.

There is a knock at Matt’s door, it is Kit and she says she needs to speak to him. After their one on one said that she could fall in love with him, she never let her guard down with anyone like him, and she thought she would have the clarity going into the hometowns, but she doesn’t. He tells her that she means a lot to him, and this is hard, but the fact that she knows what she wants and who she is, is why he is attracted to her. He likes her a lot and wants her there. Kit says he’s saying that makes this even harder but she is unwavering, she knows what he deserves and the right thing for both of them is if she leaves.

It is time for Jessenia’s date with Matt, the date card said, “our love can take a turn,” which she doesn’t feel is that promising but she will do anything to spend time with Matt. Jessenia is in a lot, Matt shows up in a fast sports car and says he wasn’t driving, it was his friend, he is a professional drifter. Jessenia is driving and she spins the car around and Matt looks shocked. At dinner, she tells him that she is falling in love would him and would be honored if they go into hometowns together. But to be honest, Matt doesn’t have those feelings for her. He tells her that he enjoys her boldness and how she carries herself, but he needs intangible love that drives them towards an engagement and he doesn’t think they are there. Knowing that he cannot give her that love, he cannot give her the rose and he walks her out. Jessenia feels blindsided, that is not at all what she expected.

Time for the Rose Ceremony, the first rose goes to Bri, the second goes to Michelle. Pieper is going home.