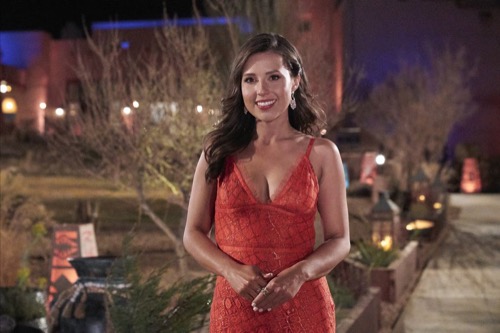 The Bachelorette airs on ABC this evening with an all-new Monday, June 7, 2021, episode, and we have your weekly The Bachelorette premiere recap below. In tonight’s season 17 episode 1 as per the ABC synopsis, “Twenty-nine charming men and one mystery box hope to get lucky in love with new bachelorette Katie Thurston; Kaitlyn Bristowe and Tayshia Adams offer advice; Katie selects 23 lucky bachelors to continue to get to know.”

In tonight’s The Bachelorette episode, the episode begins with a preview of this season 17 in its entirety. There is going to be lots of love, and lots of drama. In Seattle, WA Katie Thurston is The Bachelorette and she is just speechless. She is very grateful, she wants to fall in love and start a family. There is nothing traditional about the family life that she had. Her parents divorced when she was a baby, she was brought up poor and went to five different elementary schools. She wants to find someone who will be her partner and she can be herself with, she will not settle.

Hyatt Regency Tamaya Resort & Spa, Katie arrives in her suite and looks forward to finding the love of her life. She knows this is the first day of the rest of her life, no matter how cheesy it sounds. As excited as she is, she is nervous, she has never dated thirty guys before.

Bachelorettes Tayshia Adams and Kaitlyn Bristowe will be co-hosting this season together, filling in for Chris Harrison who stepped away from the franchise.

The men are en route and excited, they are also staying at the same resort and their stories will start there. Connor B. is a Math Teacher but also a musician, Karl is a Motivational Speaker who is always moving and traveling, Brendan is a firefight from Canada whose dad wanted him to play hockey for a living, Andrew S. plays football in Vienna, Austria and he travels a lot, Mike is a Gym Owner who says sports has humbled him and he is a virgin, Justin is an Investment Sales Consultant who has been drawing and painting since he was four years old and he is working on something special for Katie, Tre is a Software Engineer who is into rap music and classical music, Greg is a Marketing Sales Rep who is the youngest of four in his family and he has lots of nieces and nephews.

Katie is ready to navigate this journey on her own, she doesn’t know that Tayshia and Kaitlyn are there with her and she gets a huge surprise when she sees them. They tell her they are there to help her, to be there for her. They have been in Katie’s shows and believe they can help her navigate all these relationships. Kaitlyn says don’t rule anyone out at night one. Katie says she will kiss a guy night one, and even though she is funny, she needs a grown man. Katie is confident that she will find the man of her dreams.

The first limo pulls up, the journey begins. Thomas is the first one out of the limo, he tells her that he is nervous and he has a deep admiration for her for doing this. Aaron is next, he tells her she looks amazing, radiant. Andrew M. keeps saying wow as he looks at her. David says anything can happen in a New York minute. Michael brought her a gift, he gives her a watch that has been in her family for two hundred years – then he starts laughing, he got it at the airport, the message is that time is precious.

A pickup truck shows up and Tre comes out the back from a makeshift ball pit, he tells her that he wants to have a ball with her.

Limo #2 has arrived, Greg is first out and he first compliments her on looking amazing. Gabriel arrives and gives Katie a cringy hug, can’t tell if she enjoyed it, she has an awkward face. John says he feels like he is in a dream and she looks wonderful, gorgeous. Garrett says he is super into her. Austin says he is in pursuit of happiness. Marty says he is serious and why not them. Landon says he is there to put a smile on her beautiful face. Karl is excited to get to know her. Josh says he is 100% there for her.

An old 1920’s limo shows up, Andrew S. comes out and calls her “my love,” he talks with a delicious accent, then he laughs and says he is originally from Chicago. Brandon shows up on a moped, he brought his baseball glove and he pulls out his jockstrap. Hunter brings a fish and says she is a catch. A motor home drives up, it looks like a Breaking Bad RV and Jeff gets out, he drove his home there from Jersey. Two men roll down a huge present, Katie is so nervous, she doesn’t know what to do, a voice inside tells her to meet him inside. The two men roll the present away.

Brendan tells her that she looks absolutely incredible and he is honored and excited to be there for her journey. Marcus is super excited to see her. Mike tells her that she is gorgeous and he heard a lot about her. Cody tells her that there has been someone in his life who has helped him, they have been intimate and best friends and he wants her to meet her – he goes back to the limo and brings out Sandy, a blow-up doll, Justin says that he would just stroke it out – he brings out a paintbrush, Christian brings a genie lamp and says they can rub it together, Quartney tells her that she is absolutely beautiful and worth the quarantine, Connor B. shows up in a cat costume because she is a huge cat lover. Meanwhile, James is still sitting inside the giant present and hasn’t been opened yet. Outside, Tayshia and Kaitlyn tell her to not be nervous, Katie admits that she is partial to the cat.

Katie didn’t know what to expect and she can’t believe how many nice guys there are. Inside the cocktail room, Katie tells her that she appreciates every one of them and the quarantine sucked. She is there because she believes in it and she hopes they believe in it as well. She tells everyone to raise a glass and cheers to love.

Katie is ready to be engaged and believes in this process. Katie sits down with Andrew S. and she speaks with an accent to join him and the two have fun. Thomas is next and he thanks her for being a calming presence, he didn’t know what to expect. He goes on to say that the toast was amazing and he can’t stop smiling, he is so excited that she is her. Katie is blushing with Thomas. Greg is so nervous, he brings Katie a necklace that his niece made out of macaroni.

It seems like every single guy is the whole package and Katie is enjoying it to the fullest.

Tre takes Katie out to the pickup and they sit in the ball pit together. And, Justin is the first one to kiss her, she really left him wanting more. The first impression rose is put on a table and to get that, means a lot on the first night.

Everyone wants time with Katie and there is a lot of savagery going on. Jeff brings Katie into his RV, he has vegetables and Ice Tea for the two of them. Katie says the RV is definitely lived in, and he is throwing his dirty boxers to the side and chewing on celery while they are talking. Inside, Hunter is worried that he has had no time with Katie yet. James is still in the box and he is not prepared to stay in there for too much longer. Finally, Katie opens up her present and it is James, she says that he is super hot and something intrigues her, they were talking without talking. Michael tells Katie that he has a four-year-old son and she takes it very well.

Katie goes to get the first impression Rose, she gives it to Greg. They sit down together and she tells him that she appreciates him opening up and she feels there is a great guy inside. Greg can’t believe he got the rose, he kisses her, well she kisses him.